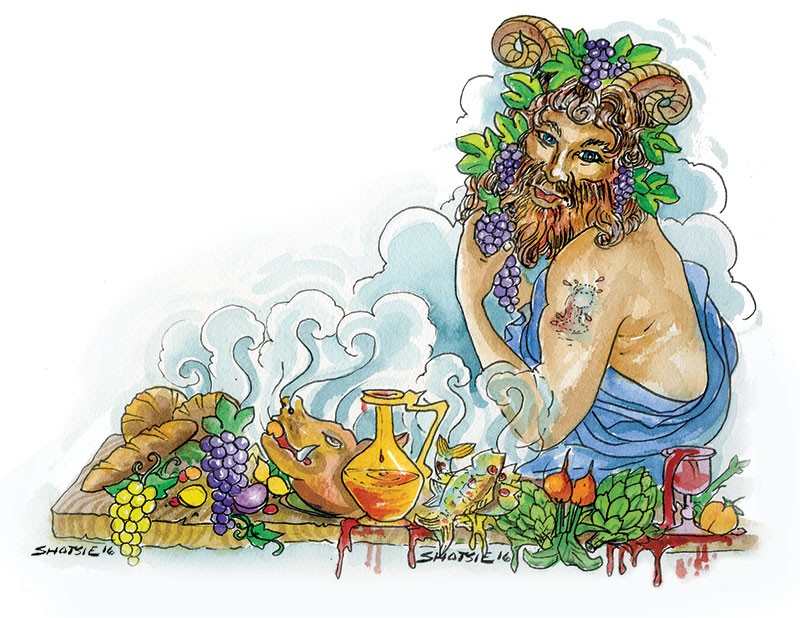 Best Chef We’re Grateful to Still Have Around

Last year, friends and fans of Casino Bar & Grill chef Mark Malicki were saddened to hear he was ill with late-stage Crohn’s disease and was in need of extensive surgery. It didn’t look good. Sonoma County’s restaurant community rallied around Malicki and held fundraisers to help cover his medical bills. Even though Malicki’s weight dropped to the low triple digits, the good news is that he recovered and is back in the saddle creating his eclectic daily menus of West County soul food, genre-jumping meals rooted in locally sourced ingredients served in the coolest venue around, an old bar.

Malicki is not only a great chef, he’s a great person. Humbled by the support he got from the community, he offered down-on-their-luck fishermen hurting from the closure of the Dungeness crab fishery a meal on the house.
That’s the kind of social safety net we need more of. 17000 Bodega Hwy., Bodega. 707.876.3185.—S.H.

When you open a restaurant that flirts with new Jewish cuisine, a list of schmears is a must. Bird & Bottle, a recent addition to Santa Rosa’s food scene, has just that, with an $11 price tag. The chicken liver schmear arrives as a tiny, concentrated island of fatty goodness with four slices of grilled pumpernickel. The mousse is adorned with pickled shallots, maple syrup, cracklings and smoked salt, and it’s absolutely heavenly with just the right balance of sweet and savory, plus a cool interplay of textures. Spread the precious mix on a lonely piece of bread and congratulate yourself on money well spent. 1055 Fourth St., Santa Rosa. 707.568.4000.—F.T.

Aging spirits and cocktails in mini oak barrels isn’t a new trend, but Zazu restaurant mixologist extraordinaire Fred Johnson has taken the technique to new heights. The first Friday of the month, Johnson uncorks all the crazy projects he’s been working on for a night of his barrel-aged cocktails. As with wine, oak mellows spirits and adds new flavors. Johnson barrel-ages classic cocktails like Manhattans and Sazeracs (which are superb), but things get really interesting when he blends cocktails using infusions and decoctions of his own creation, many of them harvested from his backyard (try the Lion’s Mane if it’s available). The results are truly memorable. Add Johnson’s encyclopedic cocktail knowledge and a genuine love of his craft, and you’ve got one delicious drink. Or two. 6770 McKinley Ave., Sebastopol. 707523.4814.—S.H.

Ordering a cocktail can be tricky. Order a sophisticated one and you risk sounding like a snob. Stumble through the menu and ask for a martini, and you’ll be suspected of alcohol ignorance. In the soft-lit, stylish space of El Barrio, Guerneville’s more than worthy tequila and mezcal bar, you can avoid all that by simply ordering the michelada. The delicious and straightforward cocktail is based on Modelo Especial, a cheap Mexican beer, with the additions of housemade Sangrita (a chili-blood orange juice) and chile rum. For $7, the unpretentious drink comes decorated with a salt rim and delivers an instant vacation. 16230 Main St., Guerneville. 707.604.7601.—F.T.

Best Reason to Bank With Chase

You don’t generally think of your bank when you’re thinking about that afternoon cup of pick-me-up coffee, but then there’s the Chase Bank in downtown Santa Rosa, a vast emporium of fees and fines and pleasant people, which also happens to offer free coffee and lollipops, and the occasional plate of sugar cookies—with sprinkles, no less. It’s a very welcome gesture. Would you like a balance statement? No, but could you put out some ham sandwiches next time we’re overdrawn and hungry the day before payday? 835 Fourth St., Santa Rosa. 707.576.3003.—T.G.

Napa’s Ninebark is three restaurants in one. The ground floor is a beautiful bar with classic cocktails and a menu of great snacks like the salt cod beignets. Take the elevator to the third floor and step into a swanky cocktail lounge with an outdoor patio that looks right down on the Napa River and the Third Street Bridge. The cocktails here are a little more upscale than the downstairs bar. (Try the Old Ball Game, $16, a riff on an Old Fashioned made with popcorn and peanut–infused rye—think Cracker Jack and a whiff of leather-steeped grain alcohol served with a single, hand-shaped ice globe. It’s supposed to taste like a baseball game complete with essence of catcher’s mitt.) There’s a great list of sophisticated snacks or “provisions,” too. Grab a drink or a bite here before heading down to the second floor dining room. This is where wunderkind chef Matthew Lightner creates his exciting yet approachable cuisine. 813 Main St., Napa. 707.226.7821.—S.H.

Cloverdale doesn’t get the culinary attention that southern neighbor Healdsburg does, but the city’s new Trading Post Bakery is a surprise: bright, delicious and big-city cool. Owned by the team behind San Francisco’s AQ restaurant, the small bakery created quite a buzz when it opened last summer, only to close a few months later, due to construction of the upcoming restaurant portion. No worries, though, the place behind the “7 or More” seeded wheat loaf and the already famous toast with jam is reopening this March with a vengeance—salads, sandwiches and other elevated lunch and dinner options will join the amazing pastries. Stay tuned. 102 S. Cloverdale Blvd., Cloverdale. 707.894.6483.—F.T.

You know the feeling you get after you get your car’s oil changed? You feel like you did something positive for your vehicle and it runs better and feels happier. That’s what eating at Santa Rosa’s new Seed to Leaf is like—it’s an oil change for your body. The restaurant serves an encyclopedic list of super-foods and fresh organic fruit and vegetables that taste as good as they are good for you. Look for delicious smoothies, nourishing “tonics”—try the Focus tonic made with a tongue-twisting blend of schizandra berries, Siberian ginseng, chuan xiong (a Chinese medicinal rhizome), chrysanthemum, goji berries, reishi mushroom and warm almond milk—salads and meatless entrées like walnut-based “tacos” and a jackfruit “barbecue” sandwich. Yes, it’s all vegan, but mainly it just tastes good and makes you feel good. You won’t miss the meat. 25 Old Courthouse Square, Santa Rosa. 707.978.4043.—S.H.

Best Time to Squeeze Your Cheesemaker

Love the North Bay’s locally made artisan cheese so much you could just hug the cheesemakers? California’s Artisan Cheese Festival, held annually in Petaluma, makes it possible to get up close and personal—at least, with the cows, goats and sheep that contribute the main ingredient to the North Bay’s quiet revolution in quality dairy products. Now in its 10th year, the festival has stepped up its popular tour schedule in recent years, bringing curd-addled thrill seekers across the cow-patty curtain—in those glossy, black Pure Luxury Transportation buses more often seen plying the winetasting routes of Napa Valley—to Sonoma and Marin County farms and creameries for educational tours. At McClelland’s Dairy in Two Rock, participants can try their hand—literally, their hand—at drawing milk the old fashioned way. But the tours also coincide with baby goat season, and it turns out that when the tour leader says, “Does anyone want to hold a baby goat?” everyone wants to hold an adorable baby goat, the tour is forgotten about, and time stops. The 10th annual Artisan Cheese Festival kicks off two days of farm and creamery tours on Friday, March 18, before the Grand Tasting on Sunday, March 20. Sheraton Petaluma, 745 Baywood Drive, Petaluma.—J.K.

Thanks to the paleo diet fad, bone broth, peasant food if there ever was any, is trendy. It’s nourishing and delicious stuff. It’s easy to make but it takes forever—24 hours is about right. I suggest making a big batch and freezing it for later, but until then, the good news is that there’s the Bone Broth Company. The Sebastopol-based company sells its stuff at the Santa Rosa and Sebastopol farmers markets, but you can also get the broth (beef, pork, chicken, lamb and buffalo) in the frozen section at Community Market, Andy’s Market and Shelton Market. Grab one of the glass jars, and you’ve got a delicious liquid dinner—once you defrost the jar, that is. facebook.com/thebonebrothcompany.—S.H.

Best Marriage of Sweet and Heat

Cider has been trending for a while and 2016 looks like the year of tweaks and creative takes on the classic fermented beverage. Sonoma Cider, the one with the cool graphics and funny names, is a regional star with bearded and beanie-clad Robert Cordtz and James Williams steadily leading the small brand toward national stardom. Out-of-the-box flavors include the bourbon-tinged Anvil and the oddball, root beer–inspired Washboard, but the wildest, boldest option is the limited-edition Crowbar. Flavored with habanero chile and lime, this is, according to the website, “a portable fiesta in a can” or just a wonderfully crisp, tangy and refreshing cider that’s an easy favorite. 30 Mill St., Healdsburg. 707.433.8212.—F.T.

There’s really no contest here. The boys at Ramen Gaijin serve up the best ramen north of the Golden Gate Bridge. In fact, it’s better than lots of places you’ll find south of the bridge. The shoyu ramen, made from largely locally sourced ingredients, is an instant North Bay classic. And now that they’re open again after an extensive remodel and added a Scott Beattie–masterminded cocktail program and an exciting izakaya (Japanese tapas) menu to go with it, the place is a triple threat of Japanese-inspired gustatory delights. 6848 Sebastopol Ave., Sebastopol. 707. 827.3609. www.ramengaijin.com.—S.H.