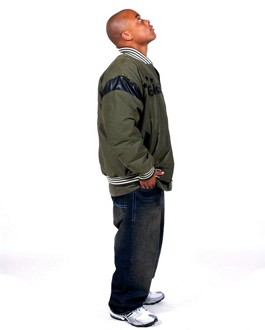 Shaya passes up hip-hop trends for a look within

In his apartment up near the airport, with a hand stamp still on the back of his palm from the Giants vs. Dodgers game the day before, Shaya explains the impetus behind his music. “I want people to take away something they can relate to,” he says. “It’s sorta like thought-provoking music. I’m trying to revive the thought-provoking stuff instead of it just bein’ somethin’ that goes in one ear and out the other.”

With Fallen Awake, released last month, the 30-year-old Santa Rosa MC has more than hit that goal. Full of positive vibes and earthy production, the album is a severely promising first step into the arena that even he himself acknowledges is overpopulated. “Everyone raps, everywhere you turn,” he says. “But I didn’t know anything about the industry except for what I read inside CDs. Most people don’t read the notes inside of the insert, but I would read them and write down on paper who I wanted to work with.”

It worked. With G-Unit producer Jake One behind the hard-hitting “Fall Back” and a slew of other up-and-coming producers on other standout tracks, Fallen Awake is a 14-course serving of East Coast&–style hip hop—Philly-soul string breaks lie smooth above scattered Dilla-esque beats. But it’s Shaya’s natural command of the mic that elevates the album from just another indie-rap release. Shaya acquired the talent at a young age, in unusual fashion: by transcribing L. L. Cool J lyrics in a notebook, and then replacing the words, one by one, with his own.

Never one for trends (best dis in 2008: “You the past, bro / Gone like hyphy”), Shaya opts for the classics, reclining in a Jimi Hendrix T-shirt and citing Q-Tip of A Tribe Called Quest as his favorite MC. But it was Los Angeles rapper Ras Kass, whom Shaya met outside S.F.’s Maritime Hall, who gave the up-and-comer his best advice. “I was talkin’ to him about my stuff, telling him, ‘I’ll be the next you,'” says Shaya, “and he was like, ‘No, man. Be the next you.'”

One song, “Thinking Cap,” tells the story of Shaya’s self-discovery. In a series of questions to himself, he settles on the album’s spiritual core: “Someday, I want to fly and let my wings spread wide / I survive with lazy vision so they tell me love is blind / They say this is my best shit, but I don’t really know / Maybe writin’ what I feel’ll give me character to grow.”

Personal growth and artistic growth go hand in hand, but in hip-hop, it’s career growth that’s the most elusive. On “Industry Life,” Shaya raps that “my album’s the biggest secret in the Bay on the unda.” If even the smallest whisper of it gets out, it won’t be for long.