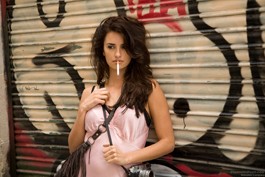 Something Mediterranean has gotten into Woody Allen, and it’s about time. Vicky Cristina Barcelona is Allen’s strongest film in years, his most affable and least haunted. The sneaky sensualist in Allen has evolved into something less tentative; there’s a Henry Miller quality to the romantic misadventures here.

The film starts with a splash of mosaics at the Barcelona airport as a narrator (Christopher Evan Welch) describes two arrivals for a summer holiday, and they’re as unlike each other as Snow White and Rose Red. Chronic dissatisfaction syndrome sufferer Cristina (Scarlett Johansson) has just dumped her New York boyfriend and disowned the 12-minute film she’s worked on for months, while her more staid traveling companion, Vicky (Rebecca Hall), is destined to settle down to a life of dull safety with her fiancé as soon as she gets back to the United States.

At a restaurant, the two young women are simultaneously picked up—gently but bluntly—by Juan Antonio (Javier Bardem), a successful artist. He wants to fly the two of them into a nearby town, and thence into the space of one large bed. Few actors can carry off the double-seducer role as well as Bardem, and his smokiness keeps the film far away from lecherous ickiness. Also, Juan Antonio has his own cross to bear: his violent yet needy ex-wife, Maria Elena (Penélope Cruz), who is also a painter. She once perforated him with a knife, and she’s not completely out of the picture yet.

There are some performers in Vicky Cristina Barcelona who seem especially handicapped by having to speak English. Let’s blame the treacherous language instead of them. Cruz is ravishing here, even in awkward poses, as when she’s seen from a high angle shot with her pant legs wadded up to her knees, straddling a canvas she’s working on. Johansson’s hair is dyed a convincing gold, and fine as she is, she is just part of the four-sided triangle. She doesn’t distract from Cruz, nor the fascinating Hall, a dark, handsome physical type who doesn’t get idealized in the movies very often.

Naturally, Barcelona does its stuff, with feast-day fireworks, the Gaudi tour and the bird market at Las Ramblas. Over these scenes, the narration can sometimes Rick-Steves-it up. When it describes feelings and apprehensions, it also seems unnecessary. There’s no need for a Flaubert tone when there’s so little space between the way the characters act and the way they’re thinking.

There’s also a certain flatness in the background characters. On one hand, the other members of the cast aren’t schticking relentlessly; on the other, they’re also not doing much of anything else, and at times one starts to miss the flow of jokes (there’s a good one about the obscene sound of the word “snorkeling”—leave it to a longtime comedy writer like Allen to not neglect the funny k sound).

American movies tend to suggest sexual freedom and then ringingly endorse monogamy as if it’s something they just invented. While Allen comes to his usual conclusion that anhedonia rules the world, he’s on the side of the libertines in his new film. That makes all the difference.