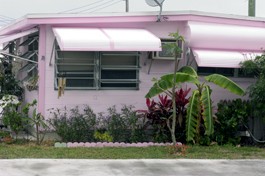 Owner Downer: Could 80 percent of Sonoma’s mobile-home park’s residents be classified at the poverty level should MHP condo conversion be pushed through?

Sonoma resident Sam DiGiacomo is worried about losing his home. “We are currently under a total frontal attack—senior citizens and low-income families alike,” he says.

DiGiacomo retired in 1996, after 30 years serving as a maintenance instructor with the Department of Defense; these days he’s passionate about protecting mobile-home park (MHP) rental spaces for persons of limited means. DiGiacomo, a chapter president for the statewide organization Golden State Manufactured-Home Owners League, also sits on the Tri-Park Committee, representing the city of Sonoma’s mobile-home owners.

“If it [MHP condo conversion] should happen here,” DiGiacomo says, “I am sure that 80 percent of our residents would almost immediately be classified as poverty level.”

Last September, California AB 1542, a bill sponsored by Santa Rosa assemblywomen Noreen Evans, was passed, only to be vetoed by the governor. Had the legislation been signed into law, it would have allowed manufactured-home owner-occupants statewide to retain their rent-controlled status, even if neighboring homeowners choose to purchase their lots.

Then came Proposition 98, which was designed to wipe out rent control altogether and pave the way for massive condo conversions of apartments and mobile-home parks across the state. Heavy hitters like Chicago developer Sam Zell, cited in the May 21 issue of the Bohemian as a major financial backer of the Prop. 98 initiative, tried to convince voters to pass the proposition in order to presumably protect basic property-ownership rights. But it got cold-cocked in this past June’s primary, garnering just 39 percent support, while over 65 percent of the voters gave the nod to rival Proposition 99, conceived specifically to counteract 98’s draconian strictures.

But even with Prop. 98 dead and buried, manufactured-home owners still face hurdles in a seemingly inexorable drive by the MHP industry to sell as many asphalt lots as mobile-home park owners care to offer. Present state law provides fewer protections to manufactured-home owners than do many county and municipal ordinances. This is certainly the case in Sonoma County, where over 50 percent of a mobile-home park’s resident owners must first opt to purchase what lies below them in order to convert, or, in the parlance that has emerged, condoize the entire park.

Now the fight to preserve low-income MHP rental space has shifted back to a municipality, in this case to Sonoma. On Wednesday, Aug. 20, the Sonoma City Council will vote on an ordinance that DiGiacomo claims will be “a tiny bit stronger” than the present Sonoma County protections. The ordinance is expected to pass, perhaps unanimously, but that doesn’t mean DiGiacomo or the city of Sonoma are out of the woods yet.

L. Sue Loftin is a San Diego County–based attorney for Preston Cook, the owner of Rancho de Sonoma mobile-home park. Cook’s park is situated just inside the city limits, and his intentions are clearly stated. “What I want to do with my park is make it a resident-owned community,” he says, “so the residents of Rancho de Sonoma have an opportunity to own the land, instead of just their homes.”

To realize his goal, Cook filed a claim on Aug. 6 against the moratorium on condo conversions. This claim appears to be the first step in a process that could lead to a lawsuit demanding big bucks from Sonoma, if, Loftin says, “we can’t resolve the issues with the city.”

Loftin says that Cook’s conversion plans include $2 million in park renovations, affordable loans to low-income residents choosing to purchase and continued rent control for those who choose not to buy until such time as they either die or move away.

Meanwhile, the media have portrayed a divided MHP population, the majority of whom are over 55 years of age and living on fixed incomes. An ABC television report that aired last month, as well as articles in various regional newspapers, stress that there are mobile-home owners who either favor or will consider purchasing the property beneath their units.

DiGiacomo says there’s no such rift. “It is notorious that they come up and try to disrupt the homeowners organization, and that is exactly what happened,” he explains. “An ad hoc committee got together to unseat the current board and the current president—which never happened.”

Close to 700 persons live in Sonoma’s three mobile-home parks. Monthly rents range from $350 to $800. But, DiGiacomo says, “We have heard quotes that they’ll charge upwards of $225,000 per space.” Whether that figure is inflated or not, one thing is sure: by adding monthly condo fees to mortgage payments, this once affordable form of housing is, as Cook himself told the Sonoma Index-Tribune recently, “an endangered species. I would say there will be thousands of park closures in the next 10 to 20 years.”