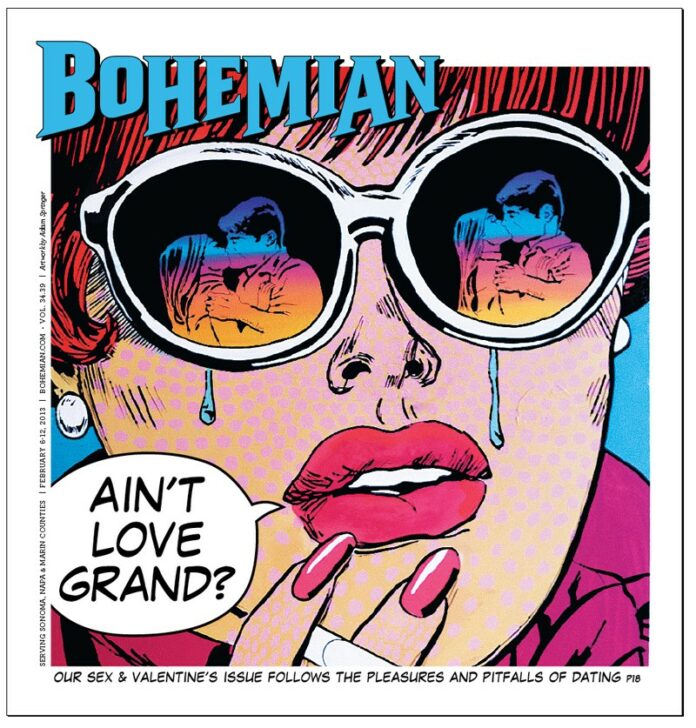 We asked for your bad-date stories, and boy, did you ever deliver. With a total of 16 real-life dates gone awry, submitted by readers, we here at the Bohemian have been gifted with sad anecdotes of Febreze-in-the-face spraying; meeting for the first time on an airport tarmac in a wedding dress; asking one’s daughter to call mid-date with an “emergency”; being surrounded by rowdy drunk sports fans on a bus and going to a Tommy Castro show.

But only three stories can make the cut, and we salute Flynn Alexander, Peter Danovich and Dani Burlison for bringing the goods. Congratulations to these winners, who have won their choice of a dinner at Ca’Momi in Napa, Hilltop in Novato, Downtown Joe’s in Napa or Pack Jack’s in Sebastopol—may it help your next date to be much better.

Also, an honorable mention goes to Mon Alisa Sydenham for her story of finding Mr. Right—and then, under his shirt, finding his swastika tattoos. Ouch.

On with the bad dates!

My personals ad-venture was working too well. I’d instantly poofed up three fearlessly vulnerable, awake, strong and communicative men who were craving a peer and anxious to share their profoundly insightful, disturbing spiritual dilemmas about the female nature. I was impressed and stunned.

I was seeking quick distraction from the heartbreak of having pushed away my rare and exquisite beloved for pushing me away after every deep connection one too many times, cursing his resistance to what he so badly wanted and what his soul had kept pushing him back to me for.

I was totally unprepared to discover that the world may actually be full of aware, confident, accomplished, emotionally articulate and possibly sexually masterful men who can’t find any women who match their evolvement.

Joe No. 1 had replied with a three-page, single-spaced letter describing how an anguished childhood birthed his deepest spiritual questions and blueprint for ideal love.

He drove one and a half hours and greeted me with a gift of broccoli. I said, “Oh, do you have a garden?” He said no.

During a walk, I was impressed by his first-date audacity to tell me that my shadow made me look like a Klingon. It was obvious, though, that he had sent a picture from 10 years earlier. I guess a shamelessly exposed interior doesn’t automatically imply an inhibition-free exterior.

Back indoors, musty no-chemistry permeated the air and tales of his 10-year heroin isolation evaporated any remaining cosmic edge I’d optimistically anticipated. To punctuate with finality, instead of being treated to a “soulful and Ray Charles–ish” piano performance, I had to endure torturous unfunky whining that made me struggle to keep my life force from draining as oxygen tried to flee the room.

Upon leaving, with wide eyes and effervescence, he professed how totally worthwhile it had been to make the long drive—but wasn’t sure when he’d ever do it again.

This farewell was a relief but left the sour task of trying to reconcile the hard evidence for rare quality I had poofed against the harsh reality that materialized. Same with Joes No. 2 and 3.

Turns out Joe-poofing isn’t that easy.

About three months into a short-lived relationship, I made the mistake of going on an extended date of sorts: traveling to his sister’s wedding with him. In Las Vegas. In July.

Things were already a little shaky with Mr. Anger Issues, in part because he constantly suggested I change careers (to work for him) and that maybe I give up work altogether in order to make him some babies. I made it clear that I love my career and that as much as I love the two children I already have, there was no way in hell I was having any more children. Especially when Mr. Anger Issues was unsure about whether or not he loved me (he once said I had too much student loan debt for him to fall in love with me).

So we’re in Vegas. Sweating and drunk from the sidewalk mojitos we’re pounding to fight the mid-July heat and the awkwardness that arose when his family members began asking about any potential wedding plans we were making (remember: three-month relationship). We push our way to the air-conditioned bar in our hotel when one of my kids calls me. Mr. Anger Issues tells me how much he likes her and how much he wants kids of his own.

“Yeah, I’m not having any more kids,” I remind him.

I look at the pitcher of margaritas in front of us, take a huge, brain-freezing gulp and quietly ask him for the hotel key.

“If you leave me alone in this bar right now I will fucking hate you forever,” he scowls.

I drink more, start a conversation with the drunk Scottish construction worker who has taken his place next to me at the bar and eventually return to the room with Mr. Anger Issues, who stays up all night watching recaps of the Tour de France on TV.

He doesn’t speak to me the next morning and, nervous about our flight home, I search for the Xanax in my bag. As we pull into the airport, I begin sweating and run to the restroom vomiting, realizing too late that I have accidentally taken his pain medication. Turns out I’m allergic to Vicodin.

Two hours of crying and dry-heaving later, I emerge from the restroom. He glares at me and offers this:

“Well, I don’t want kids with you anyway. Look at yourself, you’re like a crackhead prostitute.”

San Francisco, 1976. Smoking marijuana in the street was in vogue, and transplanted females declared their independent, feminine, we-are-women voices. San Francisco was a sexual cookie jar with ready and willing beautiful women. Within five minutes of conversation, it was the norm that the f-bomb would flower as a noun, pronoun and adjective while offering a joint. Their modus operandi was “why wait!” Wining and dining was not necessary. You were their hook-up selection for the night. Why wait, indeed.

I left a $70,000-a-year job in Chicago, came to San Francisco without a job, let my hair grow out to a naturally curly afro and added a mustache. Quite a new look. I can best summarize my initial San Francisco beginnings as someone always offering me a drink, marijuana, hashish, taking their clothes off, or my looking for a parking place.

My Swedish friend and hair stylist, Anita, worked at I. Magnin and cut my hair every two months. My “worst date” had its origin at the I. Magnin boutique. Anita’s co-worker, an absolutely gorgeous, tall brunette from Ohio named Denise, shared an immediate attraction with me, leading to our one and only date.

Denise lived in the Pacific Heights area. After parking my car, I stepped in dog shit. Nice beginning.

Denise looked ravishing and greeted me with a welcoming kiss. Off to dinner at my favorite restaurant, Vintner’s on Union Street. We smoked a joint before going in. Normally, smoking a joint leads to enhanced appetites and a loosening of inhibitions with free-flowing conversation. Interspersed, I constantly visualized Denise naked in my bed. I couldn’t wait.

I was a “happy stoner,” the type whose gaps in conversation retention were quite frequent, accompanied by that dopey stoned look. Denise was the opposite. The joint didn’t affect her in the least as she talked on and on in all seriousness. My brain cells couldn’t keep up. Being so stoned led her to verbally dress me down multiple times during dinner.

“Peter, do you understand what I’m talking about?”

“Denise, your conversation is deep and wordy, and by the time you finish, I’ve only retained the last part of what you just said. I’m sorry.”

There was a deep, cold chill in the air after that. Conversation was at a standstill. Maybe she’d forget the dinner and share my thoughts of saving the date by having sex at my apartment.

Not a chance. She walked alone to her apartment without a “Good night.” It was my worst date. If Denise was writing her story, it would mirror mine—her worst date ever.

I’ve completely forgotten Denise’s looks, our dinner and conversation, but, for some reason, I’ve never forgotten that smell of dog shit on the sole of my shoe.