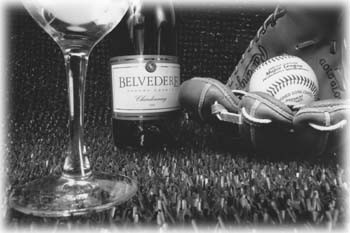 Take Me Out to the Ballgame: Belvedere 1995 Chardonnay has a taste of ash that’s perfect for that post-game BBQ.

Three winners in the cheap-chard league

LONG AGO, when tolerance and patience had not yet come into my life–this goes way, way back, to just before George Steinbrenner’s unlikely New York Yankees won the World Series last October and restored my faith in baseball–the idea of cheap chardonnay, like the split-finger fastball, seemed a perversion. Split-fingers ruin good pitching arms and elevate home-run totals to unnatural levels; cheap chard prostitutes an elegant grape. Why do this?

Money’s the reason, of course. Like ballplayers–or, more accurately, like ball-team owners–winemakers are seduced by the ching-ching of easy cash. God knows anyone can sell chardonnay these days. Selling water’s more difficult. Chardonnay outsells every other varietal by far, and the public’s taste for the pale gold seems to only be growing. Last March a new survey of restaurant wine sales showed chardonnay still occupying first place–just as it has for the last 10 years. Make no mistake: This is the Atlanta Braves of wine. It (and that accursed, racist “chop”) won’t ever go away.

But like the Braves, even value-priced chardonnay has its virtues. It sells big in restaurants because the varietal, in the right hands, is capable of producing flavorful, full-bodied wines without full-bodied price tags. As a food accompaniment it rarely disappoints, especially with seafood and poultry. True, some cheap chards are flavored with oak chips rather than aged in oak barrels (some, in fact, are “aged” in railroad tank cars), and most that are designated “California” contain poor-quality grapes from the overcooked vineyards of the Central Valley. But for eight or nine bucks you expect to go all the way?

Here are three cheap but sturdy chards from Sonoma County vintners and vineyards that left me damn impressed–and just a little more tolerant:

This chardonnay immediately reminds me of one of the great chardonnay values of all time, the “Clair de Lune” wines from Hacienda in Sonoma back when Steve Macrostie, who has since gone independent, was making Hacienda’s chards. Silvery white, nearly platinum in color, oaky and crisp on the tongue. With food, this Lyeth (like the old Haciendas) won’t clamor for your attention, which is both its charm and drawback: choose mildly sauced pastas or lightly dressed salads so the wine isn’t overwhelmed. Also, drink this wine cold; I noticed that its flavor declined as it warmed. Two and a half stars. $8.99 (on sale).

Tart and juicy. Drier than the Lyeth, which means it’ll go better with cheese and cheese sauces. Two swallows, though, provoked me into a real craving for fresh crab and warm sourdough. And though I usually prefer cabernet sauvignon with caesar salad, this wine’s dry enough to sing harmony with the dressing and dance with the anchovy. Heavy but short-lived oak was my first impression; golden summer hills in late afternoon light was my second. Two stars. $9.50.

Your kid’s team goes 0-15 for the season, and you’re in charge of the picnic. While the coach explains that good pitching always beats good hitting, pour him or her a glass of this succor-giving wine. As burger smoke rises sadly from the grill and the glass of chard glints like a World Series ring in the sun, perhaps the coach (and you) will be reminded that it is, after all, only a game, and of course there’s always next year. I smell outfield in the nose and taste the ash of Mark McGwire’s bat in the flavor, with just a touch of horsehide in both. This wine is so good that one glass will have you taking batting practice, two glasses and you’re talking contracts, and three glasses will make you think you’re Babe Ruth. Three stars. $9.49.