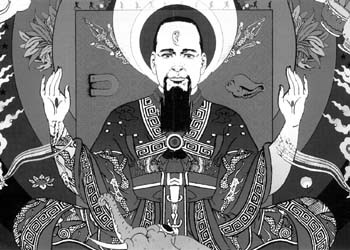 Bone master: Steve Turre is one of a new generation of jazz torch bearers.

That said, I shudder at the way slick, commercial pop jazz dominates the local music scene: David Sanborn and Keiko Matsui at the Luther Burbank Center. Richard Elliot, and Willie and Lobo at the Rodney Strong Jazz Concert Series. An utterly tepid lineup at the upcoming Russian River Jazz Festival that features ex-Starship guitarist-turned-New Age picker Craig Chaquico, sax player Dave Koz, and (gasp!) puppy-love vocalist Michael Franks in place of such past festival headliners as jazz legend Dizzy Gillespie, young jazz lion Roy Hargrove, and Latin percussionist Tito Puente. What a snore-a-thon. And KJZY–which is sponsoring the festival and includes unapologetic pop artists Loggins and Messina among its roster of “jazz” artists–now has taken to calling itself KJAZ, a slap in the face to every dedicated music fan that mourns the 1994 demise of the real KJAZ, the Alameda-based outlet that was the country’s last all-jazz FM station and one that never ever played smooth jazz.

If all this sounds like a lot of pissin’ and moanin’, consider that a recent Downbeat article chronicling the rise of smooth jazz found that heavy reliance on market testing at stations like KJZY has all but killed not only straight-ahead jazz artists, but even those mainstream fusion players who once defined contemporary jazz. Pat Metheny, Chick Corea, and even the Yellowjackets (never known as a cutting-edge band) seldom get air time because they’re viewed as too adventurous. And even the improvisation that is the heart and soul of the genre is dismissed at these stations (one major consultant refuses even to test any track that features a solo in excess of 10 seconds).

“I’m really at the point where I’d rather they just didn’t play any of our music than what they do,” Metheny complained to Downbeat, noting the practice of stations editing out his solos. “On the other hand, because we are in an era where there are so few opportunities to be heard, I can’t say, ‘Go away.’ We actually need every bit of exposure we can get. I’m not going to lie about it.

“It’s a matter of survival.”

And, for crying out loud, embrace the spirit of pure jazz. You can hear it in the plethora of recent Miles Davis-inspired works. For example, there’s film composer and trumpeter Mark Isham’s electrifying Miles Remembered: The Silent Way Project (Columbia), an homage to the late trumpet master’s landmark 1969 fusion album. Or the newly released Panthalassa: The Remixes (Columbia), the follow-up to Bill Laswell’s 1998 tribute in which he reconstructed Davis’ “In a Silent Way” and other fusion-era tracks. Or Cassandra Wilson’s spellbinding Traveling Miles (Blue Note), in which the genre’s best young female vocalist reinvents songs covered by Davis in genre-bending renditions that range from jazz to pop to rock. Or Lew Soloff’s superfine With a Song in My Heart (Milestone), the first solo album by this longtime session player who eerily channels Davis’ ballad style.

YOU CAN HEAR IT in the playful elegance of violinist Regina Carter’s alluring Rhythms of the Heart (Verve), with Carter leaving behind her lite-jazz past on this outing with pianist Kenny Barron and vocalist Cassandra Wilson. Or on trombonist Steve Turre’s Lotus Flower (Verve), with a super sextet that features Regina Carter and cellist Akua Dixon–the exchange between Turre and Dixon on Gordon Jenkin’s lament “Goodbye” alone is worth the price of admission.

You can hear it in the fiery free-jazz of saxophonist Dewey Redman, pianist Cecil Taylor, and drummer Elvin Jones on their acclaimed Momentum Space (Verve)–a trio of jazz masters at a career crescendo. Or the experimental explorations of Steve Coleman and Five Elements’ The Sonic Language of Myth (RCA Victor), a kinetic concept album that expands on the non-melodic, post-bop styles of Coleman’s M-Base collective. Or ex-Cream drummer Ginger Baker and the DJQ20’s Coward of the County (Atlantic), the startlingly fresh pairing with saxophonist James Carter that ranges from bop to lyrical ballads.

Or you can hear it on bassist Charlie Haden’s stunning The Montreal Tapes: Liberation Music Orchestra (Verve), the latest in a series of Montreal Jazz Festival concert recordings (this 1989 date includes trumpeter Tom Harrell, saxophonists Ernie Watts and Joe Lovano, pianist Geri Allen, and drummer Paul Motian). Or on Stan Getz and Chet Baker’s three-CD The Stockholm Concerts (Verve), a 1983 date chronicling two jazz giants at war on stage in some of their finest live material (Getz reportedly was so incensed at Baker’s heroin-induced stupor that he later had him thrown off the tour). Or Bill Evans’ Homecoming (Milestone), 75 minutes of inspired reflection from the pianist, captured in 1979 at his Southern Louisiana University alma mater. or you can hear it on Ella Fitzgerald in Budapest (Pablo), in which the late jazz singer scats and swings her way through jazz standards, show tunes, and pop hits.

It’s a safe bet that nobody else could make “Raindrops Keep Falling on My Head” sound this soulful–and it’s a sure cure for a chardonnay haze.