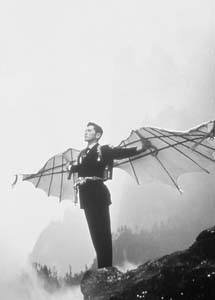 The Bird People of China takes flight at the Wine Country Film Festival, which begins showing films in Sonoma County on Aug. 5.

JUST A FEW moments ago, Steve Ashton appeared relatively calm. His manner was easygoing, his voice and gestures composed, as he led the way through a rambling old farmhouse–from which the annual Wine Country Film Festival is dreamed up and launched each year–and out to a peaceful spot by the side of a sun-drenched, frog-filled pond. As Ashton discusses the film festival in general terms, characterizing various aspects of this year’s event and comparing it all to festivals of the past, his manner remains composed, professional, reserved.

Then he starts talking about the movies–the specific films that have been selected for the 12th Wine Country Film Festival: films from Algeria, South Africa, Germany, the Czech Republic, Mexico, Canada, and Iran; films about love, passion, music, freedom, revolution, friendship, obsession, spicy shrimp, and the imminent demise of the world. As Ashton describes each new film, his voice rises in excitement, he grins, laughs, shouts, barely containing his enthusiasm for the remarkable visions crafted by each of these filmmakers from around the world.

As the founder and director of the homegrown extravaganza that takes place in Napa and Sonoma counties over a four-week period every summer, Ashton is doing something he loves, and it shows, in the way he talks about it and in the festival itself.

Sure, the Wine Country Film Festival may not be as trendy or well known as some its Northern California cousins–the increasingly glittery San Francisco and Mill Valley Film Festivals, for example. Still, over the course of its existence, the event has earned a unique reputation. Without question, the WCFF is one of the country’s more offbeat and eccentric celebrations of cinematic art. But most important–certainly this is the one element that has brought the festival heightened international awareness in recent years– the WCFF places a special emphasis on films with a social conscience, works that Ashton identifies as “films from commitment.”

No other mainstream festival of comparable size and scope has devoted as much energy and inventiveness to promoting and identifying those films and filmmakers that attempt–often daringly so–to make a difference, to alter people’s perceptions of one another, to bridge cultural gaps.

“To change the world,” Ashton affirms. “That’s certainly one of our hopes in presenting these films. Our program will contain the words ‘Film can give rise to our dreams and bring forth creative new possibilities in each of us. Through film, sometimes a person can be awakened.'”

“Any film, international or otherwise, that effectively bridges some kind of gap–that’s an important film,” he adds.

It was Ashton’s commitment to such films that brought him to the attention of the United Nations. This August, the United Nations will be celebrating the 50th anniversary of the Declaration of Human Rights, with a massive symposium to take place at the United Nations in Geneva, Switzerland. In concert with this event, a special film festival is being organized, and Ashton has been asked to select the movies that will be seen by delegates from all corners of the planet.

Many of the chosen films will be screened at this year’s WCFF. Among them is Polyas (meaning “jester”), which was filmed in South Africa. It was the first movie in the Afrikaans language to be submitted for an Academy Award. The story of a mute boy escaping a troubled home life who befriends a mysterious clown after joining a traveling circus, the film was produced by Anant Singh (Cry the Beloved Country, Sarafina), who will be on hand to receive the festival’s Distinguished Producer Award.

“The relationship between this white boy and this African jester in makeup,” Ashton enthuses, “is the central metaphor, the metaphor of accepting differences in other people. That is at the base of every conflict you can think of, be it racism, apartheid, nationalism, whatever. It’s all about learning to accept one another’s differences.”

Polyas will be screened outdoors at the Valley of the Moon theater in Jack London State Park. The showing of movies beneath the stars is one of the unconventional elements of this festival; numerous outdoor screenings will be held in Napa as well, at the Napa Valley Museum.

Other notable films the festival will be offering:

Dance with Me–the opening night film–is directed by Rhanda Haines (Children of a Lesser God, The Doctor) and stars Vanessa L. Williams, Chayanne, and Kris Kristofferson. Exploring the relationship between a bitter, unlucky-in-love ballroom dance champion (Williams) whose passion for dance is rekindled after meeting a young Cuban dancer (Chayanne), the film will be preceded by a Latin ballroom dance competition, open to the public.

The Tic Code, starring Gregory Hines and Polly Draper, is a jazz-laced story of a 12-year-old musical genius, his mentor (Hines), and the boy’s mother (Draper). The title has to do with an unspoken communication between those with the nervous disorder Tourette’s syndrome. Draper (who wrote the screenplay) and her jazz composer husband, Michael Wolff (who lives with Tourette’s himself), will make an appearance.

FELIX ADLON (son of Bagdad Cafe director Percy Adlon) will attend to screen Eat Your Heart Out, his new film about fame, friendship, and good cooking, preceded by a spicy shrimp cook-off between father and son. The remarkable Chiapas, a film about an Irish couple on a journey through Mexico, is one of the films Ashton has selected to take to Geneva, as is Honey and Ashes, a beautiful Algerian film about a trio of modern women dealing with the ingrained misogyny of North African culture. The Secret Life of Algernon stars Northern Exposure’s John Cullum (who will also be in attendance) as a hapless hermit upset by the intervention of a sexy and ruthless treasure hunter who is sure that a valuable artifact is buried somewhere on the old man’s property.

“As you can see, we’ve got a lot going on,” Ashton concludes, beginning to return to his formerly low-key demeanor. Suddenly, however, he’s reminded of another film. “It’s Zakir and His Friends, following Zakir Hussein, the great tabla player, literally around the world as he plays with every conceivable type of percussionist! That’ll be al fresco, and Zakir will perform before the film.”

Ashton, fired up by the mere thought of so much rare and eclectic cinema, is fully amped again.

“Wait till you see Divorce: A Contemporary Western,” he grins. “You won’t believe how good this movie is.”

The Wine Country Film Festival runs July 23 through Aug. 16. Films will be shown in Napa County until Aug. 2, and the festival comes to Sonoma County Aug. 5. For details, call the 935-3456.