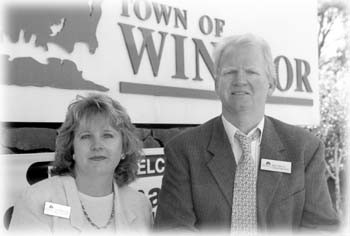 LIKE ANY DEVELOPING youngster, the town of Windsor, which celebrates its fifth birthday on July 1, is experiencing its fair share of growing pains. In this instance, it’s a childhood fraught with difficulties as Windsor’s future seems to hang in limbo, stuck between, on the one hand, hope for a growing tax base and financial security, and, on the other, fears about overpopulation, loss of small-town character, and dwindling farmland.

Now, like bickering parents, two factions–who each say they have the town’s best interests at heart–have launched into a public dispute about whether campaign promises by three town council members were kept or broken.

Organizers of Taxpayers Committee to Recall Fudge, Morehouse, and Salmon, in their official notices of intention, are accusing the three officials of a variety of misdeeds from “broken campaign promises to fiscal irresponsibility.”

“They promised a prosperous community with vitality and financial strength,” charges Taxpayers Committee spokesman Mark Patty. “They promised a quality of life, and they’re not delivering it.”

The committee also claims the council majority irresponsibly managed taxes, and that the three officials are bent on inundating Windsor with rampant high-density housing.

Fudge, Morehouse, and Salmon essentially have the same response to the accusations: they maintain they did fulfill campaign promises. “There are no broken promises or surprises in my pledge to oppose urban sprawl and preserve Windsor’s open space,” says Salmon, in his official response to the recall petition. “The recallist, plain and simple, is someone who cannot stand controls of any kind placed on Windsor’s growth.”

The committee must collect 2,100 signatures (there are some 9,000 registered voters in Windsor) within 120 days to force a recall election. Once signatures are turned in, the town clerk has 30 days to verify them. If sufficient signatures are confirmed, Patty says, the council will be forced to schedule a special election within four months.

When asked what they believe is driving the recall attempt, both Fudge and Morehouse say the timing is linked to the fact that Windsor is working on an urban-growth-boundary proposal that would curb annexation. “It’s an issue about trying to stop people from working on a UGB for Windsor,” says Fudge. “The other complaints don’t hold water.”

But Patty alleges the council majority pushed forward a UGB proposal that didn’t provide adequate review. “In 15 minutes they had a six-page manifesto by Greenbelt Alliance railroaded through,” he says.

Christa Shaw, North Bay field representative for Greenbelt Alliance, a non-profit land conservation organization, acknowledges that her group worked very closely with the UGB committee and helped them with the language, but says the organization didn’t write the proposal.

There will be public hearings on a UGB general plan amendment in the early fall.

According to Shaw, Windsor has a long history of gossip and rumor mongering. “People are very divided on political lines and there’s a lot of brouhaha,” she says. “Some folks in Windsor feel [the town] is too young to restrict its land budget–there’s a lot of money to be made in urban sprawl, and those interests are not pleased with the idea of an urban growth boundary.”

However, Patty says reports alleging that the Taxpayers Committee has backing from out-of-town developers are untrue. “This is a propaganda war and these are misleading half-truths, lies, and misstatements,” he comments. “Frankly, I believe people are panicked. We don’t need a lot of money for a high-profile campaign. We don’t need to buy the votes, we have the support already.”

Former Windsor Mayor Julie Adamson agrees that growth issues are not driving the recall. “It’s about financial irresponsibility and high-density housing,” she states. Adamson, a local real estate agent, says Windsor is being inundated with low-cost homes on very small lots. “They’re devastating property values. . . [and] they’re creating a high-density slum in the west side of Windsor,” she claims. “[The council majority] is misusing taxpayer money and driving us into bankruptcy.”

Adamson adds that since Windsor is a bedroom community, many residents don’t realize what is going on in their hometown. “My hope is that the town would stay small like when I was a kid, but it’s not that way anymore, so at least I want it to stay financially stable,” she concludes.

The three targeted officials–who all opposed a controversial Wal-Mart project on Shiloh Road approved in November by 51 percent of Windsor voters, a project that opponenets argued will harm small businesses–dismiss as scare tactics the high-density-housing scenario. “The former council approved the General Plan with some high-density housing. This council has added no high density,” explains Fudge, who took office in January.

She adds that claims of impending bankruptcy for the young town are unfounded. “We have a $2 million surplus, a reserve in our budget. We do need to increase our tax base and we’re working to bring other businesses into Windsor,” Fudge says. “We’re at a crucial point for our town in terms of development. We can go on down the same path with unplanned growth, a sea of houses, and no downtown, or we can plan growth, put boundaries around the city to concentrate on what’s inside, and become a town with an identity.”

However, members of the Taxpayers Committee say the three targeted council members are spending tax money and not taking advantage of savings. “It’s irresponsible management. They’re working toward an agenda that’s not in the best interests of the town or the taxpayers,” says Patty.

He adds that one of the committee’s major complaints is that the three-member council majority “cheated Windsor out of a $1.8 million golden egg” when it prevented the Shiloh Meadows project. Approved by the former council before the November elections, that plan would have extended town sewer pipes to a luxury golf course and several expensive residences that are outside the city limits. Taxpayers Committee members say the project would have saved Windsor $1.8 million in sewage treatment costs, according to engineering reports.

But the three targeted council members, who later nixed the project 3-2, say the so-called savings were blown out of proportion and did not take into account the cost to run the pipeline up the hill or the operating costs. In addition, they say, the project could have opened up the possibility for uncontrolled growth.

“We chose to provide reclaimed water to vineyards, to SRJC’s Shone Farm, to the Ya-Ka-Ama native plant nursery. We chose to support local industry, higher education, and native people over a completely private destination golf resort with million-dollar homes in the distant hills above and outside town,” Salmon responds.

Patty says the Taxpayers Committee started several months ago and that its membership has grown from a “ground swell of dissatisfied citizens who’d leave town council meetings shaking their heads, not believing what they’d heard.”