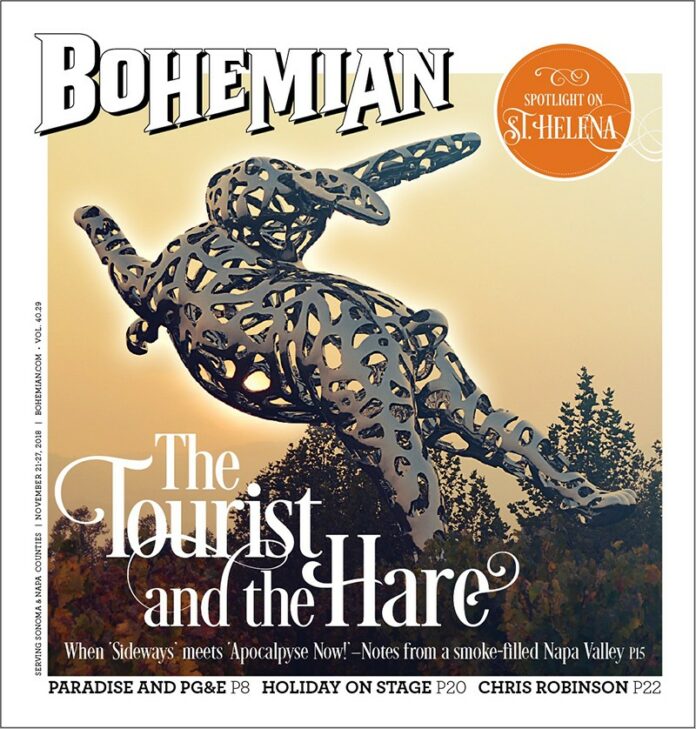 Window on a World

A man and his dog, and a day in the life of not-so-sleepy St. Helena

I‌ had a friend once whose sister really thought that “window-shopping” was when you went shopping for windows. Window-shopping can, of course, mean you’re shopping for windows, but usually not. This is the sort of confusion that can ensue when your retail norm is dominated by enclosed suburban malls instead of street-fronting downtowns like that of the rugged and rich town of St. Helena.

I’m here today window-shopping and checking the commercial hub along Main Street, which centers a town whose boundaries are roughly the massive Beringer Vineyards estate and the Culinary Institute of America at Greystone outpost to the north—and the big shining metal rabbit at Hall Wines to the south, where St. Helena gives way to Rutherford and the epic sprawl of the greater Napa Valley.

Betwixt and between those icons is a bustling and pretty luxe-oriented downtown where all I can pretty much afford to do is wander around with my dog, checking stuff out for another day and appreciating the holiday vibe that’s taken over the town.

I note a stuffed peacock in one window and hover a minute at Steves Housewares, in business since 1878 and going strong with the full array of home product.

The president is in the state this week, and I wonder aloud: Do they sell rakes here? I need a rake. The president says all I need is a rake, and all this fire business will be a thing of the past. Just rake up that forest, like they do in Finland. And don’t you know it but Steve’s carries rakes! The store also got a recent shout-out from Gwyneth Paltrow’s Goop, for its kitchen products.

Also worth a drop-in is the next-door New West Knifeworks, an emporium of high-end cutlery. I’m mesmerized by shiny things, and the knives at home are getting a little old. “If you’re wondering what to get me for Christmas,” I tell the dog, “that Iron High Polish Damascus six-piece knife set is exactly what I need, and at $4,274, we’ll both be eating dog food for much of 2019.”

The dog is always up for checking out some new sniff territory. We’re led to Fideaux, where a turkey treat is met with great pleasure, and the dog politely noses tubs filled with snacks. We have to leave Fideaux at once, given my propensity for blowing paycheck after paycheck on dog treats and toys. Another time, dog.

I was kind of taken aback at the sheer volume of wine-industrial machinery that whips through town along Main Street; it gives away the game that we’re in an industrial zone here, and the industry is grape. I counted numerous potable water tanks and big wooden wine casks and backhoes rumbling up and down Main Street—where one of the more interesting outdoor motorized sights are the airplane-mobiles out in front of the Harley Davidson rent-a-bike place, Neiman’s Motorcycle Rentals. There’s an old VW Bug that’s painted with a Germanic Iron Cross and which is powered by an old airplane engine.

Hands down, the most alluring of all windows along Main Street are the two storefronts of Ottoman Art; one shop sells lovely rugs, the other is a brightly lit shop with all sorts of lamps and Ottomanian treasures. I can barely afford to look at the rugs, but the brightly lit façade next door is now surrounded with shopping outposts tricked in the holiday guise. It’s all coming together now.

We came into town via the wistful St. Helena Road, from the west, an enjoyable drive characterized by numerous vineyards, lots of redwoods, a few hair-pin turns and a smattering of ‘Wine Sucks’ signs. Departing St. Helena in the late afternoon, I opted to take the southern route home, and left Main Street behind. Before long, we came upon that big metal rabbit (Dean & DeLuca is located here too).

I stopped the car and got out to marvel at the rabbit. As the sun set over the rabbit and the hills to the west, the sky was the color of burnt orange; the smoke has settled into the Valley from the Camp fire, and it’s quite nasty.

It’s Apocalypse Now! meets Sideways, with elements of The Road thrown in for good measure—not to mention Watership Down, in honor of the rabbit, and water.

As we make our way home, I recite some of the history of St. Helena to the dog, who is indifferent to my interest in this star-studded redoubt of literary giants. The food writer M. F .K. Fisher lived in town for about 15 years before moving to Glen Ellen—but what does he care. I’ve got some other numbers and factoids too. According to the 2010 census count, there are about 5,000 residents of St. Helena, a town with a low crime rate overall. But according to police data, there was a big spike in auto thefts in 2016, when 14 vehicles were stolen. “This is why I didn’t leave you in the car,” I tell the dog, who is ungrateful.

It’s also hard to sniff past the fact that the post-crush Napa Valley smells like sour grapes—the smell tickles the nostrils as it mingles with the smoke, and the dog’s had enough of this; he’s buried his head and over-sensitive schnoz in a blanket for the ride home.

“No, but look,” I say to him, “there’s a lot of interesting politics here, too.” St. Helena was one of the Napa towns that battled over last year’s Measure C, which sought to limit vineyard growth in the hills and failed at the hand of the Big Grape overlords, who are nice people, but still. “This part of the world is ground zero for the argument about ‘peak wine’—don’t you get it, dog?”

One Measure C supporter was former St. Helena council member Geoff Ellsworth, who ran for mayor this year and won as part of a county-wide slate of progressive candidates motivated by the defeat of Measure C.

Outgoing Mayor Alan Galbraith only conceded defeat this week. Earlier in our St. Helena day we were walking along the tracks of the Napa Valley Wine Train that cuts through town, and spotted a lonesome-looking “Ellsworth for Mayor” sign placed along the tracks.

At the sight of the sign, the dog began the ritualistic lifting of leg. “Hey, cut that out! This is a classy town, dog!”