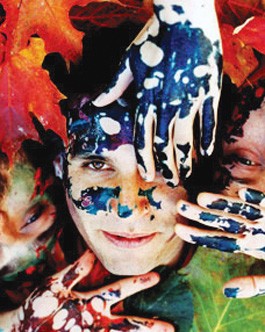 ALL PAINTED UP: Thanks to everyone who entered. Y’all rule.

Winner: Emily Hanson & Friends, ‘Who Could Win a Rabbit’

The second song from Animal Collective’s 2004 release Sung Tongs is a rollicking jaunt, one to be sung at the top of the lungs. Emily Hanson and friends do a bang-up job at recreating this childlike feeling. Like a couple of teenage girls cracking themselves up while their mom’s away, the recording starts and ends with giggling, followed by instrumentation of an empty coke bottle, Starburst candies in an orange juice canister, scissors on a Mason jar and ukulele. Amateur, deskilled, “experimental,” primitive—they capture the energy of Animal Collective through their own filter.

More than one person in the newsroom felt a lump rise in the throat at Ahn’s version of this seven-minute song from Strawberry Jam. Ahn’s voice evokes Joanna Newsom and Kate Bush, and when she sings “I feel ugly, I feel my pores,” it’ll make the toughest man cry. Ahn takes the meaning and tone of the original and creates something altogether new. The moment we heard this we knew something truly special had arrived.

Altamirano turns the No. 1 hit from the band’s 2009 album Merriweather Post Pavilion into a fun, scrappy piece punctuated by echoey guitar and yowling vocals.

A venture into zoned out repetition, this song from 2005’s Feels features a child humming quietly in the background while randomly shaking what sound like jingle bells as a quavery voice sings a rush of words. Near the end, the kid starts coughing and talking as the words repeat: “Gotta give a little, gotta get a little bit.”

The original version of “Kids on Holiday” is like a lost track off a Syd Barrett album, and Keller does nice work of recreating the psychedelic, droning repetition of this Sung Tongs song. Put on some headphones, lie down on the grass, stare at the sun, listen to Keller’s airy vocals and go with it.

This cover from Sung Tongs starts out with moans, quacks and kitten noises. An accordion that sounds like it’s being played by a tiny spastic clown is backed by what sound like buckets being tugged to the bottom of a lake. The sickly cat sounds rise again, and the feeling of being lost at sea lingers. If any disturbed circuses seek a back-up band, they might want to give this crew a call.