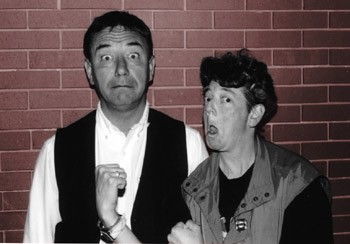 Will and Debi Durst

The King and Queen of Comedy: Will and Debi Durst mug for the camera.

Storm of the century or not, the Dursts will definitely be telling a few jokes in Petaluma this weekend, when they bring the 10th annual Big Fat Year-End Kiss-Off Comedy Show to the Mystic Theatre. In what has become a boisterous Bay Area tradition, Will Durst will be joined by a team of notorious local comedians including Johnny Steele and Steven Kravitz, plus the longtime improv team of Michael Bossier and Debi Durst.

Will Durst, of course, is the nationally renowned political satirist whose curmudgeonly views of current events have made him one of the most popular standup comics in America. Aside from his energetic touring schedule, he writes a daily Internet column, is a frequent commentator on NPR and CNN, is the host and creator of the Emmy-winning PBS series Livelyhood, and has appeared on nearly every major television comedy show.

Perhaps less well known, Debi Durst is an established Bay Area comedian who’s opened for everyone from George Carlin to, well, Will Durst. She’s also made vocal contributions to several movies, including Tim Burton’s Nightmare before Christmas, for which she provided the voice of the little corpse boy. Will and Debi Durst have been married for over 20 years.

The annual year-end show, which Durst admits was developed as an alternative to performing at rowdy comedy clubs at New Year’s, will do its thing at seven different Bay Area theaters between now and the end of the year. The show is extremely popular and tends to sell out.

“We’ll do skits and sketches and jokes,” describes Will. “We’ll scoff and mock and taunt–but in good taste.”

If the last few years are any indication, good taste shouldn’t necessarily be counted on. Johnny Steele–known to many as the former co-host of The Show on Bay TV and as the one-time morning DJ on LIVE-105–can be expected to wear his hat and use the word “mook” at least once while ranting about the state of the world in aggressively funny ways. Debi Durst and Michael Bossier will, at some point, offer spontaneous movie reviews, and Steven Kravitz will scare people.

It’s possible that someone will attempt to sing.

“Who really knows?” says Debi. “The show is always a bit unpredictable. We’ve been working together for 10 years now, but we never know what’s going to happen.”

“Are we doing the quiz show this year?” Will asks.

“Of course we’re doing the quiz show!” Debi replies, explaining, “It’s kind of a ‘To Tell the Truth’ thing, where we get a couple of people up out of the audience, and then we have these trivial questions, and it’s just really weird and interactive.”

The main order of business, of course, will be a vigorous skewering of the year 2002 and all it stood for. Based on the events of the last 12 months, the comics should have plenty of material to work with.

“2002 has provided an unusual number of opportunities for humor,” says Will. “There’s Trent Lott and George Bush and Henry Kissinger–lots of people to make fun of. Did you know that we now have England accusing the U.S. of imperialism? It’s true. South Africa is lecturing us on human rights. The justice minister of Germany recently called George Bush a Nazi. We’ve been more or less labeled a Nazi country–by Germany! I don’t know about you, but I don’t think that’s a good sign!”

“Everything is topsy-turvy,” agrees Debi. “Or is it turvy-topsy? Topsy or turvy? I don’t really care–but I’ll take a hot topsy, please.”

As a warm-up exercise, Will and Debi Durst agree to offer their views on some underreported news events of 2002, all gleaned from Internet sources and the odd official newsletter. Informed that the National Science Foundation has announced that tiger moths use “sonic defense” to trick bats, Will exclaims, “Really? Wow! My whole understanding of the bat-tiger-moth relationship has been irrevocably altered now.”

“I know something about this,” interjects Debi. “I heard that the military is looking into the sonar part of the tiger moth–so we may end up having nuclear subs with sonar systems made up of little tiger moths. I’ve heard that.”

“Uh, no honey,” interrupts Will, kindly. “I think what you heard was that the military will be trying to duplicate the moth’s sonar abilities with new technologies that–“

“Stop it up!” she cuts him off. Actually, this mainly makes him laugh.

The Dursts make each other laugh a lot.

“You see,” Debi is still explaining, “they’ll put these moths on the subs, see? And it’s a nuclear sub, see? So the moth will get really big, see? And the Navy will have these great big moths with captain’s wings on them.”

“Oh. Yeah. Right,” Will responds slowly. “And the only way to defeat it is with the giant turtle, right?”

Moving on. According to an article in the United Nations newsletter, Oct. 11 marked the 10th straight year of peace in Mozambique.

“See, it’s Mozambique,” says Debi. “It takes so long to say the name of the country, there isn’t any time to fight. Besides, what other country has a z and a qu in its name?”

“Good point,” says Will. “So Mozambique, if nothing else, is a great Scrabble word.”

The Dursts are especially amused to learn that Oregon State University recently published a study questioning the “moral underpinnings” of a strictly vegetarian diet. According to OSU researchers, millions of small animals die each year to provide the agricultural crop products used in vegan diets. The study claims that far fewer animals would die overall if vegans started eating grazing animals such as sheep and cattle.

“Why wasn’t this more widely reported?” demands Debi. “I’ll bet it’s because it was Oregon State University. There are a lot of vegans up there in Oregon.”

“That’s right,” Will agrees. “There’s an obvious conspiracy to keep this information from getting out.”

“The news will probably be uncovered that vegans have been eating vegetables that did not die of natural causes,” suggests Debi. “Maybe we’ll learn that those weren’t free-range cabbages after all.”

This proves too much for Debi, who takes her turn erupting in laughter, which only makes Will start laughing again, and the conversation deteriorates into a near hysterical volley of bad vegetable puns.

It’s too hard to make out the words through all of that laughter.

Will and Debi Durst’s Big Fat Year-End Kiss-Off Comedy Show is Sunday, Dec. 29, at 8pm at the Mystic Theatre in Petaluma. $17. Tickets are available at the box office or through www.tickets.com.