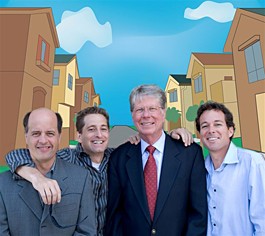 You got your Kings, your Queens, your Redneck and your Blue Collar comedy tours, so why not the middle-class white guys from the suburbs, too? After all, the only ones laughing at them with any regularity are their wives and kids; clearly the audience could be wider than just that seated at the dinner table.

Enter the Suburban Comedy Tour. Featuring four decades of college-educated white guys—Andrew Norelli (28), Dave Burleigh (36), Mickey Joseph (46) and Ken Koskella (over 50)—this troupe focus their comedic foibles on the backyard, the bedroom, the kitchen table, the neighbor’s house, the soccer field and other places frequented by the suburban family.

Koskella, a former CEO who retired early but remains exactly the kind of executive who will simply call a journalist up if he thinks that an interview is warranted, has wanted to do comedy since he was a kid. Now that he can afford such, Koskella hired someone to teach him how to write sketches and perform standup. He soon found that audiences in theaters, as opposed to drunkards in comedy clubs, reacted favorably to his schtick about spending his kids’ inheritance and dealing with the cop who lives next door. Reading the Wall Street Journal one day, he came upon an item stating that today’s suburbans like to stay in the suburbs when they have fun, and not venture to the urban wilds. Why not, he wondered, give them exactly that?

Almost two years later, the Suburban Comedy Tour swings through what should be its spiritual home, Rohnert Park, on Saturday, Oct. 13. “We don’t particularly set aside the show for just suburban humor,” Koskella assures warmly. “It’s really about ourselves.”