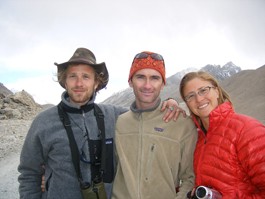 San Francisco is scheduled to be the only North American city hosting the Olympic torch as it winds its way to China next April. Several local residents are already making plans for the torch, but their energies aren’t aimed at cheering as this symbol of international unity is carried through the city. They hope to convince the Bay Area that the 2008 Olympic torch should not be welcome here—or anywhere.

Most particularly, they don’t want it in the occupied territory of Tibet, where China intends to run its Olympic flame up and down Mount Everest. China’s hosting of the 2008 Olympics, they argue, is political propaganda fodder, and cheering as the Beijing torch passes will put a worldwide seal of approval on the status quo, including China’s 50-year occupation of Tibet.

Service, 32, is one of three Sausalito residents who recently put their beliefs on the line in carefully orchestrated protests on Mount Everest and China’s Great Wall. She and Laurel Sutherlin, 30, helped stage an April protest at the Mount Everest base camp where the Chinese Olympic team was practicing for a torch run up the mountain. And in August their colleague Duane Martinez, 26, was videographer for a group raising a 450-square-foot banner reading “One World, One Dream, Free Tibet 2008” on the Great Wall of China.

Tibetan-independence advocates argue that in attempting to use the Olympics to legitimize their country and its tactics in the eyes of the world, Chinese leaders have created an opening for incredibly effective nonviolent protest.

“Right now the Bay Area has an enormous opportunity that we really need to leverage,” Service explains.

She adds, “If the torch comes through [San Francisco], it’s going to be a smear on the city.”

The first jail where Service and Sutherlin were detained was like something “out of a poorly funded Hollywood movie,” Sutherlin says. “It was a cement cell with yak meat hanging from the ceiling and bars on the windows.” Their April 25 nonviolent protest had gone smoothly, which was surprising given all the obstacles.

“There was a lot of cloak-and-dagger shenanigans and high-stakes maneuvering, and a lot of serious effort put into not endangering any Tibetans along the way,” Service says.

Although they’re both gay, Service and Sutherlin posed as an engaged couple eloping to Mount Everest with a high-tech satellite broadcast system so they could share their “big moment” live with the folks back home.

That’s just one of the ways they got the necessary technology into Tibet. But initially most of the cold-sensitive gear didn’t work in the high altitude. So they erected a bright yellow tent (illegally, but nobody stopped them) at the base of Mount Everest. They stayed up all night shoveling yak dung into a fire, heating water and filling hot water bottles which they then snuggled into sleeping bags cradling their equipment. The next morning they walked an hour and a half uphill at 17,000 feet, lugging everything to the protest site.

“It was completely mystical, with the sun rising over Everest and the chorus of bells of the yaks waking up,” Sutherlin recalls. “It was absolutely sublime.”

They unrolled their “One World, One Dream, Free Tibet 2008” banner. Team member Tenzin Dorjee lit a torch and sang the Tibetan national anthem—a brave act in a region where it’s legally considered treason just to say the words “Free Tibet.” The group marched their banner into the Chinese Olympic team’s camp, where they were arrested. They waited to see what would happen next.

“We knew that the Beijing higher-ups wouldn’t want to have injured Americans on hand to create an international incident, but we weren’t sure the field commandos would have gotten that memo in rural Tibet,” Sutherlin explains with a rueful laugh. He adds thoughtfully, “It was a pretty terrifying experience.”

They were detained 55 hours. For the first 30 hours, they weren’t allowed to eat, drink or sleep. And even when they were allowed to sleep, they were frequently shaken awake, keeping them sleep-deprived.

Each was hustled into a separate SUV for the nine-hour drive from Everest to the town of Shigatze, with several stops at local police compounds where the captives were made to walk around in the dark before getting into another vehicle and speeding off again. They only caught glimpses of each other, and were never sure if one of them might have been driven off in a direction from the rest.

Not having been fed for hours, they were led into a huge banquet hall with large round tables, red velvet chairs and a chandelier overhead. Each team member sat at a separate table, surrounded by guards and officials. When they started eating, the room filled with cameramen capturing how well they were being treated. The nightmarish experience ended with a nine-hour, 15-car caravan to the border, sirens blaring all along the way.

“They made a massive pomp and circumstance out of expelling us from the country. It was surreal,” Service says.

It’s likely, she adds, that Chinese officials believe the protesters were treated well.

“The tactics we experienced are just a mild version of what is used throughout Tibet on a regular basis. To them, their treatment of us was gentle, but it actually meets the legal definition of torture. This is the kind of ruthlessness we are talking about in Tibet.”

The one image that videographer Duane Martinez can’t get out of his mind is the windowless brown conference room with buzzing fluorescent lights where his six-member protest team was confined for most of their 36-hour detention after flagging the Great Wall this August.

Occasionally a guard would point at one of them and grunt, “You, now,” and that person went away to be interrogated.

Martinez also remembers the moment on Aug. 8 when the group unfurled their banner on the Great Wall, at a site near the town of Huirao. “I thought my heart was going to fly out of my chest when we started going. It’s a nervousness and an excitement. A lot of that adrenaline was knowing that a live feed was going out. I kept telling myself to think about the ripples that were spreading.”

Security guards jailed the protesters in the rustic cell at the base of the Great Wall. From there they were taken to a nearby town, then to a police compound in Beijing, where they spent about 20 hours. The team members—three from the United States, two from Canada and one from the United Kingdom—refused to answer any questions, asking instead to speak to a representative from their embassy. They never did meet any embassy officials, but after 36 hours of sleep deprivation, interrogation and disorientation, the protesters were told they were being sentenced to five days in jail and ordered to sign Chinese papers. They refused, and all were put on a plane to Hong Kong.

Now back in Sausalito, Martinez, Service and Sutherlin are working to ensure that the Beijing torch won’t receive an unquestioning positive reception in the Bay Area. Sutherlin notes, “This is really a make-or-break moment for the Tibetan people and the Tibetan culture.”

Singer-songwriter Peter Rowan performs at a fundraiser for Students for a Free Tibet, including an auction of work by local artists on Sunday, Oct. 21, in a private home in Mill Valley; $25-$300. For details, go to www.studentsforafreetibet.org/peterrowanbenefit.