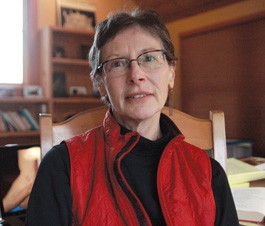 Where He’s Calling From

There’s blood on the back of the book. Old, browned, dried blood that once seeped into the pages until it coagulated. There’s hair, too, gummed up in the splotchy stain. Sitting in her home studio overlooking the Pacific Ocean on the outskirts of Jenner, Carol Sklenicka says that mint copies of this book, Raymond Carver’s first published work, Near Klamath, are worth several thousand dollars. This one’s been ruined by . . . by what?

The answer is a Raymond Carver story unto itself. Sklenicka, author of the recently published Raymond Carver: A Writer’s Life ($35; Scribner), the first full-length, exhaustive biography of the notoriously rough-and-tumble writer, explains that the book belonged to Curt Johnson, Carver’s first publisher, and indeed, his name is written on the inside flap adjacent to an inscription by Carver’s first wife: “It’s all been worth it, and I’m excited. (This is ridiculous!) We love you, Maryann.”

Johnson was a notorious binge drinker, and one night he had a seizure and collapsed on the floor. He cracked his head open near a pile of books. That’s his blood. And hair. Stuck to Carver’s first book. “So that’s pretty creepy,” Sklenicka says calmly. “And sad.”

Raymond Carver: A Writer’s Life is full of such sadness, as any aficionado of the masterful short-story writer might ascertain. It’s also received a glowing front-page review by Stephen King in the New York Times Book Review, which named it one of the 10 best books of 2009 for its connective insight between Carver’s life and work. Shot to prominence in the 1980s for his haunting stories of lower-class characters and domestic despair, Carver, as Sklenicka’s book expertly and constantly illuminates, often scrabbled through the same desperation he told on the page.

“There’s no doubt his behavior was bad,” says Sklenicka, a compact woman in a red vest and jeans, seated in her book-lined office with a large black dog at her feet. “I blame the disease of alcoholism more than I blame him as an individual. He hit bottom six times, I think, or more. They always say you have to hit bottom before you can recover. It didn’t work for him. He just kept hitting bottom over and over—blackouts, he was in trouble with the law, he was violent to Maryann, he was a terrible father, couldn’t keep a job.”

For Sklenicka, who grew up among working-class people on California’s Central Coast and says discovering Carver’s writing in 1976 “was unlike anything else I thought I’d read before,” uncovering sordid details about Carver’s life involved more than 10 years of criss-crossing the country, from Syracuse, N.Y., to Yakima, Wash. El Paso, Iowa City, Sacramento, Arcata—Sklenicka visited them all, the many places Carver moved to in a recurring effort to start his life anew.

In her study sit boxes upon boxes of Carver’s correspondence, on loan from the library collection at Ohio State University; she has cassettes full of interviews conducted, old newspapers with references to Carver’s stories. “This was all pre-Google, by the way,” Sklenicka says wryly, mentioning yearbooks, old places of employment and city directories as treasure maps for Carver’s scattered acquaintances.

“At every stage in his life—and his life, to me, had so many distinct stages, partially because he kept moving—there would be a whole group of people,” she says. “He had so many friends who really loved him. And I don’t think it’s just because he’s famous.”

Nearly every Carver fan wonders, when reading his stories, how much of the discord is autobiographical. Sklenicka constantly sews the two together, and this is one of the book’s most rewarding qualities. With its characters Ralph and Marian resembling Raymond and Maryann, “Will You Please Be Quiet, Please?” covers Carver’s trip to Mexico, his time spent in Chico, his unfounded distrust of Maryann. “The Night the Mill Boss Died,” one of Carver’s early stories, was inspired by Carver witnessing a man collapsing from a heart attack at the Simpson Plywood Mill in Eureka, where he briefly worked. Even the cat in “Neighbors,” named Kitty, was based on Carver’s landlord’s cat, who scratched up his couch.

One story haunted Sklenicka to distraction: “So Much Water So Close to Home,” in which a group of fishermen find the body of a young girl in the river and do nothing about it for the duration of their entire camping trip. “This is just how obsessed I was with research,” Sklenicka explains. “Carver said he read it in a Memorial Day weekend newspaper story in the early ’70s. I went through the Chronicle for every Memorial Day weekend, and I couldn’t find it.” Prominent in Short Cuts, Robert Altman’s 1993 film based on Carver’s stories, “So Much Water So Close to Home” was later adapted for Jindabyne, a 2006 film starring Gabriel Byrne and Laura Linney.

Carver’s widespread fame came ultimately from his association with Knopf editor Gordon Lish, painted in Sklenicka’s book as a manic, power-obsessive man who overstepped his bounds, particularly with his ravaging of Carver’s second book, What We Talk About When We Talk About Love. Lish severely altered Carver’s voice and changed his endings or killed them entirely, as in the iconic “A Small, Good Thing,” the story of a baker who makes angry calls to a couple whose son, unbeknownst to him, has just been struck by a car.

In Lish’s edit, titled “The Bath,” the story ends with the baker’s antagonizing demand for the couple to pick up the cake they’d ordered. But in Carver’s original version, the baker reconciles with the grieving couple, offers them pastries and talks with them until dawn in his kitchen. This exemplifies Carver’s empathy for his characters, whereas Lish, Sklenicka says, “had disdain for Carver’s characters. That’s pretty much what he told me. He said he thought they were ‘below the salt.'”

The literary world had long bandied opinions on whether Lish’s imposition on Carver was a small, good thing or a disastrous wreck. Sklenicka turns somber when she talks about the disappearance over the years of Lish’s first round of edits for What We Talk About before the scalpel-like second edit. “I think there’s a wonderful book there,” she rues, “that got trashed in the second round of editing.”

If Lish emerges as a devil in Sklenicka’s book, there’s an angel as well: Maryann Carver, Raymond’s first wife, who believed in and supported his literary ambitions by working and raising kids for 25 years while Carver drank everything in sight, wrote brilliant stories and once, in 1975, nearly killed her by smashing a wine bottle against her head. Sklenicka’s treatment of their tumultuous marriage remains in thrall to Carver’s genius while clearly outlaying his brutish, selfish nature. (A letter to the editor from Maryann herself, in fact, praised Stephen King’s New York Times review for piecing together the facts of her marriage and defending her patient influence on Carver.)

Carver did eventually quit drinking in 1977, in McKinleyville, Calif., two days after his publisher sent him a $4,000 advance for his long-talked-about novel. Sklenicka, who studied alcoholism in depth while writing about its debilitating effects on Carver, thinks this is a crucial point in the career of a writer whose characters were so often desperate. Carver’s ability to finally quit drinking came from having enough money to live on for the summer, and having something to do. “He had to hit bottom, there’s no doubt about it,” she says, “but he also had to have, I’d say, hope.”

After two years of sobriety, Carver met poet Tess Gallagher and further cemented his status in the literary world. In 1988, Carver was diagnosed with terminal lung cancer. Two weeks later, he married Gallagher in Reno; six weeks after that, he died. But his stories live on, and, thanks to Sklenicka’s astounding biography, his own story lives on—for better or for worse.

“Finding out about the man didn’t change my admiration for the work. It just showed me how hard he had to struggle to stay alive to do that work,” she says. “It’s almost like people want to completely dismiss his work when they find out about his jerky behavior. That seems naïve to me about the human condition. It seems to me there’s this false moralism around, and people, they’re just not going to admire someone if they’re not perfect. I don’t know, I think we’d lose a lot of good music and art and writing if we stuck by that.”