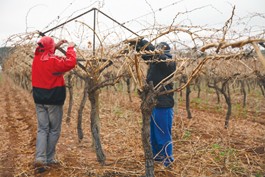 Where Are the Unions?

MAY DAY: As May Day approaches, we assess the role of immigrants in the North Bay, both in this story and the cover feature.

It’s hard to make out faces while passing them on the highway. They may even seem mere dots, spread out against distant rolling expanses of immaculately groomed wine country vineyards. Others mill about in early-morning clusters, on sidewalks and parking lots in places like Boyes Hot Springs, Napa and Graton, hoping day work is offered. Most have traveled north from distant southern climes, providing the skilled workforce that ensures North Bay’s vineyards flourish. They are essential to the continuing production of America’s most prestigious and costly wines. But in these dire financial times, just how are Napa and Sonoma’s vineyard workers weathering the economic storm?

March 2009 figures place Sonoma County joblessness at 9.1 percent, the highest rate of unemployment since 1983. How that rate affects vineyard workers is difficult to gauge. Many are undocumented or travel here each day from surrounding counties to seek work. That now is the toughest job environment in the past 26 years would seem to be bad news, particularly for marginally and underemployed workers.

Yet according to Nick Frey, president of the Sonoma Winegrape Commission, things haven’t changed much for the vineyard worker. “Actually, the workload is pretty much there,” Frey says. He points to other industries, such as construction, which have seen dramatic declines. Frey attributes enhanced numbers seeking vineyard work to job losses in these other sectors.

Whether it be an influx of laid-off workers from other industries, cutbacks by vineyard owners and management or American trade policies like NAFTA that are responsible for swelling the available immigrant labor pool, a survey of regional vineyard worker and day-labor organizations suggests growing numbers of people are seeking vineyard work, with fewer and fewer actually finding it.

Just two years ago, the Wine Spectator Magazine published a story asking “Where Have All the Workers Gone?” a question that Peter Martin, professor of agriculture and resource economics at UC Davis, sees as moot. Martin’s research indicates that the much ballyhooed field-labor shortages were and are simply a mirage. In a report published last year, Martin points to wages, which he would expect to see rise dramatically were there a labor shortage. He compares the average farmworker wage of $9.06 an hour with the substantially higher average of $16.76 for non-farm labor, noting that real wages for farmworkers increased only 0.5 percent between 2000 and 2006.

While all farm labor is physically demanding, vineyard labor requires a skill set well beyond what many imagine when conjuring up images of, say, conventional stoop labor. A good vineyard worker not only requires extensive training, but, like other professional fields, there are those who bring talent to the fields and those who do not.

Gregory Billikopf is a labor management farm adviser for UC Davis, and the author of Labor Management in Agriculture: Cultivating Personnel Productivity. Billikopf says, “All my research has demonstrated that out of, say, 15 to 20 employees, the best will perform four to eight times better than the poorest, on the average.” Billikopf, who was raised in a grape-growing family in Chile, is an ardent believer in piecework.

“If your best worker produces four to eight times as much as the poorest, and the poorest worker is making $6, isn’t that $45 fair? I’ve heard story after story of workers being punished for being too productive,” Billikopf says. “Adding tasks, lowering wages—there are 101 ways to punish workers who do well.”

Billikopf notes that the very finest farmworkers are likely to be found in the vineyards since, unlike most other forms of agriculture, vineyards require near year-round attention. But he also emphasizes the high degree of skill vineyard work demands. “With a regular tree, you prune it back so it doesn’t work so hard. In grapevines, it’s an art,” Billikopf says. “It’s such a quality thing, to prune a grapevine. A thinking job. Among the highest skilled jobs in agriculture.”

Which leads to the question: If vineyard work is so demanding and difficult, do vineyard workers actually receive fair recompense for their efforts?

According to the Living Wage Coalition of Sonoma County’s 2008 figures, a single person with a full-time job needed to make $15 an hour, plus benefits, in order to be considered self-sufficient in the county last year. Since vineyard labor requires such a high degree of training, aptitude and concentration, matched with constant physical exertion, is it fair to assume that vineyard workers would be paid somewhat more than simply what’s required to financially squeak by?

Frey says, “Sonoma County has probably some of the highest wages in the ag industry in California because we have premium-quality products and there’s a real move to provide career opportunities for our employees.”

Locally produced wine is certainly premium-quality, and very profitable, too. According to North Bay Biz magazine’s “2009 Top 500 North Bay Companies,” last year’s combined revenues for the three top local wine firms was $1.868 billion, every penny of which was generated from their operations located here. With 500-plus wineries calling Napa and Sonoma counties home, and over 1,800 separate grape growers in Sonoma County alone, it’s no stretch to say that there’s still a lot of money coming in from grapes and wine.

So does the vineyard worker fairly share in these rewards? If a full-time employee need make $15 an hour simply to manage self-sufficiency, then just what do these “high wages” amount to?

“I imagine there are some people paying minimum wage or close to it,” Frey says, “but here our general labor average is $10.13 [per hour] if they’re a farm labor contractor employee. If they’re working for somebody, it’s $9.32. That was the average in Sonoma County.”

Which means that hardworking skilled vineyard professionals are, on average, making approximately two-thirds of what is required simply to squeeze by here in the North Bay—but only if they consistently work a 40-hour week and receive full benefits.

North Bay’s vineyard history has, of course, been a patchwork of difficult ethnic transformations ever since native Miwoks first planted and tended vineyards of mission grapes for Sonoma’s Franciscan padres in the early 1800s. Successive waves of immigrants and migrants, including Chinese, Japanese, Portuguese, Okies, Filipinos and Italians preceded the Mexican worker in vineyards here, and all have encountered deprivations.

The issue of unionization, and the current acrimonious debate in Washington over the Employee Free Choice Act, also resonates here. Asked why, in his opinion, there have been few recent efforts to organize local vineyard workers in unions, Frey says, “I think that the union, just like this organization—we have to provide services to our growers that are valued.”

Frey’s implication seems to be that neither the United Farm Workers (UFW) nor any other unions provide services as valuable to vineyard workers as do associations which represent, lobby for and support the wine grape growers. Frey explains that while other parts of the ag industry pay only minimum wage, the relatively higher pay scale in Sonoma County might tend to neutralize organizing efforts. “I think,” he says, “the opportunity for unions to deliver value to their members probably is a little higher [elsewhere].”

Casimiro Alvarez, North Coast director for the UFW, strongly disagrees. “It’s not true,” says Alvarez. “In some vineyards, people are making minimum wage, $8.50 or $9 [per hour]. Some people make more, but they don’t receive benefits.”

Five North Bay vineyard operations are currently under contract with the UFW, representing about 700 vineyard workers in Napa and Sonoma counties combined, according to Alvarez. That’s a far cry from the UFW’s glory years, but Alvarez attributes it to both grower opposition to labor unionization and to their increasing reliance on outside contractors to hire the vineyard work force. He points out that about 300 of the 700 local UFW members work for contractors, emphasizing how difficult organizing outside contractor-hired labor is.

“The majority of the farm-labor contractors bring the laborers in from the Central Valley,” Alvarez says. “I go to the field and try to explain to workers what rights they have under our union contract, but they are afraid. The problem is these workers are afraid to be fired.”

When Alvarez ranks vineyard worker desires, respect tops the list, followed in order by improved working conditions, better wages, benefits and paid holidays. These, he insists, will only be accomplished through union membership, but, says Alvarez, “The grape-grower associations, they don’t want the union, and the majority of the farmers are intimidating the workers not to have a union. Always they are trying to destroy the union.”

Labor writer, photographer and activist David Bacon concurs with Alvarez, though he has a somewhat different take on the situation. “I think that Sonoma and Napa counties are very good and very fertile grounds for organizing for a lot of reasons,” says Bacon. He cites older workers who were once UFW members and who remember the benefits and positive changes wrought by the union.

“And secondly,” says Bacon, “in some ways it’s easier for workers to organize if there already are somewhat better existing conditions.” He points to the Napa-Sonoma wine grape industry’s enormous wealth and profits, saying, “They have the money to improve conditions. That makes it a better place to organize.”