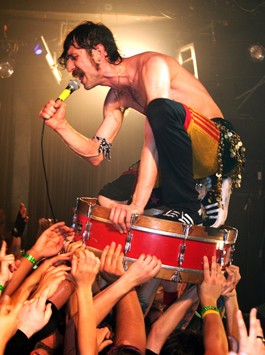 To some, the term “Gypsy” evokes images of nomadic roadside swindlers or exotic, belly-dancing temptresses. Sebastopol’s California Herdeljezi Festival seeks to shatter these myopic stereotypes, notably aided this weekend by a solo appearance and DJ set from Eugene Hütz, explosive frontman for New York gypsy-punk collective Gogol Bordello. Having spearheaded the movement in recent years with an exuberant blend of Eastern European and Western styles, incorporating everything from fiddles and accordions to punk guitars and reggae dub, Gogol Bordello’s cult following and acclaim have increased exponentially.

“By being a touring ‘Gypsy’ rock and roll band, I think we’ve become quite a big connector of links and dots between many Roma in different countries,” says the charismatic singer, on tour in Europe, with a thickly accented growl. “It’s especially important to get them going in North America, which appears to be the least educated about Gypsies and gets by on the Hollywood stereotype.”

This reeducation has reached a huge audience with Gogol Bordello’s latest album, the critics’ favorite Super Taranta! “It’s a much more advanced record in a lot of ways,” says Hütz, “chiefly in songwriting and band performance, and simply because we became that much more fucking awesome.” Bravado, sure, but the band has a mission beyond mere self-aggrandizement: to introduce their Eastern European roots to the English-speaking world, just as their namesake, Nikolai Gogol championed the Ukraine in Russia.

Sani Rifati, founder of the nonprofit Voice of Roma that’s producing the event, agrees. “When it comes to the American public, it’s pretty devastatingly ignorant,” says the Kosovo native, who modeled the festival after the traditional Romani neighborhood celebrations of his youth. “When I talk about Roma [in my lectures to colleges nationwide], they think I’m talking about Roma tomatoes or think it’s because they are ‘roaming.'” Disturbed by assumptions of transience appearing again and again, Rifati cites the word’s root itself for an apt description of the too-often universally harassed ethnic group. “In the Romani language,” he says, “which is from Sanskrit and east India, it means ‘human being’ or ‘person.'”

Like Rifati, many Romani people find the term “Gypsy” continually damaging, but Hütz has seen its use as a necessary evil. “You need to lead people to the true origins of Romanis, but if you start with no point of reference, you immediately miss their interest,” he says. “It is unfortunate the only thing people really know about [us] is the word ‘Gypsy’ and its dubious connotations, so you have to meet them halfway. Many don’t have a hang up about it—neither do I, just like the Gipsy Kings.”

Rifati believes Hütz is the next Freddie Mercury and that Gogol Bordello’s popularity is vital to modern Romani awareness and Voice of Roma’s efforts to aid struggling Roma in Eastern Europe, which include the organization’s literacy, education and small-business programs for displaced Roma in Kosovo. “We need the fresh blood, because I think once people get into middle age, it’s very hard to change their mentality,” he says. “When you’re younger, you’re more open-minded.”

This partnership, which recently included a benefit show with Gogol Bordello at the Warfield Theater in San Francisco, began the Romani way—through a strong sense of sprawling community. “The international Romani activist scene is well-connected simply by word of mouth,” says Hütz. “Even if I’m in Hungary in a parking lot, I’ll see a Romani family and go up to talk to them, and they’ll end up knowing someone I know. It’s almost like there’re no degrees of separation between the people fighting for the cause to bring up and establish a new progressive image of Roma.”

“There will be plenty of surprises for both experts of Gypsy music and the beginners,” Hütz says of this weekend’s festivities. “It’s not really about just playing Romani; it’s about creating new juxtaposition of styles that shows driving and revolutionary force of authentic music.”

The 12th Annual Herdeljezi Festival takes place Friday and Saturday, May 2 and 3. On Friday, Eugene Hütz joins a panel discussion at 8pm and spins a DJ set at 9:30pm at Sebastopol Veterans Hall, 282 High St., Sebastopol. On Saturday, Hütz performs both solo and sits in with other Romani musicians throughout the day at Ives Park, Sebastopol. For full schedule and ticket information, visit [ http://www.voiceofroma.com/ ]www.voiceofroma.com.