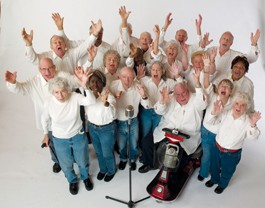 When I grow old, I shall not wear purple. I shall instead live someplace dark and dreadful, surrounded by forbidden books, masking the smell of my decay with clouds of some as yet uninvented incense that doesn’t make my nose run. I shall look exactly like Ian McKellen, full of decades’ worth of vices no clean person wants to even think about.

I will be the master of the macabre, the epitome of evil, the most sinister man to crawl the face of the earth. I’ll be devoting myself utterly to music, trying to master the well-known Bach Toccata on the organ at 3am, my way of letting the neighbors know I’m thinking about them, even while they sleep. I’m going to open doors no man should enter. I’ll prop them open with eldritch rubber doorstops from some Lovecraftean hardware store. If I should break wind, as old men must, I’ll tell visitors that it’s just a gust of brimstone left over by a recent visit from my friend for eternity, Beelzebub. In comparison, Aleister Crowley will look like the asthmatic punk he was.

In Northampton, Mass., Bob Cilman has kept a choral group of senior citizens going for some 25 years; some come and, naturally, some go. The lineup as of 2006 is observed on its way to a big public show at the local art center, along with stops to entertain prisoners at a local jail with Dylan’s “Forever Young.” My favorite part: the total mawkishness of the song is overcome by the serious surroundings. Here, the chorus offers a musical benediction to a group who probably never thought very much about what their own old ages would be like.

The peppy British director Stephen Walker is one of those overtalkers, with the upbeat, impossible-to-tune-out persistence of a tour guide. Repeatedly, he exclaims over the efforts of this hardworking group, and he is repeatedly flabbergasted by the urge of these old people to perform. Over the months of observation, the group is driven through some more modern compositions, such as the Ramones’ “I Wanna Be Sedated,” “Stayin’ Alive” and “Schizophrenia” by Northampton’s own Sonic Youth.

On the whole, these are all relatively simple songs, if often beyond the ken or outside the taste of some of the singers here. (One interviewee, Eileen Hall, misses the old days when they used to sing “Yes, We Have No Bananas.”) There’s something touching about hearing a singer testing his limits. The rhythms of James Brown’s “I Got You (I Feel Good),” for instance, are a real stumbling block. On a more obvious level of pathos, these are men and women singing with some of their last breaths. Especially sad is one Fred Knittle, a hearty joker with a big voice, who is losing control of that voice due to the ravages of a bad heart. The notes comment that Knittle had to be wheeled to the camera because of his health.

Even as one mentally plans one’s own retirement during the slow parts of the show (can vultures be domesticated? do you suppose they would gnaw on the electrical wiring?), one admires the bravery here. In particular, Hall, an aged former stripper from England, keeps her flirtatious streak; in her own way, she insists she’s the same person she always was.

I’m a longtime fan of Clyde Forsman, the octogenarian musician who was at the core of Those Darned Accordions; Forsman’s version of the Rod Stewart sleazefest “Do Ya Think I’m Sexy” is never without sex appeal. I wanted to encourage this film when I first heard about it, even if it meant overcoming my lifelong prejudice against the life-affirming.

Others might have less reservation and just wonder at the spryness, bravery and humor of the cast. [email protected] demonstrates the toughness of old people close to the end, even when they’re weakened with hospital stays and surgery and loss. It’s a great subject, but not a great film, because of the glancing (might one say youthful?) impatience of the camera and the director, urging us all to move along.