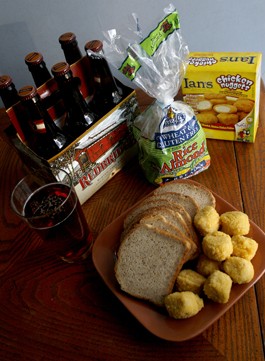 OH, YUCK: This bland assortment of the gluten-free makes one fervently wish for a stalk of broccoli.

I‘m no dieter. In the food pyramid of my life, pizza and beer each enjoy their own trapezoid. But on a dare, I enlisted the office “glutards,” Molly and Maree, to help me give up gluten, a protein found predominantly in wheat, rye and barley, for two weeks. Unfortunately, that means it’s abundant in foods like bread, pasta, desserts and, sigh, beer. Neither Molly nor Maree has had gluten in years. “It totally changed my life,” Maree assured me.

Gluten-free food is a $2 billion business, far surpassing the possible consumption of those relatively few people who have the autoimmune intolerance of gluten, called celiac disease. The anti-gluten buzz has given the diet a violent shove into “trend” status. After all, “Oprah did it,” as I was informed more than once in the course of my experiment.

Though Oprah was (again) trying to lose weight, going off gluten can supposedly fix problems ranging from gas to bloating, fluid retention, headaches and skin conditions, but Molly and Maree told me it can go further than that. While enumerating my vague health problems—lethargy, mild depression, cloudy thinking—Molly excitedly gasped, “You might totally have a food allergy.”

What the glutards described was not just a weight-loss program. It offered the possibility that things I had figured were personality traits—gloomy mood swings and general laziness—were actually treatable with a simple diet change. Like the addict I am, I first insisted on a ravioli binge, and then agreed to give it a try.

Molly had given up gluten under the guidance of a naturopath whose practice emphasizes the effect of one’s diet, and often recommends a wheat-elimination test. “I started eliminating it for weight and then I started realizing how good it made me feel,” the doctor said. “Everyone is a little different in terms of their tolerance.”

People who are “sensitive” to gluten have trouble processing the protein, which has become overly abundant in modern foodstuffs. Although no one can actually digest gluten (it passes through us), a lower tolerance can cause problems like, perhaps, my lethargy and moodiness.

The naturopath recommended that I try giving up gluten for two weeks and then “challenge” it by returning to my old habits to see how I feel. “You’ll start to develop a taste and liking for these substitute products,” she predicted. “Once you challenge the wheat, you’ll realize how crummy you feel.”

She armed me with a couple of handouts, which merely sent me into full-blown panic. Not only was I going to have to give up the things I crave most—pasta, pizza and beer—but wheat and gluten are apparently hidden in soy sauce, soup, ketchup, sandwich meat, cereal, processed cheese and sauces. It seemed endless.

I hit the natural-foods market to see what my options were. At first, I went looking for things that said “gluten-free” and found at least 50 products that make up the ranks of that $2 billion industry. There’s even an Anheuser-Busch beer called Redbridge made out of sorghum. With a shopping bag of rice-almond bread, a rice-crust pizza, a gluten-free pasta and a six-pack, I figured I really wasn’t giving up anything.

That, of course, was before I tried any of it.

My pizza was tasteless and soggy beneath the cheese. The beer was too sweet, and the gluten-free pasta, though the package actually promised that it was “not mushy,” was just that, and turned into a gluey mess at the bottom of the pot.

The night after I tried to make a meal out of the pasta, I decided to weigh myself. I found I’d shrunk to my high school weight. That was definitely not a good thing. After a week of pushing my food around the plate, I was merely starving myself.

I realized that even more after I talked to Dr. Susan Algert, a nutritionist at the Wm. K. Warren Medical Research Center for Celiac Disease in San Diego. “It’s being recommended for weight loss, and there’s absolutely no reason for that,” she said. “It’s not really a good idea to leave a whole group of foods out of your diet.”

She warned me that self-diagnosing can be a pretty bad idea, especially since so many of the wheat-replacement products are made of rice and corn. “Many of the gluten-free products are not enriched with B vitamins,” she said. “That’s needed for energy. A person’s not going to feel well without them.” She recommended I make sure I get whole grains from things like brown rice, quinoa, couscous, bulgur and teff. And, she reminded me, only about 7 or 8 percent of the population is sensitive to gluten.

After Dr. Algert’s stern warning, I figured I would eat normal foods that do not contain gluten. I took up tamales and tacos, brown rice and beans, lots of green vegetables, and my mom’s Chinese recipes with tamari instead of soy sauce. I easily gained the weight back, and then something sort of cool happened: one night after dinner, I didn’t slink off to my room to lie in bed. I worked. I chatted with my roommate. Another night I went for a bike ride.

This was probably the biggest difference; I did not become any less moody, as my long-distance boyfriend can attest. I still had my down moments. The little pouch around my belly button did not shrink, meaning it isn’t “inflammation” or “water retention,” but just plain old fat. Turns out I’m a woman.

After the two weeks, per the naturopath’s recommendation, I challenged myself with a big ol’ box of macaroni and cheese, and crashed hard at 8:30pm. But the next morning I got up easily and had much the same type of day that I had when I was off gluten. Everything felt pretty much the same.

But perhaps that’s just me. For people like Molly and Maree, the diet seems to be life-altering, so it could be worth a try with a healthy dose of skepticism and plenty of real food. The wildly varying promises in magazines sometimes fail to mention that the majority of the population can digest gluten just fine, but it does happen to occur in some of our most unhealthy foods. In a way, the proper gluten-free diet is just like any recommended health regimen—whole grains, fruits, vegetables and protein, lay off the pizza and beer. Like that’s going to happen.