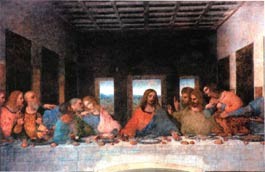 ‘In Leonardo da Vinci’s day, paintings were the mass media of the time,” says novelist and art historian Javier Sierra. “Obviously, there were no movies and no television, and there were very few books, because almost nobody could read. For entertainment, people played music, and when they could afford to do so, they traveled to see the latest paintings by the different artists. Today, every new movie wants to be a blockbuster. When Leonardo unveiled his Last Supper, it was a tremendous event. People came to Milan from all over, and then they lined up in the streets to get into the convent Santa Maria delle Grazie to see the mural for themselves. Leonardo, at that time, was a tremendous superstar, and the Last Supper was his blockbuster.”

Sierra’s entertaining new historical thriller, The Secret Supper (Atria; $25.95), tells the story behind da Vinci’s Supper, the great artist’s most famous and controversial work. The English translation of the novel, a tremendous hit in Spain, is currently No. 8 on the New York Times bestseller list. Though the potentially heretical, message-concealing da Vinci is a major character in the book–along with various true-life and fictional priests, cruel inquisitors, corrupt dukes and double-dealing servants–the star of the piece is the painting.

In early April, with Sierra in the Bay Area to promote his book, I pack up my laptop and a stack of DVDs and arrange to meet Sierra at a San Francisco teahouse where we share a first supper of our own–dim sum and tea–as I subject the author to a series of cinematic Last Supper scenes, each from a range of famous Jesus-themed movies: The Greatest Story Ever Told, The Passion of the Christ, The Last Temptation of Christ, Jesus Christ Superstar, Godspell and Life of Brian.

It’s been a while since either of us watched most of these films, and it appears that neither Monty Python’s Brian nor Mel Gibson’s Passion contain an actual Last Supper scene. Brian, we now remember, gets arrested before eating, and the Passion begins in the Garden of Gethsemane, immediately after supper. As Sierra explains the historical significance of da Vinci’s famous painting, I pop The Greatest Story Ever Told into my computer and scene-search ahead to the precrucifixion chow-down.

“Before Leonardo,” says Sierra, “whenever someone painted Jesus and his disciples, they were painted with halos. In the Last Supper, Leonardo painted, for the very first time in the history of painting, this scene with Jesus and the disciples as ordinary men, not as saints. It was also the first time that Jesus was painted without the Eucharist in his hands, the loaf of bread and the wine of communion. All previous Suppers painted by the great masters of the Middle Ages and Renaissance celebrate the moment when Jesus is creating the Eucharist, but here that is not the case.

“Also, for the first time in history, it is not easy to find Judas in the painting. Before Leonardo, Judas was always the one seated furthest away from Jesus and the good disciples, and he was always the one who has no halo. In Leonardo’s painting, any one of them could be Judas. So in a way, it’s a riddle, an intelligence test. It’s Leonardo’s little find-the-traitor game.”

In 1965’s mostly ludicrous Greatest Story, the Last Supper begins with Judas entering the upper room where the feast is already in progress. The first thing Sierra points out is that, unlike in the da Vinci painting, Jesus (Max von Sydow!) manages to glow in all of his close-ups, a halo of back light making it clear who’s the savior of the universe and who’s merely a famous international actor (Jose Ferrer) shocked as hell to be playing an apostle in a movie where John Wayne dresses up as a centurion to drawl, “Surely this man was the son of God.”

“This scene reflects a lot of the classical elements that da Vinci left out,” observes Sierra. “It contains the bread, the Holy Grail–and the halos–but in Leonardo’s version, there is no bread and no grail. The Catholic icons are gone.” And of course, Jesus and his posse are all lined up one the far side of the table, each character thoughtfully facing the audience. “I’ve always thought that it must have been very hard for Jesus and his disciples to talk,” Sierra says, “with them all spread out in a line like this. Everyone would have had to shout all night long, just to be heard. Not exactly a beautiful, spiritual moment.”

Next up is Martin Scorsese’s 1988 film The Last Temptation of Christ, in which the Last Supper is preceded by gory scenes of Jewish priests wading about in lamb’s blood, carrying bowls of sacrificial animal juices back and forth from the altar in Jerusalem. As Scorsese films the famous supper, the disciples, joined here by a whole pack of women, are seated on the ground in a square formation, gathered in overlapping clusters around a tablecloth crammed with Passover munchies.

“This is very interesting, because it is the only one to reflect the Hebrew Passover,” says Sierra. “In many of the others, it is a very Catholic, very Christian supper that these people are having, but in the Scorsese film, you remember that these were Jews observing a Jewish feast. I think this is the only one where there is a Menorah set among the food. That is very interesting.”

We make quick work of 1973’s Godspell, in which Jesus (Victor Garber) is a clown leading his face-painted apostles through a Last Supper held in a junkyard, with the wine served in Dixie cups. Sierra, who has never seen it, watches in a kind of studied horror.

“This is a little too hippie for me,” he finally says.

If nothing else, it’s a perfect segue to our last movie, also from 1973: Jesus Christ Superstar. Filmed in Israel, the movie version of Tim Rice and Andrew Lloyd Webber’s musical stages the Last Supper as a picnic held in broad daylight under a grove of olive trees.

“It’s the Last Lunch!” Sierra quips. “I’ve never seen that before. Interesting that there are so many sheep around. That’s a very 19th-century theme–Jesus and his Church, Jesus and his sheep. And look, they are all lined up in a row, on one side, like in Leonardo’s painting. Of all these movies, only one dared to break that visual idea, and that movie was The Last Temptation.”

Asked to speculate as to what Leonardo might have said about Scorsese’s daring move to break up the iconic supper line after 500-plus years, Sierra thinks for a moment.

“He’d probably just say, ‘Bravo! It’s about time somebody did that.'”