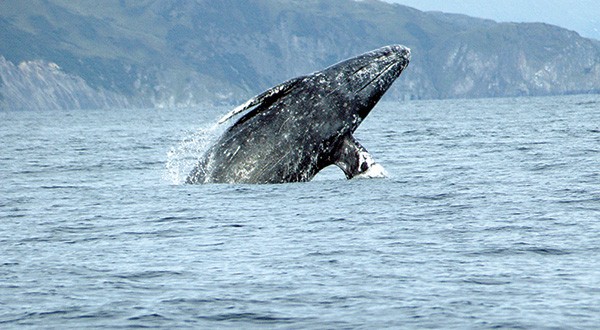 What Ails the Whales

Heart’s Desire beach on Tomales Bay is deserted this morning as my three companions and I put in our kayaks for a day of paddling. The bay is still and glassy with a blanket of fog above us. We are headed north, paddling steadily toward Hog Island, the mouth of the bay—and the possibility of seeing some of the marine life this area is so well known for.

Within just a few minutes, a seal pops its head up out of the sea a few yards away. She watches us for several minutes before diving under again. Overhead, an osprey scans the depths for a meal while we marvel at the ease and grace of its flight.

An hour and a half later, we pass Pelican Point, and as we come parallel to Hog Island, we pause for a better view of the myriad birds roosting there about a quarter of a mile to the east. There are pelicans, gulls, cormorants and more as we scan with binoculars.

We then turn west, approaching White Gulch Bay, and suddenly, about 20 feet in front of me, there is an enormous 15-foot-high spray.

“Look! It must be a whale!” I shout to my companions.

“Can’t be a whale in Tomales Bay,” my friend replies, incredulous.

And then the magnificent creature breaches, arcing its 40-ton, 45-foot-long body out of the sea for us all to see. It was definitely a whale.

The Pacific gray whale is named after its predominantly gray skin color. As we got closer, we saw that the color was patchy and mottled with white spots, which were barnacles. Various scars were also visible, possibly teeth marks from attacking orcas. Orca whales, also known as “killer” whales, are known to cause fatalities among gray whales. Gray whale cows are very protective of their calves, having developed violent defensive behavior.

Making an annual migration of 10,000 to 14,000 miles, the longest of any mammal, gray whales inhabit the shallow coastal waters of the Pacific as they travel south in October from the Bering and Chukchi seas off the coast of Alaska to the mating and calving lagoons in Baja, Mexico. The journey takes two to three months, and the whales stay in the lagoons for the same period of time.

When the whales make the return trip north, usually from March through May, the cows and calves swim closer to shore than at any other time of the year. The calves move more slowly than the adults and are still nursing, so both cow and calf may stop in the shallower areas and surf zones to rest or nurse. Given the geography of the Sonoma and Marin country coasts, the Point Reyes Lighthouse and Bodega Head are particularly good vantage points for viewing whales year round, but especically in the spring months due to this proximity to cows and calves.

Tomales Bay was formed by a cleft in the earth that is an extension of the San Andreas Fault line. The Point Reyes peninsula is actually a piece of Southern California that has been carried northward several hundred miles by the fault over the last 25 million years. As it moved northward, the peninsula accumulated rocks from several different places in south and central California, making it very interesting from a geological perspective.

But the whales find Tomales Bay interesting for another reason. Tomales Bay is just 15 miles long and averages a mile wide, but is surprisingly deep in places due to its fault-line origins. The narrow mouth and elongated shape of the bay offers shelter and shallower water to the whales, perhaps representing to them a tiny version of the calving lagoons in Baja. The Point Reyes peninsula shelters the bay from the more intense winds out of the west and northwest. The narrow mouth at the end of Dillon Beach, at approximately 30 feet deep, is deep enough to offer passage to the immense whales while still minimizing the effects of ocean currents.

There were once three major populations of gray whales: the north Atlantic; the Korean, or western Pacific; and the existing north Pacific population that includes northern California. The north Atlantic population is now extinct, and the western Pacific is severely depleted, both probably due to over-hunting. Twice hunted to near extinction, the north Pacific gray whales at one time numbered only 2,000 individuals. Granted full protection from hunting in 1947 by the International Whaling Commission (IWC), their numbers have rebounded.

But now global warming and the melting polar ice caps are endangering the north Pacific population. According to scientists, the gray whales numbered 26,000 in 1990 but are currently at 21,000 with the drop attributed to a change in habitat caused by the warming water and consequent loss of food sources that require cooler ocean temperatures.

When they’re in the Arctic waters of the Bering and Chukchi seas, for example, whales eat small organisms, called “benthic arthropods,” from the ocean floor; these organisms are in turn fed by algae, most of which fall from the bottom side of the polar ice sheets. With the sheets melting under climate change, less food is becoming available to the benthic organisms, which depletes their numbers, and so provides less food for the whales in their summer habitat.

So though the current Pacific gray whale population may be near its original numbers, there seems to be a decreasing trend which concerns scientists and all who are interested in the health of our planet.

There is another effect of a warming climate on the Pacific gray whale. Since the ice sheets are melting, the whales need to go farther and farther north in order to find available food. This lengthens the distance of their migration when they return to the birthing lagoons in Mexico. This longer migration means the whales are not as well fed as they used to be, and, according to scientists, many probably rest more often in the shallower coastal waters along their migration route.

Additionally, one of the navigational techniques that whales use is visual geographic reference. A whale may orient itself vertically in the sea with its head above water as it “looks around” for visual references. This is called “spy-hopping,” and the most coastal of all whales, the Pacific gray whale, is particularly known for this type of behavior.

All of these factors make whale sightings more likely year round, but also beg a caution: whale watchers, fisherman and all boating and shipping traffic should take care not to harass or molest any whale, particularly any that appears to be compromised.

ABOUT THE GRAY WHALE

Physical Description A streamlined body with a narrow, tapered head. No dorsal fin, but about two-thirds of the way back on its body there is a prominent dorsal hump followed by a series of six to 12 knuckles along the dorsal ridge that extend to the tail lobes or “flukes.” Its flippers are paddle-shaped and pointed at the tips. Its fluke is about 10–12 feet across, pointed at the tips and deeply notched in the center.

Natural History Migrating gray whales have predictable breathing patterns, blowing three to five times in 15- to 30-second intervals before submerging for three to five minutes. A gray whale can stay submerged up to 15 minutes and travel at three to six miles per hour.

DO’S AND DON’TS OF WHALE WATCHING

Whales can be seen off the Sonoma and Marin coasts almost year-round, but sightings peak from December to May. Best places to spot them from land include Bodega Head, Point Reyes Lighthouse, Salt Point State Park, Stillwater Cove Regional Park and the Jenner Bluffs.

• Cut across a whale’s path

• Get between a whale cow and her calf; if separated from its mother, a calf may be doomed to starvation.