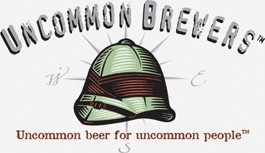 Alec Stefansky learned to make beer in his UC Santa Cruz dorm room, where he hid five-gallon batches from campus authorities and shared home-brewed pints among his roommates. It was a common enough way to begin.But today, the 31-year-old is a professional brewer quickly ascending the ranks of West Coast weird-beer stardom. Since founding Uncommon Brewers in 2007, he has lived up to the company’s name. The Siamese Twin Ale brewed with Kaffir limes leaves and lemongrass has become a favorite of thousands, and far stranger brewings are now bubbling down the pipe. Most recently, Uncommon Brewers, operated by Stefansky and assistant Reed Vander Schaaf, released Rubidus Red Ale, a strong ale brewed with dried candy cap mushrooms. Stefansky, a recreational mushroom hunter, has amassed a five-year dried stash of the potent and expensive fungus, which smells strongly of maple syrup, and is steadily portioning the mushrooms into batches of the brew.

A beer even queerer is about to go public. The Bacon Brown Ale, currently undergoing secondary fermentation, is as brown as it sounds—and it’s brewed with real bacon. On the calendar for release this spring is a barleywine aged with redwood branches. Stefansky says the wood’s tannins bridge the gap between the bitter hops and the sweet malt. This he discovered quite by accident at an Oakland A’s game in 2004, when he opened a home-brewed version of the beer, which runs almost 15 percent ABV, and found a volunteer redwood bud floating in the bottle.

“It tasted great,” he recalls. “The beer’s flavor had been missing something, and the redwood filled the gap.”Stefansky counts among his inspirations Dogfish Head Craft Ales in Delaware, renowned for its unusual beers and malt beverages, and he feels it’s time that more American brewers deviated from traditional European styles and developed their own. For now, Stefansky’s beers are all brewed to standard style guidelines, but the strange complements added to each beer toe the lines of conformity.

While taste, aroma and mouthfeel may gain a brewer praise, success is best measured in numbers, so taste these: Uncommon Brewers made 194 barrels of beer in 2008 and 450 in 2009, but this year, Stefansky says he will generate 6,000 barrels of beer. Put another way, by April Uncommon Brewers will be making in one day what it previously took three months to produce.

Is Stefansky brewing more than he can chew? He says no. “People want the beer, but I just can’t make enough.”Find Uncommon Brewers’ beer at Whole Foods, Mondo Beer Garden, and better beer shops throughout the North Bay.