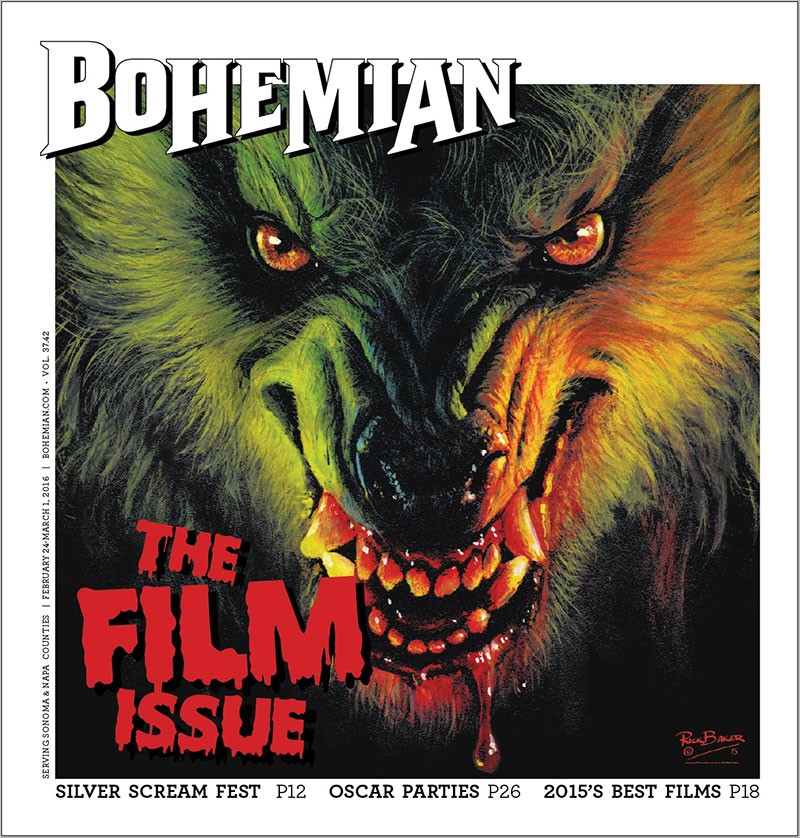 If Philip Kim has his way, Santa Rosa will become the Sundance of horror and genre films. The senior manager of Famous Monsters of Filmland magazine and longtime Sonoma County resident is teaming with Neil Pearlmutter, vice president of the Santa Rosa Entertainment Group, to present the inaugural Silver Scream Film & Comic Festival on March 4–6 at the Roxy 14 Cinemas in downtown Santa Rosa. The three-day event will feature special Hollywood guests like director John Landis alongside up-and-coming independent genre filmmakers and comic-book creators.

Born in South Korea, Kim emigrated to the United States with his family at age six and grew up in San Rafael. “I remember one of the first things I saw on TV was Twilight Zone, and I was enthralled,” says Kim. “I was learning English while I was watching it, but the concepts were mind-blowing.”

Kim was also obsessed with comic books as a kid, drawing his own and writing fantastical stories. He moved to Sonoma County to attend Sonoma State University, earning an economics degree and working as a real estate developer until his mid-30s. That’s when he discovered that the classic genre-film magazine Famous Monsters of Filmland was up for auction in 2007.

“I grew up on the magazine and was amazed that it was available, so I grabbed it,” Kim says.

Launching Famous Monsters as a website first, Kim eventually got into the print game in 2010, reviving the magazine as a bimonthly publication. Today, Famous Monsters is the bestselling magazine of its kind. Kim also steers the comic-book division of Famous Monsters, producing horror and genre comics under the American Gothic Press label. He has found additional success in the film and comic-book convention scene.

After splitting time for the past five years between Sonoma County and Los Angeles, where the magazine’s office resides, Kim is bringing the monsters to the North Bay with the Silver Scream Festival.

“I live in Santa Rosa, and I never thought that there was a deep enough market in Sonoma County or Northern California for what I do,” says Kim. “But then I started seeing toy conventions come up and the Roxy’s CULT series, and there is a very robust fan base here.”

The CULT film series is Neil Pearlmutter’s brainchild, a semi-weekly double feature of vintage horror and sci-fi films, largely from the 1970s and ’80s. “I see it as a way to bring this community together by doing something a little different,” says Pearlmutter.

Now Kim and Pearlmutter, friends for years, are teaming up to present the Silver Scream Festival, offering a slew of classic Hollywood horror films and new features from underground filmmakers over three packed days of screenings, signings and panels.

Headlining the event are director John Landis, special effects wizard Rick Baker and actor David Naughton, all of whom will be on hand for a 35th anniversary screening of Landis’ 1981 film An American Werewolf in London on Saturday, March 5.

Landis is best known for his comedies, helming classics like The Blues Brothers and Animal House, though his foray into horror is today considered a landmark in the genre.

An American Werewolf in London updates the classic Universal Pictures monster to a modern-day setting. In a time before computer-based special effects, Baker transformed lead actor Naughton from a goofy American on vacation into a realistic lycanthrope that preyed on unsuspecting Londoners. Baker took home the Oscar for best makeup that year, and his work has long been held as the standard for such effects.

“It’s fascinating to hear these guys [Baker and Landis] talk about what they went through to create these visual effects,” Kim says. “They just loved the genre, and it shows.”

Kim says Baker’s work was the inspiration for a lot of contemporary horror films. “They did something with what was already there, and took it to a point where it completely transformed the way Hollywood makes films,” he says.

The Silver Scream Festival is also honoring another genre-changing force in filmmaking, presenting a tribute to the late Wes Craven with screenings of his films and appearances by three of Craven’s closest colleagues. Actors Robert Englund and Heather Langenkamp and producer Marianne Maddalena will accompany screenings of Craven’s Nightmare on Elm Street and New Nightmare on Friday, March 4, and Saturday, March 5.

Englund is best known as Craven’s most famous monster, Freddy Krueger, and with over 150 acting credits to his name, he is still very busy. Yet Kim says he and Langenkamp immediately signed on for the event when they heard about the tribute.

“They just said, ‘Tell us where it is,'” Kim says. “Robert especially wanted to honor Wes.”

Englund, Langenkamp and Maddalena will also speak on panels and take audience questions about Craven’s lasting legacy in film, though the topic of Craven’s famously bitter feud with the Santa Rosa school board over the making of his 1996 teen-slasher hit Scream can probably be skipped.

For those who don’t remember, Craven wanted to film several scenes at Santa Rosa High School, and reportedly reached a verbal agreement with the school’s principal to do so. Yet the school board denied him access days before filming was to begin due to concerned parents and press who criticised the film’s violent nature. Though much of Scream was shot in and around Sonoma County, the film’s end credits still say “No thanks whatsoever to the Santa Rosa City School District Governing Board.”

Silver Scream also honors the birth of the horror movie with special guest Bela Lugosi Jr.,
son of the original Dracula and steward of his father’s legacy. Lugosi Jr. will speak on Saturday, March 5, after an afternoon of screening several of his father’s films, including Dracula.

“I don’t know if people know this, but Lugosi was a stage actor before he was a film actor,” says Kim. Lugosi originally played Dracula onstage, where Carl Laemmle Jr., head of Universal Pictures, discovered him in 1931 and adapted the stage show into a film.

Dracula was the first talking horror film in Hollywood history. It was such a huge hit that many film historians credit it, and other Universal horror films like Frankenstein, with saving the studio.

“The Universal monsters are as classic as it gets, they started it all, and Bela Lugosi is probably one of the most famous names in early Hollywood,” says Pearlmutter. “Having his son here to talk about what his father accomplished in this genre will be amazing. And, honestly, I think it lends credibility to this festival for people who think horror is a ‘lesser’ genre. I think everyone respects what Bela Lugosi did for cinema. I hope it lets people understand horror, where it started, where it is now and what we are celebrating.”

Other guest appearances include filmmakers like ’80s grindhouse auteur William Lustig, who will be showing his 1988 horror-action classic Maniac Cop, and modern horror director Jessica Cameron, whose 2015 film Mania, which will also be screening, has already won top honors at several underground film festivals. Both screenings happen on Sunday, March 6.

Aside from the special guests, the festival also includes an awards-based film competition with categories ranging from feature-length and short films, screenplays and concept art, as well as off-the-wall categories like “Best Love Scene Amidst Terror.”

“With the digital revolution, there’s an amazing amount of production value and quality from these indie filmmakers who are working outside Hollywood,” Kim says.

Amateur filmmakers from around the world submitted their works over the last six months, and Silver Scream will be showing new genre films from the Middle East, Japan, Mexico and South America, as well as a fresh crop of homegrown American horror.

“The beauty of [the festival] is that you get to see cultural horrors,” Kim says. “As much as horror and science fiction transcend boundaries, there are still things specific to a country’s lore that may not necessarily frighten you or me, but it frightens that culture. And when it is done well, it is scary.”

Aside from films, Kim’s obsession with comic books is as strong as ever, and he is finally getting the chance to help create them through his American Gothic Press, established last year. With Kim’s guidance, the comics coming out of American Gothic are a supernatural mix of classic monsters and original storytelling that boasts talents like writer Steve Niles (30 Days of Night).

“We go to a lot of comic conventions, and the one thing we always notice is that there’s not a lot of conversation about how the business works, about how to get your creative stuff published and what steps need to be taken to compete in the marketplace,” Kim says.

With that in mind, Silver Scream will be offering panels and discussions with comic-book creators and artists such as Darick Robertson. A Bay Area native now living in Napa, Robertson co-created the landmark indie comic book series Transmetropolitan with Warren Ellis, and has worked for Marvel, DC, Vertigo and others.

“He is going to become a very important name in the coming years,” Kim says. “His own story about how he got started is pretty astounding. I think it will be hugely valuable for anybody who wants to create comics or screenplays.”

Along with film awards, the festival will be judging and presenting awards to amateur comic book artists and writers, and the winner of the award for best comic book will get his or her work published in American Gothic Press.

Both Kim and Pearlmutter hope that Silver Scream evolves into a destination event for those in and outside of Hollywood.

“The idea is to definitely grow this event to be a film festival that’s open to anything on the odd side of mainstream,” Pearlmutter says. “We want to give people a new reason to visit Sonoma County and we want to bring some fun to the area for those who call Santa Rosa home.”

Next ArticleFeb. 29: Young on Film in Napa & San Rafael