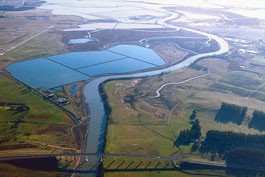 A considerable number of landowners along the Napa River are getting scrutinizing visits from Sacramento as of late, as newly hired enforcement agents from the State Water Resources Control Board (SWRCB) have begun peering at ponds to see who might—and might not—be taking an unfair share of the valley’s water flow.

After studying aerial-photo maps of various water storage sites near the Napa River, the SWRCB sent 125 letters to owners of properties, asking for replies and follow-up site visits to check on illegal diversions from the river’s flow. “We didn’t single out any entities,” says Aaron Miller, a SWRCB senior water engineer. “Basically we’ve identified water bodies that, based on our records, don’t appear to have a water right and we’re investigating to see whether or not they do.”

Water flows are critical fish habitat, and diversions can harm fish populations. So some see the state’s action as an effort to crack down on water thieves. Chris Malan, of the Living Rivers Council, claims that “287 illegal water diversions” exist where “diverters are stealing water at will.” But Leigh Sharp of the Napa Natural Resource Conservation Service claims the story is not that exciting.

“It’s an enforcement thing,” said Sharp. “It’s been anticipated for a while and the State Water Board is not even sure that all the cited ponds are even diversions.” There could be land with a pond created in the 1930s, and a more recent landowner may not know they need a permit. Some older reservoirs were created with government funding. “It’s worthwhile to note,” added Sharp, “that the cited pond locations are not just vineyards but homes, golf courses and municipalities.”

The Napa County Farm Bureau has encouraged landowners to comply with the state, since non-compliance could—as the Bureau explained in a message to members—result in “fines assessed at up to $500 per day.” Vineyard manager Jim Lincoln, representing the Farm Bureau, believes that the majority of ponds targeted for investigation by the SWRCB are not diversions but storage of groundwater, and that for many surprised recipients the letters provoked a fearful response. “We think a lot of this is unjustified,” said Lincoln. “I had a long conversation with an 80-something year old gentleman who had no idea he needed a permit.”

If the octogenarian applies today, there’s a chance he may not live to see the permitting process completed. One Napa farmer, trying to do the right thing, applied in 1990 to the SWCRB for a permit to divert water, and finally got it in 2010—exactly 20 years later.