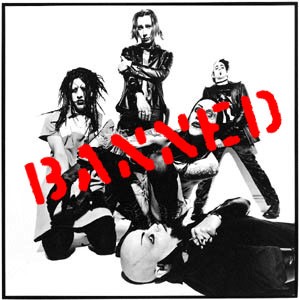 Banned in Rohnert Park: Is Marilyn Manson too nasty?

The nation’s biggest retailer is under fire, not for gun sales (sorry, Sheryl Crowe), but for censorship of rock and rap CDs.

SNOOP Doggy Dogg is being executed in the aisles of my local Wal-Mart store. A dozen or more display TVs in the aisle next to the compact discs department are tuned to MTV, airing the video for “Snoop’s Upside Ya Head,” a cut from the platinum-selling gangsta rapper’s hit Tha Doggfather album.

In the video version, a white actor playing the warden of the prison in which the controversial rap star is held addresses a press conference in the voice of a circus ringmaster. “Ladies and gentlemen! It is with great pleasure that I welcome you to the first execution of a gangsta rap singer, Snoop Doggy Dogg!” he exclaims with a flourish. “Our country and its people will be renewed by the elimination of this scourge to propriety, this menace to wholesome values.”

He pauses to wipe some unsightly dust off the electric chair. “So, without any further ado, let’s juice him!”

In Wal-Mart, consider him juiced.

I ask a clerk where I can find the Snoop Doggy Dogg disc. “Hmm, well, I don’t think we have it, but if we do, it would be here,” he says, thumbing through the “S” bin of pop CDs. Sure enough, we don’t dig out that Dogg. This isn’t really a surprise. Wal-Mart has a policy of not carrying any CDs that carry the notorious parental warning label.

Still, I ask the young clerk why they don’t have it. “It’s a family store,” he elaborates. “We don’t carry other things that might bother people, like Marilyn Manson or Korn either.”

These are hit records. Up the street at a chain record store, they are arrayed on the wall in the Billboard Hot 100 display. Does anybody at Wal-Mart–which has an outlet in Rohnert Park and another planned for Windsor–ever complain about their absence? “Some people do,” he shrugs. “But it’s Wal-Mart; it’s not a real record store.”

Perhaps not, but it is a real power in the retailing biz. In some areas of the country, Wal-Mart is the only place to buy CDs or tapes. While it is well known that Wal-Mart doesn’t carry labeled CDs, the New York Times recently detailed in a front-page story how the chain and other big retailers are having an insidious effect on music and movie production. Like cancerous cells, adulterated censored CDs are proliferating in Wal-Mart’s bins, in many cases without being identified as such.

In some cases, CDs are altered to bleep out “bad” words. For instance, the cover of a White Zombie disc, Supersexy Swingin’ Sounds, was cleaned up by airbrushing a bikini onto a nude model reclining in a hammock (even though no naughty bits were visible). A song on the back of Primitive Radio Gods’ Rocket CD is identified as “Motherfker” in the aforementioned record store, but as “Mother” at Wal-Mart.

The New York Times also identified creepier instances of corporate power being used to suppress ideas. Wal-Mart won’t carry Sheryl Crow’s new record because she chides the company for allegedly selling guns to children. The figures of Jesus and the Devil flanking John Mellencamp on the cover of his new record, Mr. Happy-Go-Lucky, are airbrushed out of the copies available at Wal-Mart. Mellancamp reportedly OK’d the change in the interest of record sales.

In a sanitized world, apparently, we can’t acknowledge moral conflict. Since then, Usenet newsgroups have been buzzing with calls to “Boycott Wal-Mart!” and dialogues over whether it’s really censorship if the pressure on the artists comes from private corporations rather than the government.

And record companies are running scared.

This makes Sen. Joseph Lieberman, D-Conn., very happy. For the past few years, Lieberman, along with virtuecrat and former federal drug czar Bill Bennett, C. Delores Tucker of the National Political Congress of Black Women, and ex-Sen. Sam Nunn, D-Ga., have been leading the charge against the entertainment industry. Lieberman and his cohorts have targeted violent video games and trash-talk TV and, accepting the baton from Tipper Gore (who’s been quiet on the issue since hubbie Al Gore became vice president and L.A. record execs eagerly opened their wallets to the Clinton presidential campaigns), have lambasted record companies for promoting products that feature violent and misogynistic lyrics, particularly in rap.

“Some of the rap music and other music is just the most violent, anti-woman, pro-drug stuff that I’ve ever heard. So three cheers for Wal-Mart,” says Lieberman. “There is freedom of speech in this country–we’ve always said that in our appeals to the record companies to try and clean up their act–and just as there’s free speech, in a free market Wal-Mart doesn’t have to carry anything it doesn’t want to carry, and of course that has an effect because they’re such a big retailer.”

But does Lieberman–who says he got involved with Wal-Mart in the campaign to get ratings on video games–find the Mellencamp or Crow cases worrisome? “I have felt that the record companies, the big businesses that produce music, have been so irresponsible that my first reaction to the Wal-Mart story was, ‘Thank God that these people are being responsible’ and, generally speaking, I think that’s true,” explains Lieberman, who says he was briefed about the article and was not familiar with those particular details.

“But you have presented me with some cases where, if I were Mr. or Mrs. Wal-Mart, I would have done it a little differently, sure, but this will all work itself out.” He allows that “in the best of all worlds” Wal-Mart would inform the customer that CDs have been altered.

“My guess is, knowing how fast information flies, this will make people who are buying records skeptical and they may ask questions at the counter or they may decide to shop elsewhere,” Lieberman says.

And anyway, he adds, the consumer market is so big in this country that anyone can get anything–by mail even, if Wal-Mart is the only retail game in town.

Wal-Mart Rebels: Is Korn not wholesome enough for local consumption?

SINCE the censorship story broke, Wal-Mart’s PR flacks have been in damage-control mode. Although the retailer’s bins bulge with bleeped “fucks” and sanitized airbrushed covers that would be the envy of any Stalinist, the company’s corporate face is frozen in an expression of wounded innocence. There are no boastful statements on how they’ve muscled sleazeball singers into washing out their mouths with electronic soap.

Instead, the huge Arkansas-based retail chain founded by patriarch Sam Walton presents itself as a warm and fuzzy family-friendly company that stands for “traditional values.”

But the corporation is a bare-knuckled, sharp-elbowed competitor with a reputation for going into a community, engaging in predatory pricing, and leaving local storefronts empty. Wal-Mart denies using its corporate power to create an alternate market of bowdlerized CDs. In the official pronouncement posted on its Web site, the company states that it “does not alter CDs, albums, or other music that is offered in our stores.” (It’s a disingenuous statement; no one has accused non-manufacturer Wal-Mart of altering the discs itself.) Nor does the company feel it has any obligation to identify such altered discs for its customers.

“We do not talk to artists, we do not go to the recording industry and say you have to do a, b, and c for us to sell your product,” says Betsy Reithemeyer, a spokesperson at Wal-Mart headquarters in Arkansas. “If a manufacturer wants to sell their product in Wal-Mart, they have to meet certain standards. If a manufacturer chooses to place a warning label on their merchandise, we have to look at that and consider it. If they want to put two CDs out on the street–one with one set of lyrics and one with another, that is certainly their choice.”

According to Reithemeyer, it is the distributors and record companies that have the responsibility to identify product as altered, not the retailer.

The consumers, it seems, have the choice to trust Wal-Mart’s judgment, not to use their own. Wal-Mart’s denials aside, it’s counterintuitive–as one individual who works with both producers and retailers on free speech issues told me–to imagine that manufacturers would change their product without impetus from the retailers. And Wal-Mart is the most outspoken. As the retailers act to advance a conservative cultural agenda and protect record consumers from their own tastes, the music industry is running for cover.

“The most telling thing in that New York Times article is the dog that didn’t bark. There’s not a single record executive quoted,” says rock critic Dave Marsh. “In the wake of the Tucker-Lieberman thing, that’s how cowed they are.”

Publisher of the politically oriented newsletter Rock and Rap Confidential, Marsh is a stalwart opponent of censorship. He rejects even the parental warning stickers, pointing out that they result in the blacklisting of the CDs that carry them. He believes retailers have a civic obligation to make available a wide range of material, even–perhaps, especially–material that makes people uncomfortable.

“The point of the First Amendment is not to protect things everyone agrees on. It’s to protect things people don’t agree on,” Marsh argues. “If they’re eliminating what is controversial, they’re not being good citizens.

“This is not about protecting people. Wal-Mart sells guns, they sell junk food–how many carcinogens do you think they sell at Wal-Mart?” asks Marsh. “It’s about forcing people to think like Christians from Arkansas.”

Imagine if, instead of banning obscenity-prone rappers, a major national retail chain announced it would no longer carry Christian pop music. Not because it doesn’t sell–it sells big–but because it doesn’t comport with the values the retailer likes to think it shares with its customers. And, imagine further, that the store had a demonstrable, if unstated, policy of accepting those same recordings if all references to Jesus or God were expurgated.

Christian conservatives would be up in arms at attempts to pressure their brethren and sistren into denying their faith.

I didn’t get very upset a decade or so ago when Tipper Gore and the Parents Music Resource Center were pushing for warning stickers on records. What’s so bad about letting the consumer know what’s on a disc?, I thought. And even now, as the father of an 8-year-old son, I find the ratings on videos helpful in deciding which are appropriate for him to watch. But it has turned out that so-called alarmists such as Dave Marsh and the late Frank Zappa–the avant rocker who led the charge in the 1980s against the PMRC–were right. The warning labels are used to compile blacklists. And the surrender on the warning labels has just led to further surrenders, which has led to censored compact discs in the bins of Wal-Mart.

They look the same but they aren’t the same–they’re different by a factor of fear.

Censorship is easily recognizable when it’s practiced by the government. But this is censorship, too: It’s the attempt to impose the conservative values of Wal-Mart and Joe Lieberman on the public by denying access to cultural products that differ from those values. It is argument by suppression, intimidation, and–in Wal-Mart’s case–stealth.

It isn’t just Snoop Doggy Dogg who is being executed in the aisles of Wal-Mart. It is also the idea of an open and lively culture, one in which values are debated rather than imposed by authoritarian fiat, a culture in which the mainstream still has access to the margins and vice versa. Wal-Mart has a right to act as a cultural censor.

It’s just wrong to do so.

From the January 9-15, 1997 issue of the Sonoma County Independent