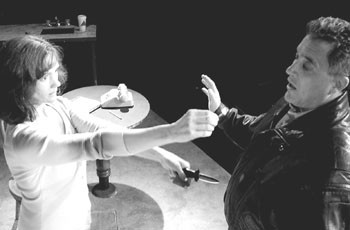 Hysterical Blindness: Rebecca Allington and Roy Jimenez battle it out in ‘Wait Until Dark.’

A blind woman fights for her life in ‘Wait Until Dark’

Everyone’s frightened of something,” croons a villain to his intended victim in Wait Until Dark, now on stage at Sonoma County Repertory Theatre. This 1960s thriller from playwright and screenwriter Frederick Knott taps into what has become one of Middle America’s greatest fears: what newscasters in these troubled times call a home invasion, the sudden collision of domestic tranquility and shocking violence.

In Wait Until Dark, hearth and home are represented by what seems to be an especially vulnerable specimen: Susy, a blind woman painfully ill at ease with her disability, especially with her husband out of town.

Of course, any classic movie buff worth his or her salt has seen the movie version of Knott’s play. The luminous Audrey Hepburn played the beleaguered blind woman opposite Alan Arkin’s scheming psychopath in that 1967 film, which climaxes in a truly terrifying battle of wits.

It’s no small matter to step into shoes once filled by Hepburn, but Rebecca Allington makes a good go of it in the role of Susy in this SCR production, which is directed by Jim dePriest.

On opening weekend, the actress got off to a rough start with a few fumbled lines. But after that warm-up period, Allington offered an effective performance. She’s physically convincing as a blind person feeling her way through an uncertain world, and she also nicely captures her character’s psychological transition from near helplessness to determined resourcefulness as she realizes she’s fighting for her life.

As the murderous Roat, Roy Jimenez is reasonably intimidating without quite reaching the level of chillingly scary. Rich Deike is smoothly convincing–apart from a few fumbled lines–as a charming con man who lays out a web of lies in an attempt to separate Susy from the stash. Gerald Haston plays the third bad guy, the burly Carlino, who seems frighteningly comfortable with his brass knuckles.

Fair warning: despite the generally competent acting, this play features a few dead spots that will test an audience’s patience. That problem arises because Knott forces his characters to recite acres of exposition to illuminate the story’s torturous set-up. Even the movie, which sports a heavyweight cast and good cinematography, is painfully slow for the first hour. But patient audience members can expect a payoff in the second act. As the action builds towards climax, Allington and Jimenez both get better and better, and there are scenes here that will raise some goose bumps.

Other scenes may raise yelps of indignation from an audience surprised by the play’s old-school take on the hot-button issues of gender and disability. For instance, in the brief time we see Susy’s husband (played here by Bob Thomas) on stage, he’s a condescending jerk.

Apparently the two met when he rescued the poor woman from disaster in a busy intersection, but now he contents himself with giving Susy elaborate instructions on how to defrost the icebox while he’s off photographing fashion models. Frankly, it makes one long for a sequel. The first title to come to mind? Wait Until You Have to Write My Alimony Check.