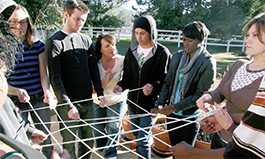 Most kids look forward to their 18th birthday, when they finally, legally, become adults. But for foster kids, it can be a nightmare.

At the stroke of midnight, they are abruptly no longer eligible for youth-based home and support systems and must instead navigate a dense patchwork of overburdened bureaucracies administering adult services from locations scattered across the county.

Little wonder that a third of California’s “aged out” foster youth wind up homeless within months, or that many develop substance-abuse problems and-or a rap sheet.

Into that void comes VOICES (Voice Our Independent Choices for Emancipation Support), an innovative one-stop, drop-in service model run by and for foster youth. The concept was championed by Leslie Medine, executive director of On the Move, an umbrella nonprofit for VOICES and other youth-leadership development projects. Four years ago, in a summit meeting with the heads of Napa County’s Probation, Child Welfare, Child Social Services and other agencies, she posed the key question: “Could we get the agencies to co-locate staff under our roof, so the kids won’t have to wander all over the place? And people said yes.”

VOICES opened in a funky, refurbished Victorian near downtown Napa in late 2005. “Nobody knew who we were,” recalls Mitch Findley, one of the program’s youth founders. “Nobody was understanding where we were coming from or what we were trying to do.

“That all changed as soon as we started serving the youth, because the youth were coming in, they were enjoying being there, they were getting their needs met, they were talking it up among other youth. So the word spread that we were doing good things.”

Now VOICES itself has spread, opening its second location near downtown Santa Rosa. In a tidy duplex just off College Avenue, the new center is staffed almost entirely by former foster youth and offers visitors a kitchen, laundry facilities, meeting rooms, computers and a growing array of informational resources, all at no charge.

“It really does make a difference when they come in and see young people,” Medine affirms. There are other significant differences, too. Instead of being asked to sit down and fill out an application, “we give them a tour and say, ‘Here are all the different things we do,'” she continues. “We’re not in a big hurry, and that’s really, really important.”

It took VOICES about a year to get established in Napa, but from the outset, Findley says, “It was our dream to have this thing expanded.”

Once it became clear to the surrounding world that their approach was working, “a lot of different counties started getting in touch with us. ‘Hey, we want to come check you out, can you come here? We want to have a presentation,'” Findley says.

But Sonoma County was not among those suitors until Laura Colgate, a board member of the Valley of the Moon Children’s Foundation, played matchmaker. The first conversations quickly led to a youth focus group last August. Five young people attended, Mitch recalls, and “four became founders.”

One of them is Cordero Lee, who now works as the office administrator for VOICES Sonoma. “We went through a whole lot of stuff,” says Lee of the period after his hire, “like getting our group dynamics together, working on each other’s personal skills, getting outreach to certain people, letting them know that VOICES is around.”

In its first month, the Santa Rosa VOICES recorded 47 youth visitors and provided services to 32, reports Findley, now the Sonoma site coordinator. In May, they had 117 visitors and served 53 of them. Those who visit “bring a friend next time,” he notes. “People talk.”

With major support from the Junior League of Napa-Sonoma and two family foundations, the new center launched with a $120,000 annual budget, barely enough to operate three days a week. Medine estimates that a full-time program will require more than three times that much, no small challenge in the current economic climate.

But success breeds support, and the new center is off to a strong start. “In terms of the programs they’re offering at this point, it’s incredibly successful,” says Zach Lawrence, a Social Advocates for Youth employment counselor who spends four hours each week co-located at VOICES Sonoma. “Should the volunteers and funding come through, it could grow and become a much bigger part of these kids’ lives.”

“Being able to expand into a new community is a huge success for us now,” Findley adds. “I almost thought sometimes that VOICES Napa was just maybe a fluke, or a miracle—the moons aligned and VOICES happened in Napa. But now, with the second VOICES, to be able say, ‘Hey look, we’re replicable. This is a model that works, and this is something that can happen in other communities.’ That’s a huge success.”