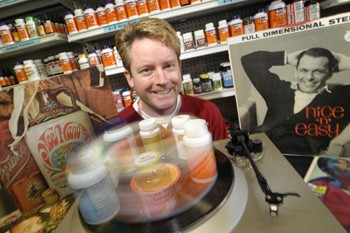 “I figured if I don’t, somebody else is going to have all the fun,” says Lieb, proprietor of Vitamin Planet, a vitamin store that recently spawned Vinyl Planet, a store-within-a-store selling used vinyl records.

“I wanted to be involved with music and have something in the store that had a fun factor,” he explains. As is appropriate in a vitamin shop, the “fun factor” comes in megadoses.

“It’s huge. People come in and talk about the vitamins–it’s a very serious thing, people dealing with their health–but when they see the records, they get a smile on their faces.”

Lieb found his groove last April, a year and a half after the town’s flagship vinyl purveyor, Red Devil Records, had left the block for presumably healthier climes in San Rafael. When Discovery Books, which also sold vinyl, shuttered its location last spring, Lieb decided to give his passion a spin.

“The day after they closed their doors, I put my first records on the shelf. Nobody [in Petaluma] is doing it except the thrift stores and some of the antique stores,” says Lieb. “If I don’t count all the hours that I put into it and my friends who help me, I think there’s a small profit there. I’m not relying on it as my sole source of income, but it helps with the cash flow so I can keep the vitamin shelves better stocked.”

Lieb is quick to point out that the cross-marketing of vitamins and vinyl did not begin with him. Corporate lore in the vitamin business has it that a major record chain was birthed in the aisles of a health enterprise.

“This is kind of pretentious for me to say, because I’m nothing, I’m like an antique-store section here,” says Lieb, “but a couple of sources have told me that the first Tower Records started out in the back of a small independent pharmacy in downtown Sacramento. That may have been 30 years ago or something–but there is precedent.”

In a “the turntables have turned” moment, colleagues in the trade told Lieb that Tower’s brass evidently once considered implementing vitamin kiosks in their stores. The idea apparently fizzled like a flat glass of Emergen-C, leaving Vitamin Planet, for the time being, as perhaps the only vitamin and record store in the world, or at least the North Bay. Moreover, it’s likely none but Lieb would sell such an ailing analog media as vinyl records. This accounts for Lieb’s own spin on the analog-vs.-digital debate: He doesn’t sell online. “I don’t save all the good stuff for some person I don’t know,” he says firmly.

Music has long been part of Lieb’s life. In the mid-’80s, he played guitar in the seminal punk band Trap-a-Poodle. He currently plays in rock outfit the Maltese Falcons, who sometimes rehearse in the storefront amidst the antioxidants and odd Beatles reissue.

“They’re never as organized as I want them to be–half the records don’t have prices on them,” Lieb admits. “Right now, I want to have as much diversity as possible to try to find out what people are really interested in buying as far as used records are concerned.

“It’s a win-win situation,” he continues. “The more I know about music, the more I’m able to get it to move. If I know hardly anything about what I’m selling, people think they can come in here and get a steal. Which they can! If they want to resell it on eBay and triple their money, I don’t care.”

In fact, regarding his used vinyl sideline, the only green Lieb concerns himself with is ecological in nature. “It’s kind of a green business–it’s all recycled.”