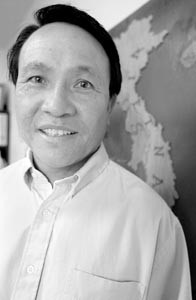 Twenty-five years after the fall of Saigon, the Vietnam War still lingers in the lives of three North Bay veterans

Hours later, North Vietnamese forces would be in control of the city, the last American military personnel would be evacuated, and the United States would suffer the most humiliating defeat in its history.

Twenty-five years later, the Vietnam War is still prevalent in the American psyche–though Hollywood no longer has much of a fascination with the topic. As a former prisoner of war, ex-fighter pilot-turned-U.S. Sen. John McCain recently made an unsuccessful bid to ride his warrior status to the White House. The specter of the Vietnam War cast a long shadow over last year’s NATO air campaign in Yugoslavia, causing a major policy shake-up at the Pentagon by military leaders who vowed never again to send American troops into combat without overriding force behind them (good news for U.S. soldiers; bad news for civilians killed in the intensive bombing raids).

Meanwhile, U.S. corporations, intent on promoting American business interests, are actively courting the Vietnamese. And Secretary of Defense William Cohen last month paid a visit to the Southeast Asian nation in a gesture of goodwill intended to help normalize relations–and send a warning to neighboring China.

Closer to home, hundreds of thousands of Vietnam veterans still suffer from the ravages of the war, which claimed the lives of 58,148 Americans. Of the 2.5 million men and women who served there, 300,000 were wounded, including 75,000 who suffered permanent disabilities. By some estimates, Vietnam vets compose one-third of the nation’s homeless–the Vietnam Veterans of America in Santa Rosa still hosts annual “stand-downs” in which homeless vets receive food, clothing, and counseling in the hopes of getting them off the streets. And the San Francisco-based organization Swords into Ploughshares is building a veterans’ service center in the former Presidio Army Base to provide transitional housing for homeless vets. “After all these years, it’s the last chance to get them to come out of the woods,” one activist said. One web site (www.suicide wall.com) suggests that between 20,000 and 200,000 Viet vets have committed suicide since the war; other studies claim that the suicide rate is lower than that among non-vets. And many veterans (and Vietnamese civilians) still contend with the debilitating effects of post-traumatic stress syndrome, or the symptoms of exposure to Agent Orange, the dioxin-based defoliant sprayed on Vietnam’s jungles to expose Communist forces.

Meanwhile, more than a million South Vietnamese fled the country. Many have acclimated to life in other nations, but interest in the war and its consequences runs high: a recent speech hosted by the Vietnam Speakers Alliance drew a standing-room-only crowd of 2,000 in Fairfield, including disabled South Vietnamese vets who received no governmental benefits after their nation surrendered to the Communist-led North.

Here are the stories of three North Bay residents who, 25 years later, discussed their experiences and their efforts to move on with their lives after the fall.

Lily Adams: Honoring the Dead and the Living Patrick McGregor: Still Haunted by the Past Vinh Luu: Letting Go