Demise of the lawn and the allure of 'Pepper #30' 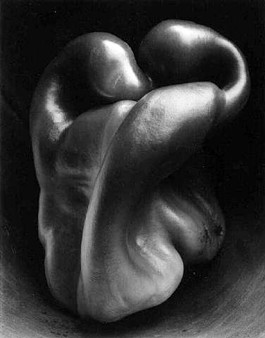 One of the most celebrated bell peppers in modern art—perhaps the most famous of all—is the one depicted in black and white by photographer Edward Weston in 1930. He often captured the curvaceous in nature, and focused his lens on many a good-looking piece of produce. But Pepper #30 outshines them all, with its stunning curves and suggestive twists. Upon first seeing Weston’s image on a postcard, my friend Kevin let out a surprised laugh and exclaimed, “That’s the most sensual-looking bell pepper I’ve ever seen!”

Weston’s pepper is transcendent, and both the artist and the far-reaching vegetable owe the magic of their collaboration to a home garden. Even with the most expensive Hasselblad camera in the world, that quality of art would rarely emerge from shooting pictures of a Safeway pepper. All the curves and personality have been bred out of them, the way the brains were bred out of collies to earn more beauty points at dog shows. But in a home garden with the right seeds, peppers are free to grow themselves as gardeners do—each moment offering the possibility of surprise, delight and the occasional alluring aberration.

I’m not certain whether Weston was the gardener in his home, but the family pepper he made famous was picked before this country became involved in World War II, before the suppression of home gardens. Just 13 years after Weston’s shutter clicked in front of that homegrown beauty, the Department of Agriculture tried to stop Eleanor Roosevelt from planting a White House garden intended to inspire citizens to grow food. Of course, everyone knows how Eleanor Roosevelt stood up to bullying; she was not deterred when they told her that home gardens would be a threat to the food industry. And we should not be deterred either, now that the food industry has become a threat to us.

When the war overseas ended, the war on the environment began with leftover combat chemicals. Agribusiness embraced pesticide dependence even as it coaxed our dependence on convenient, often tasteless veggies; it still guides our eating and controls our Department of Agriculture, which tried to block victory gardens. Science journalist Michael Pollan insists that practices of agribusiness weaken public health, environmental integrity and national security. Readers around the country are still responding to Pollan’s open letter to the new president, published Oct. 9 in the New York Times Magazine. In that letter (and elsewhere, including a PBS interview with Bill Moyers), Pollan calls for the appointment of a food czar in the White House, someone who will develop food policy for the people.

I was thrilled when Alice Waters and friends got San Francisco to replace lawn with lettuce at City Hall. Her goal is to get President Obama to taste a perfect peach, insisting that he will get the message that way, through not just the taste but also the care that nurtured the peach. Go, Alice! I am among the petition signers urging Obama to rip out the south lawn and plant veggies at the White House. I would consider it victory enough if organic, non-GMO vegetables grew there, anything not redesigned at UC Davis with food-industry grant money. Like Eleanor’s 1943 garden, the new White House garden would model empowerment, illustrating how a garden gives us back our food-growing rights, makes a home for honeybees and engages our bodies in meaningful work as it enlivens our senses.

Decades ago, in a conservative suburb of Santa Rosa, one mysterious family grew vegetables and flowers in their front yard. I secretly admired them, thereafter associating front-yard gardening with social courage and creativity. Now Los Angeles artist Fritz Haeg’s Edible Estates (www.fritzhaeg.com) are supplanting lawns here and abroad, and gardens are intertwined with courageous and fun social movements from Slow Food to community building. And don’t forget art. My first garden was a work of art inspired in part by Weston’s unforgettable pepper. Michael Pollan has inspired my next one. It’s a “victory over agribusiness” garden, and I’m planning to send Kevin photographs of all the sensual-looking vegetables.