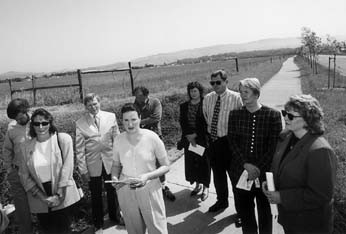 WHILE THE DEBATE simmers about whether urban growth boundaries curb sprawl and allow a community to retain its charm, or whether UGBs unfairly hinder economic development by placing a blanket restriction over expansion, local voters could encounter three distinct growth-curbing measures on upcoming ballots.

In one of those instances, a new UGB has sparked allegations that Rohnert Park officials and local developers are teaming up to steamroll growth limits adopted two years ago. In 1996, Rohnert Park, Sebastopol, Healdsburg, and Santa Rosa gave the nod to UGBs, and voters countywide agreed to a measure that requires the county to respect municipal UGBs. The latter three cities adopted the first voter-approved, 20-year urban boundary initiatives in the United States; Rohnert Park’s UGB was supposed to stand for four years.

Now that sprawling suburb is the first city in the nation to face what critics say is “a cynical” challenge to the law by development interests.

The newly proposed UGB that has found its way onto the June 2 ballot in Rohnert Park–Measure A–raised the hackles of some environmentalists. Greenbelt Alliance representatives claim that the new measure actually will repeal the earlier voter-approved UGB and contains a loophole that gives the City Council authority to expand the boundaries of the growth limit without voter approval.

Greenbelt Alliance’s North Bay field director Christa Shaw, who works for the non-profit Bay Area conservation group that has spearheaded or supported every UGB measure in Northern California, warns that Measure A is a sham that ultimately will benefit big developers. “Other cities that have passed UGBs carefully constructed exceptions to make sure they could provide state-mandated low-income housing,” she explains. “On the other hand, [because of a loophole in the resolution] Rohnert Park’s City Council can expand the boundary without voter approval for any kind of housing. It’s really misleading, and it gives people a blueprint on how to destroy every other UGB.”

Others agree. “Other cities passed UGBs after a lot of public input. Here in Rohnert Park, the City Council majority is putting the cart before the horse,” says Rohnert Park City Councilman Jake Mackenzie, one of the council minority that opposes Measure A and has formed a group called Citizens United for Urban Boundaries, or CURB.

“The real plan is to increase the population of Rohnert Park by 13,000 over the next 20 years, which would require about 5,000 more houses,” he contends.

He recalls that the Rohnert Park council members who are pushing Measure A were adamantly against UGBs 18 months ago. “It’s an amazing conversion to this religion,” Mackenzie dryly observes. Rohnert Park City Councilman Armando Flores, who sponsored the ballot initiative, did not return calls for comment this week, but he has publicly stated that the measure is intended simply to encourage economic vitality and provide space for population growth.

This does not bode well, according to some community leaders and elected officials, who last month gathered to voice their concerns at the edge of a grassy Rohnert Park field, that is slated for development should Measure A pass. “Voters in Sonoma County have stated clearly and repeatedly that they want to control growth,” said Leah Gold, chairperson of the Healdsburg Urban/Rural Boundaries Committee, as she gazed at the pastoral backdrop of undulating hills. “[Measure A] is a cynical attempt to confuse voters.”

UGB INITIATIVES are riding a wave of popularity locally. In January, 72 percent of Windsor voters passed a 20-year growth measure, making it the largest such vote getter in the county to date. “Windsor was the fastest-growing community in the county,” says Windsor City Councilwoman Lynn Morehouse. “Voters told us to slow down.”

While Greenbelt Alliance’s Shaw says it is still too new to show immediate impact, she is very optimistic about the Windsor measure. “The UGB will give Windsor room to grow, but not to jump over boundaries,” she says.

This public acceptance of the county’s first urban boundaries is inspiring conservationists to wage a continuing fight for slow growth. “This is a big deal,” says Shaw. “It’s why we’re fighting Measure A. We demand high standards for UGBs. We’d like to think we’ll get a real urban growth boundary measure on the ballot for Rohnert Park by November [if Measure A fails in June]. If Measure A passes, we’ll still work to overturn it, but probably not in November.”

Meanwhile, the trend is accelerating. With a new environmentally friendly city council majority, Petaluma–Sonoma County’s second-largest city–is busy drafting a growth measure for the November ballot. Mark Green, director of the Sonoma County Conservation Action Committee, has been canvassing the sprawling riverfront city. He says the majority of Petalumans favor such a moratorium.

“Our field staff walked two thirds of the city and found an overwhelming support for UGBs,” Green says. “The only negative feedback we got was that it should have happened a long time ago. [The idea of] urban growth boundaries is not difficult to communicate or get people to buy into.”

“If the council takes action and gets the necessary support from planning to draw this up, we could qualify for the November ballot,” he says. “We’ve all longed for a strong UGB around the city of Cotati contingent on completion of the general plan.”

‘The View from Spring to Autumn’