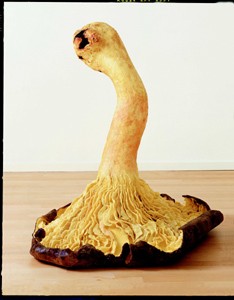 Fungus Among Us: Michelle Segre’s ‘Untitled.’

That which we admire about nature we tend to emulate, placing slick sprays of silk flowers in living rooms and having plastic pine trees preside over holiday bowers. Stressed-out New Age audiophiles listen to natural sounds to help reconnect themselves with Gaia, letting the measured beat of ocean waves or the steady shimmer of rainfall lull them into relaxation.

At a new traveling exhibition titled “UnNaturally,” running April 30-Aug. 16 at the COPIA center, artist Iñigo Manglano-Ovalle also produces such soothing sounds for weary museum-goers. Mimicking the popular ambient soundtracks of the irony-starved, Manglano-Ovalle uses a gunshot, recorded accidentally when a shooting occurred near his Chicago apartment, pixilates the tremor and manipulates the deathly sonics so that they sound like the full comforting roll of a distant thunderstorm.

Such intelligent manipulation is at the centerpiece of “UnNaturally.” Conceived and amassed by independent curator Mary-Kay Lombino, the curator of exhibitions at California State University Long Beach, “UnNaturally” consists of 55 works by 15 different artists, all of which examine the way humans strive to co-opt, control and usurp nature, with varying results. Observing the film industry’s perfection of fakery and our society’s bent towards Disney-like tamings of the natural world, “UnNaturally” presents new and improved projections of nature, hoping to prompt the viewer to question the result.

“Why perfect what’s already perfect?” Lombino rhetorically asks, speaking by phone from her university office. “There is a way to perfect nature even though it’s so beautiful and brings us so much joy. But, we have a love/hate relationship with it. We love nature, but we build structures around ourselves to keep our selves safe from it. We want it packaged and almost sanitized and would like to be able to discard it when it’s inconvenient. We’d actually,” her voice almost lowers to a whisper, “prefer a new and improved nature that doesn’t have any unpredictability.”

Lombino’s lowered tones are appropriate, because that’s a shocking statement to make, one that is subscribed to the minute an air conditioner is turned on or a raindrop is cursed.

Lombino very self-consciously chooses not to include painting and drawing as media in the exhibit, citing nature’s ancient history in inspiring representations of itself onto paper and canvas as being “too enormous.” Rather than representations, the works collected in “UnNaturally” emerge as brand-new artifacts.

In Michelle Segre’s mushroom sculpture Untitled, which stands over 5 feet tall and takes on mythic proportions with its overgrown size, each natural feature of a mushroom has been faithfully overblown up. Similarly, sculptor Roxy Paine uses steel, epoxy and plastic to minutely emulate fungus and other botanicals, placing them exactly in appropriate habitats or containers. Creepy yet beautiful, these manmade replicas intend to challenge the viewer to consider the surrogate role that humans have assigned the natural world.

In considering the triumph of human ownership, photographer Marc Quinn has encased his subjects for eternity. For his Garden series of prints, Quinn immersed exotic tropical plants in an aquarium filled with silicone. The plants remain looking wildly vibrant and alive but actually couldn’t be more suffocated and entombed.

Writing in the catalogue accompanying the exhibit, Lombino notes, “The works in the exhibition comprise a many-voiced commentary on the complex issue of real versus fake and an inquiry into the ways in which popular culture has become a major criterion in comparing the two.”

By phone she assures that “UnNaturally” has wider appeal than such scholarly language might suppose. “The exhibit has layers of appreciation: you can just walk in and look at it–because it’s really quite beautiful–or you can really get into the nitty-gritty.”