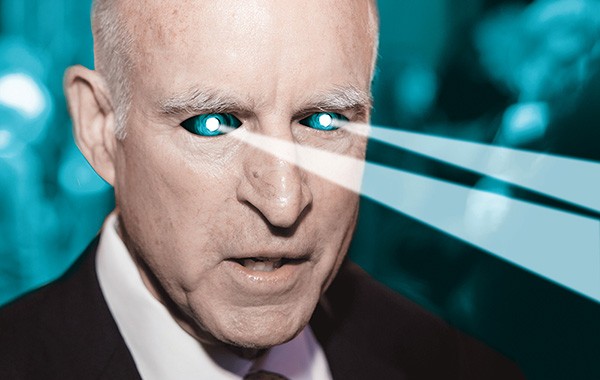 Proposition 1 and Jerry Brown's pipe dreams for the Delta

Barbara Barrigan-Parrilla, executive director of the organization Restore the Delta, scoffed at a declaration made by Gov. Jerry Brown in the days after the South Napa Earthquake. He told KGO radio that the 6.0 quake was nothing compared to what scientists say is in store for Californians. He said global warming and the threat of the Big One should motivate wary citizens to support his twin Delta Tunnels, part of Brown’s ambitious, $25 billion Bay Delta Conservation Plan.

“That’s a continuation of the Brown propaganda machine for the Delta Tunnels,” Barrigan-Parrilla says with a sharp, short laugh.

Whoa, governor. State legislators have already said no to the plan, at least for now, stripping it out of a historic $7.5 billion water bond headed for the ballot in November as Proposition 1.

In the grips of the drought, Sacramento lawmakers came to an almost unanimous agreement on the wisdom of the water bond. Along the way to passage in the Legislature, the Water Quality, Supply and Infrastructure Improvement Act of 2014 went from “tunnel-neutral” to tunnel-wary in the final language signed by Gov. Brown.

That’s not stopping Brown from chasing his Delta twin-pipe dream, as he pursues a legacy project comprising two 40-foot-wide, 30-mile-long tunnels built under the Sacramento River-San Joaquin Delta that would ferry water to parched Big Ag valleys and water districts to the south.

Brown’s post-temblor comment had a whiff of the “shock doctrine” to it—a term coined by writer and activist Naomi Klein that refers to the use of a natural or man-made disaster to promote “disaster capitalism,” projects otherwise unpopular with the public; e.g., the invasion of Iraq or the destruction of the public school system in New Orleans after Hurricane Katrina.

The governor has been pitching the tunnels at public events and in speeches throughout the year, says chief spokesman Evan Westrup.

“The governor has been sounding this same alarm for the better part of two years, from the news conference where he announced his [tunnel] proposal in 2012 to a radio interview less than a month before the Napa earthquake,” says Westrup via email. “This is hardly a new warning, but in light of recent events, it seems a few more Californians are listening.”

If they are, it’s too late for any legislative motion on the tunnel front this year.

Indeed, voters’ wariness over the tunnels translated into a legislative fatwa on the subject in the final bond language that emerged in legislative negotiations. Voters will decide its fate in November when they vote on Proposition 1, but they won’t be voting on the tunnels or other parts of the Delta-conservation plan.

All of that was scrubbed by July, when the Legislature passed a
$7.5 billion bond with overwhelming support—and no money for the tunnels.

The road to Proposition 1 started in 2009, with a proposed $11 billion bond that stalled over high pork content after passing the Assembly. Some of the pork was tunnel funds that proved difficult to remove. When lawmakers took up the bond again this year, they still had to grapple with Brown’s tunnel scrapple.

State Assemblyman Marc Levine, D-San Rafael, says that an earlier version of the renegotiated and putatively pork-free bond this year still had some “wiggle room” to spend money on tunnel-related activities. He recalls that environmentalists told him they would be “OK if the bond was tunnel-neutral, because there’s a lot of good stuff in there.”

Nor for other lawmakers. Now the language specifically says “you can’t use the money at all for the tunnels,” says Levine. The bond language also forbids eminent domain acquisitions and any planning for “Delta conveyance facilities,” a fancy way of saying “tunnels.”

The Legislature passed the bond bill with only two no votes, from North Coast Assemblyman Wes Chesbro and Tea Partier Tim Donnelly. The former, an outgoing Democrat who is termed-out as of November, said $2 billion for new dams was too much for him—and the bond overall didn’t “create” any new water. Donnelly said that, except for the new dams, the bond was a waste of taxpayer money.

The urgency of the endless drought pushed lawmakers this year to find a palatable bond. It will add $7.1 billion in new debt to California, and also repurposes other unspent bond money from previous, water-focused initiatives to bring it to $7.5 billion.

Levine is hopeful about a hypothesis he’s come up with: If voters support it this fall, the aggregate effects of the bond and a new statewide groundwater management law will eliminate the underlying rationale for Brown’s tunnels, which is to keep water flowing to Big Ag and water districts down south.

Levine didn’t have specifics and said it was too early to say, but the bond would emphasize resource management and enhanced efficiencies in water usage as a way to beat the drought without resorting to draconian conveyance measures.

The two initiatives together add up to an pivotal moment in California water politics: The groundwater management law sets the stage for state oversight of local water districts—and the bond helps municipalities better manage their water district.

The groundwater law (see “Of Water and Wine,” July 23) requires that localities develop water-basin sustainability plans with the assistance of, and approval from, the state. Or else. Pump stations would be state-monitored and subject to takeover for water-use violations.

Levine says the combined legislative package represents the most significant California water-use reform in a century, but he opposes the tunnels out of environmental concerns for the Delta and its fisheries.

But Proposition 1 could be put to good use in the North Bay.

“Water districts and nonprofits would make a pitch to the Department of Water Resources,” says department of spokeswoman Nancy Vogel, cautioning that “there’s always more proposals than actual money.”

The bond would send millions to programs and initiatives that promote safe drinking water, wastewater treatment and watershed restoration projects. There’s $200 million to enhance stream-flow projects, $900 million for groundwater sustainability projects and other pots of money of potential benefit to the North Bay, says Vogel.

Local organizations and water districts would compete for a share of the bond, based on need and their compliance with the 2009 Water Act, which requires municipalities to come up with water-management plans or face state sanction. And, says Vogel, the North Coast is eligible for part of the $2.7 billion big-ticket bond item for water storage.

“That was the great debate in the Legislature,” says Vogel. “Dams and reservoirs. But groundwater is storage as well—and that $2.7 billion can be used to improve groundwater storage.”

Levine says the bond is a “huge win environmentally,” and highlights the millions dedicated to enhanced stream flows, of special benefit to hammered North Bay fisheries. “Two hundred million dollars is not enough, but it is a significant sum that can provide a great benefit,” he says, adding that the bond was supported by the two biggest fish organizations in the state: Trout Unlimited and California Trout.

Meanwhile, Brown is moving ahead with his project.

After an eight-month public comment period that ended in July, the Department of Water Resources is reviewing thousands of public comments to a draft environmental study and review, and has unspecified plans to adjust the overall Delta-restoration project based on those public comments.

“That plan is very much moving forward,” says Vogel. “Those comments and other things we’ve been hearing all along from the public make it clear that we need to go out and recirculate the plan again for public review. There will be changes, to the plans based on [environmental studies].”

Absent the tunnels, Brown warned, the Big One could bring with it a perilous mixing of fresh and seawater—disastrous to Big Ag and big city water authorities that rely on the Sacramento flow.

Brown’s plan has scores of opponents throughout the state—particularly in the Delta, where concerns are more about strengthening the levee system for the half-million-odd residents who live in the area. They say the bond doesn’t go far enough, even as it offers $300 million for levee restoration.

Barrigan-Parrilla says that in the event of a Big One with an epicenter in the Delta, residents there would face “100 percent of the loss of life, and 80 percent of the economic losses. The tunnels wouldn’t do anything about that.”

In a fact sheet, the organization notes the “shock doctrine” aspect of Brown’s tunnel plan: “Powerful water interests control California’s water resources and the message about the state’s water. Since the devastation of Hurricane Katrina, these powerful forces have stoked fear of flooding and earthquakes to make a case for transforming a unique, beautiful and productive Delta region into a permanent way station for water going somewhere else.”

The anti-Brown right-wing blogosphere took note of Brown’s post-earthquake tunnel pronouncement with a spin of its own. The lads at the high-profile, right-leaning breitbart.com wondered at the wisdom of building underground tunnels in the high-seismic activity zone, and of course compared Brown’s plan with Red China’s massive Three Gorges Dam project.

The issue is not so much whether the tunnels would be impervious to earthquakes. Two months before the quake, a panel of engineers assured the public that the tunnels would be built to specifications far beyond the maximum predicted strength of whatever Big One is on its way.

The Delta Tunnels are part of Brown’s broader Bay Delta Conservation Plan, which also highlights habitat restoration as a key goal. For Delta residents, the issues are the levees and what they say are Brown’s indifference to their concerns.

“We have never lost a levee in the Delta due to earthquakes,” says Barrigan-Parrilla, who opposes Proposition 1. “The governor is putting habitat restoration above humanity when it comes to Delta residents,” she says.

“The levees are in better shape than ever,” she says, “but they should spend money on reinforcing some of them—there are a couple of hundred miles of levees that should be brought up to the highest standard. The funding in the water bond doesn’t bring them to the highest possible standard.”

Vogel says that levee restoration is part of an ongoing priority for the governor. “The state has steadily invested in Delta levees,” she says. “Whether the [Bay Delta Conservation Plan] is implemented or not, that investment is needed. We’re not going to walk away from the Delta and the need to invest in the Delta this year.”

Vogel also defends the proposed tunnel-fund. Sixty-eight percent of the tab, she says, would be paid for by the public water districts that buy water. “They will pay the bulk of the costs of it,” says Vogel. How those costs are then parlayed to ratepayers remains to be seen, but Vogel noted that boards of directors of the various water districts are in ongoing discussions about the plan.

“The habitat conservation costs would be picked up by the state as a whole, and that goes toward endangered and threatened species,” she adds.

Vogel would not provide details on possible changes to the tunnel plan. “That remains to be seen,” she says, and says only that the “general categories are impacts to Delta residents and water quality. We’re looking hard at the comments and at the plan and looking at ways to improve it.”

As for the bond act’s excision of tunnel funds? “We don’t need those funds in this water bond. We assume there will be money down the road,” she adds. “Maybe another bond.”

Maybe not, says Levine: “Let’s lay the foundation for solving our water problems in a way that allows us to break away from the rigid thinking of the Governor’s tunnel vision.”