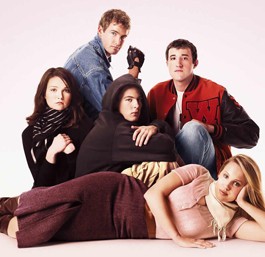 At first, the glossy feel of Nanette Burstein’s documentary American Teen makes one think that maybe it’s all false or faked, like a slightly more realistic, Midwestern version of The O.C. But it doesn’t take long to realize that these kids are just awkward and goofy-looking enough that they must be real.

Documentary purists might decry the film’s mainstream style as an attempt at cashing in on a larger audience, and there is clearly an influence from superficial reality TV shows and the endless stream of unscripted specials on MTV such as Made, True Life and the truly dreadful My Super Sweet Sixteen. But Burstein (The Kid Stays in the Picture) takes the best of what’s in vogue in reality programming today and marries it with a larger cinematic canvas to create something that is more accessible than either one could be alone. This style might be too slick for some, but it helps the film to connect with its audience.

The subjects of the film are four very different high school seniors, all living in Warsaw, Ind., and attending the town’s only high school. Leading the way—and the school—is super popular Megan Krizmanich, a drama-prone and often vindictive “princess” who struggles to bury her mounting anxiety about following in her family’s footsteps by gaining admission to Notre Dame.

On the opposite end of the social spectrum is the hopelessly geeky Jake Tusing, hell-bent on getting himself a girlfriend before he graduates. Somewhere in between is nice-guy basketball star Colin Clemens, feeling the stress to perform well enough on the court to earn a scholarship for college (the only way he can afford to go). Last up is the rebellious and nonconformist Hannah Bailey, who wants nothing more than to survive her senior year so she can get the heck out of Indiana.

The teens all have a surprising openness around the camera, something else that is no doubt assisted by the film’s timely placement in reality television’s evolution. Unloading your deepest emotions and baggage to a cameraman probably feels a lot more natural to a teenager than it would have even 10 years ago. And as opposed to the mind-numbing series that have long since replaced music videos on MTV, there is no vicarious wish fulfillment for audiences who long to throw lavish birthday parties, undergo unrealistic transformations or even just be the center of attention for five months straight. American Teen opts instead to show it all—the good, the bad and the ugly of the teenage experience.

Each subject runs the gamut from happy moments of triumph to sad experiences of defeat. If American Teen conveys nothing else about the life of a teen in America, it truly illustrates the tremendous pressure that kids are under. It comes at them from all sides; there’s the pressure to succeed, the peer pressure to fall in line with their clique, the pressure from their parents and the surprisingly dominant pressure they put on themselves.

Paramount Vantage, the studio that picked up the film after its buzzed-about debut at the Sundance Film Festival earlier this year, has chosen a curious marketing tactic for American Teen that involves linking it to seminal ’80s teen-angst classic The Breakfast Club. This is both an apt and misleading comparison. Unlike John Hughes’ film, the subjects never really spend any time together, and some of the corresponding characters fit better than others.

Hannah’s outcast persona is indeed eerily similar to Ally Sheedy’s Allison, and it is hard not to think of Molly Ringwald while watching Megan. But Jake is a completely different kind of geek than Anthony Michael Hall portrayed, and while Colin shares a similar set of problems with Emilio Estevez’s Andy Clark, he is a lot friendlier and easy-going than his fictional counterpart. And the “rebel heartthrob” of the documentary, Mitch Reinholdt, is hardly in the film at all and isn’t anything close to the badass that Judd Nelson’s John Bender was (or even the real Nelson for that matter).

But what American Teen and The Breakfast Club share is how they manage to humanize these stereotypes. Audiences will see there is more to the jock, the popular girl, the geek and the outcast than meets the eye. What (and when) Burstein chooses to show manipulates viewers to some extent, but nonetheless this is reality in all its real glory. We see what goes into creating these kids’ personalities, and, more interestingly, it’s not what we expected.