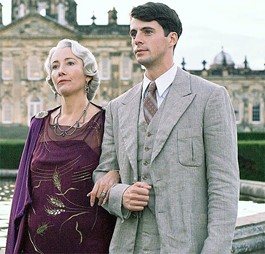 This revisionist version of Brideshead Revisited stars one original cast member from the 1981 BBC series. Welcome back to that ageless star: Yorkshire’s Castle Howard reprises its performance as Brideshead. There’s a segment of the audience that was just planning to go and gawk at the gardens, anyway.

The coffee-table movie crowd may not be disturbed by the weird and humorless approach by director Julian Jarrold, who is coming off the far superior Becoming Jane. In Evelyn Waugh’s strangely prestigious novel—so deft, so witty, so irritating—the closeted love balances the overpowering snobbery. The film begins during World War II, as British soldiers are based at a vacant country manor. In flashback, the noted artist Charles Ryder (Matthew Goode) recalls the beautiful and damned Flyte family that lived there during the 1920s and 1930s.

But Brideshead Revisited isn’t really about Ryder anymore than the similar but superior The Great Gatsby is about Nick Carraway. Making Ryder’s social climbing explicit is as bad as Jarrold’s other bad idea: to make pale, frail Sebastian Flyte (Ben Whishaw) declare his love with a kiss . . . or to pose him as if he were a shaven-headed AIDS sufferer during his time as a remittance man in the Arab world. The heterosexual love story between Ryder and Julia Flyte (Hayley Atwell) has zero chemistry—was that deliberate, too? There’s not much chemistry in the love between God and these aristos, either.

The busy, badly composed Oxford scenes and the smog-capped excursion to Venice to visit Lord Marchmain (Michael Gambon) aren’t as swoon-worthy as they ought to be. As Lord Marchmain’s Italian mistress, Greta Scacchi calms the more easygoing Catholics in the audience. Her Cara is boggled, just as any Mediterranean might be, by the Flytes’ conception of God. Emma Thompson gets to be the villainess. Lady Marchmain, a gentle Madonna in the book, is here an iron-willed, silver-haired matron. Thompson supposedly threatened to quit this picture when there was pressure on Atwell to lose weight. This story tells us that Thompson is a good, loyal person. It also highlights the problematic casting: Atwell is a statuesque woman, and she looks like an anachronism in her art deco sheaths and Jazz Age cloche hats.

Trying to be progressive, Jarrold takes a 180-degree turn on the book’s finale, which endorses an ultra-Catholicism that may never have existed anywhere outside the round of Waugh’s skull. We’re accustomed to hearing horrible stories that some devout person believes are beautiful. (The gist of these legends is usually that human beings can take a lot of suffering without complaint.) On one level, then, I appreciate Jarrold’s radical approach to the novel’s ending: the staging of the death of Lord Marchmain as horror, rather than the gentle beckoning of the Infinite. It’s not what the attending priest elsewhere describes as “a beautiful death.” But this new enlightened angle isn’t Waugh at all. And it’s very odd to see Brideshead turned into Castle Dracula with crucifixes.