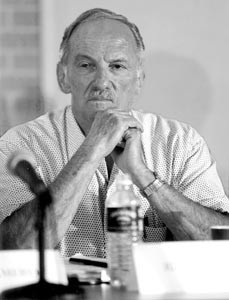 IF DIVIDE-and-conquer is one strategy of victory, Sonoma County’s pro-development community might benefit greatly from a split in the environmental community over November ballot measures to raise $811 million in sales taxes for local highway expansion and public transportation.

Most of the time, Sonoma County environmentalists and the business community occupy opposite sides of the table. But in this case, after eight years and 1,000 meetings, a substantial number of high-profile local environmentalists have signed on–along with business leaders–in support of a compromise plan that would increase the county’s sales tax 1/2 cent on the dollar over the next 20 years to pay for transit projects that other environmentalists now say would be “a tragedy in the making.”

The business community didn’t have to do much to instigate this fracture among the greens, a community that is as diverse as Sonoma County itself, with a wide range of issues, viewpoints, and agendas. The rift is pitting Sonoma County Conservation Action, the county’s largest environmental group and a proponent of the tax measures, against the 1,200 local members of the influential Environmental Defense Fund, a New York-based organization that opposes the sales tax.

Measure B, an advisory “wish-list” of transportation projects, and Measure C, a 20-year, 1/2-cent increase in the county’s sales tax, are “divisive on a couple of levels,” says Greenbelt Alliance North Bay field representative Chris Brown, whose organization is neutral on the Sonoma County tax measures.

“If it was just money for highways, environmentalists would be against it, I’d guarantee it,” Brown says. “But there are some good elements–bike paths, rail, other environmentally friendly forms of transit that are appealing to some environmentalists. But with these good features, it’s still a lot of money for widening roads, which encourages people to use cars.”

A polarized environmental community was on view last week at a transit tax forum with longtime environmental activists sitting on opposite sides of the dais during a panel discussion at the Santa Rosa Public Library.

The discussion was moderated by the Sierra Club, which has taken no official position on the two ballot measures. The non-binding Measure B gives no dollar amounts, but, according to Sierra Club figures, the wish-list would spend $564 million in new sales tax revenues over 20 years, allocating $228 million for widening the highway, $130 million for rail between Healdsburg and San Rafael, $97 million for local road improvements, $66 million for bike paths, pedestrian trails, and buses, $37 million for improvements to Highway 116, and $6 million for administration.

A separate Marin County ballot measure would raise an additional $300 million for a series of transit projects, including an extension of a proposed commute rail line from Willits to Larkspur.

Oddly enough, the outcome of both sides’ arguments is that either way voters will be giving in to the evil reign of the automobile, which, most agree, is at the root of Northern California’s air, traffic, and land-use problems. Proponents warned that a “no” vote will trash any chance of getting funds for rail, thus eliminating a major public transit option. Opponents cautioned that a “yes” vote will commit far too much money to a wider freeway, thus encouraging more car travel.

The 80 audience members clapped and cheered at most anti-car comments, but revealed during a show of hands that only three people had taken the bus that day, and only 10 sometime during the week. Morning commute patterns in Sonoma County show about 13 percent of people on public transit, 12 percent in car pools, and a whopping 75 percent driving alone in their cars.

“Sonoma County was developed around the automobile, but it can’t go on that way,” says Bill Kortum, chairman of Sonoma County Conservation Action, which has endorsed the measures. Kortum–regarded as the dean of the local green community–started working on a compromise solution after the 1990 defeat of similar transit measures in Marin and Sonoma counties that didn’t spell out how the money would be used.

“My effort is to use transportation as a mechanism to change the way we do business in this county. To change the pattern of the way we develop, away from sprawl,” he says. “How do you do that? You’ve got to have developers who are much more ingenious, who offer pedestrian and transit-oriented development.”

Kortum readily admits that rail, which naysayers have labeled “the train to nowhere,” would attract almost laughably low use–at first. “The rail would be the first in the nation with a suburban-to-suburban destination, and a fairly small number will ride it, but the beauty is that you build it as you need it,” he says.

Kortum cites consultant Peter Calthorpe’s recent study on Sonoma County transportation needs, upon which the transit plan is based. It states that 64 percent of all new jobs in Sonoma and Marin counties will be located less than a mile from train depots in Marin and Sonoma counties and could be served by rail.

“There is enough money to get the tracks up. We buy more as the demand is there, as people recognize that a transit-oriented lifestyle is much more preferable to getting stuck in traffic every day,” Kortum says. “My motivation is to have the public invest in that rail corridor, buses, and bike paths. We had to buy into the highway on this in order to get rail.”

Sierra Club member Don Sanders agrees: “People are deeply frustrated by congestion on Highway 101, and they want it fixed, even those who consider themselves environmentalists,” he says. Sanders calls Measures B and C an “imperfect solution, but necess-ary. Killing these measures inevitably will kill our chances for alterna-tive transportation measures in this county. People want the highway widened. If we don’t pass these measures in this election, demand will come back focused exclusively on more lanes.”

OPPONENTS of the measures say the specter of political blackmail isn’t worth settling for a system that will only make the county’s transport-ation problems worse.

“I don’t agree with my fellow environmentalists that we have to make this compromise,” says retired Windsor resident Richard Gaines, who served on the National Air Conservation Commission in the early 1970s and is part of the Campaign Against Wasting Millions. That group emerged two weeks ago. Gaines has several gripes with the measures: The rail system proposed is too slow and provides too few trains for efficient commuting; the freeway widening requires 10 million tons of gravel taken out of the Russian River, which will undermine the county’s drinking-water filtration system; and widening the freeway won’t alleviate traffic.

“The Calthorpe Report says that the project will result in a 10 percent reduction in delays in the morning commute. This means nine minutes [of waiting] instead of 10 for nearly $1 billion,” Gaines says. “We can’t build our way out of the traffic mess. What if we took the money we spend on roads and spent it on a rail system? Our problem is we don’t see ahead to the future.”

Many environmentalists would like to see no new lanes on any freeway, in step with the Sierra Club’s national transportation policy. But if highway expansion is inevitable, owing to political pressure or popular vote, user fees such as toll lanes or a gas tax would be the preferred way of getting people out of their cars.

“Sales taxes artificially lower the cost of driving. You pay when you buy diapers or shoes,” says panelist Michael Cameron of the Environmental Defense Fund.

“It hides the cost of the road from the person using it, so basically it encourages driving,” says Dan Kirshner, senior economic analyst for EDF. “Say it’s reasonable to charge higher sales tax for driving free. Why don’t we do that for movies? Do you think there would be longer lines if movies were free?

“Why do people drive so much? Because no one has to pay for it,” Kirshner adds. “We’re not anti-car. We’re just thinking that simple economics ought to apply to cars like everything else. A gas tax is a step in the right direction. At least when you drive more, it then would cost more.”

The fractured environmental community is mirrored by the board of the Greenbelt Alliance, a conservation group that has been in the forefront focusing on open-space issues in the county. Although former field representative Christa Shaw spent countless hours helping draft the measures that tried to balance environmental and development interests, several board members are adamantly against widening freeways, no matter what the peripheral benefits.

The group is remaining neutral on Sonoma County’s measures, with the idea that somebody will have to be around after the election to bring the environmental community back together.

“Staying neutral does give us the opportunity after the election to play peacemaker,” Chris Brown says. “We can walk through the minefield without offending anybody and get people talking again.”