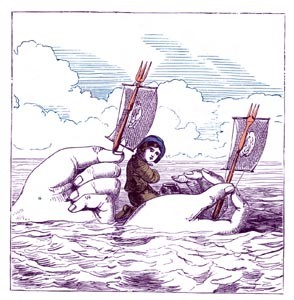 We live approximately five blocks from a Trader Joe’s, and it’s changed our lives.

Sometimes I try to recall what we ate before Trader Joe’s moved into the neighborhood, but it’s mostly a fuzzy blur of fresh vegetables and dry goods bought in bulk at the natural-foods store. How did one store tighten its grip on us so?

Once upon a time, there were no Trader Joe’s. People shopped at huge supermarkets where the shelves were filled with nationally recognized brands. Trader Joe’s itself, which is now known as the place to find mock gourmet foods and drinkable but value-priced wine, began its life in 1958 as an L.A.-based chain of convenience stores called Pronto Market. In 1967, founder Joe Coulombe (the original Trader) responded to competition from a nearby 7-11 by increasing floor space and diversifying his stock to feature specialty foods and imported and domestic wines at affordable prices. He outfitted the staff in Hawaiian shirts, put up vaguely nautical decorations, and dubbed store managers “Captains” and assistant store managers “First Mates.”

Such signature elements are still very much in place, but in the ensuing years Trader Joe’s has swelled to over 200 locations in 19 states. It keeps prices low by offering mostly house-branded products, occasionally in limited supply. In exchange for decidedly unflashy packaging and ever changing offerings, customers get variety and unbeatable prices. On top of that, a decent amount of Trader Joe’s products are organic and a few degrees more environmentally friendly than their big-brand counterparts. Often there will be noticeably fewer preservatives and less sodium and fat in Trader Joe’s items as well. While the stores are usually crammed with customers, the “crew members” tend to be friendly and abundantly present.

But those of you in the cult of Trader Joe’s already know this. So fervent are Trader Joe’s customers in their devotion that they’ve developed a nickname for the place: TJ’s. So far, I’ve not slipped into this habit, despite my thrice-weekly visits to the our local outpost, which is only a 10-minute walk from our house, thereby saving me the cutthroat parking showdowns guaranteed at any Trader Joe’s location, and thus tightening my devotion.

It wasn’t always this way. At first, the better half and I made bimonthly pilgrimages to Trader Joe’s to stock up on canned beans, imported jam, and one-pound blocks of butter–the quality and cost of basic dairy products at Trader Joe’s is unbeatable. Sadly, though, there are many household staples that they don’t carry, such as standard granulated sugar or dishwashing sponges; we’d get those at regular grocery stores.

Eventually, though, that faded. While the walk to Trader Joe’s is a pleasant jaunt, the drive to Safeway threads through congested streets. And the carts at Safeway are huge–are shopping carts growing in proportion to the spread of our nation’s increasingly obese asses? In any case, Trader Joe’s seduced us with its close proximity and lack of a club card; instead of seeking items that Trader Joe’s does not carry elsewhere, we simply stopped buying them.

And then I noticed that we seem to be eating the same six or seven homemade dinners over and over: taco casserole, some kind of pasta, tofu stir-fry, vacuum-sealed gnocchi, and Trader Giotto’s frozen pizzas. The latter, which are imported from Italy and baked in wood-fired ovens, are the best frozen pizzas ever; I’d take one over most any soggy-crusted monstrosity from a takeout pizza parlor.

Our reliance on Trader Joe’s boxed macaroni and cheese is likewise unsettling. Luckily, Trader Joe’s sells many items with which you can bulk up its flavor and nutritional value: frozen peas, prepared salsa and frozen, shelled edamame. Even so, there seems to be a gross misunderstanding among many in the cult of TJ’s that if it comes from Trader Joe’s, it has to be good–and more doggedly, good for you. But sadly, this is not always the case.

Trader Joe’s is sorely lacking in quality vegetal fodder. First of all, everything is sold prepackaged, so there’s no poking of melons or prodding of pears. If you only want one apple instead of four, tough luck–and tough apple, because the produce at Trader Joe’s is about as seasonal as the menu at KFC. You’ll see the same blueberries and cherry tomatoes and shrink-wrapped Persian cucumbers in August as you will in December.

The cult of TJ’s is either unaware or unbothered by this, as evidenced by the odd habit that TJ’s devotees have of discussing specific Trader Joe’s items the way sports fans analyze the latest exploits of their favorite team. So deep runs shoppers’ allegiance that some overzealous TJ’s-head on Tribe.net created a “Trader Joe’s or Death” blog where members can post the merits of Ginger Crème Joe Joe’s or cilantro walnut pesto (“Unfucking believable . . . I swear my lips pucker just thinking about it,” gushes Natalie).

Who are these people who have enough time to bond with faceless strangers, rhapsodizing over frozen entrées and snack cookies? Sure, I have pet Trader Joe’s products, too, but I don’t feel that shopping there is part of my identity.

That’s the rub in the cult of TJ’s. For many, patronizing Trader Joe’s isn’t so much a consumer choice as an expression of their lifestyle. While waiting in line with my red plastic grocery basket, I see young professionals on cell phones, moms and dads placating Baby Gap toddlers with Go-Go Grahams, and bachelors of all ages with cartloads of frozen burritos. They, like me, appreciate the price and approachability of Trader Joe’s products–and what we seem to realize is that by making Trader Joe’s our primary food emporium, we distance ourselves from the diversity and reality of food. I never feel less of a connection to my food than I do when shopping at Trader Joe’s.

Mr. Bir Toujour and I are making a concerted effort to break the cycle and look elsewhere for our foodstuffs. Of course, we’re by no means giving up Trader Joe’s. (That would mean no more Trader Giotto’s frozen wood-fired pizza!) And in doing so, we find comfort in knowing that you are what you eat, not where you shop.

Out of laziness more than necessity, I created this homey recipe–inspired by the lowbrow but wholesome food I grew up eating–to be prepared entirely with foods purchased at Trader Joe’s. However, one could easily substitute items from a regular grocery store and achieve similar (and, who knows, perhaps even superior) results. We’ve made a meatless version of this casserole by substituting several crumbled Trader Joe’s Burger Noveau patties for the ground turkey, which works fairly well.

Heat oven to 375 degrees. Lightly grease a 9-by-13-inch pan and set aside. In a large skillet over medium-high heat, cook the ground beef or turkey, breaking apart with the back of a spoon, until browned and cooked through. Drain off most of the accumulated drippings and discard. Add the onion, garlic, cumin and chili powder to the skillet and continue cooking, stirring occasionally, until the onion becomes translucent. Stir in the frozen corn and salsa verde and cook for several minutes, until the mixture thickens just a bit. Taste and adjust seasonings.

Line the bottom of the greased pan with tortillas, making sure not to leave any of the pan’s bottom exposed (it’s fine to overlap the tortillas). Spread half of the meat mixture over the tortillas, then top with half of the drained and rinsed black beans. Top with half of the grated cheese. Repeat layering with remaining tortillas, meat, beans, and cheese. Bake until golden brown and bubbling, about 45 minutes (cover with foil midway through baking if cheese browns to quickly). Let casserole sit 5 to 10 minutes before serving. Makes 4 to 6 servings.