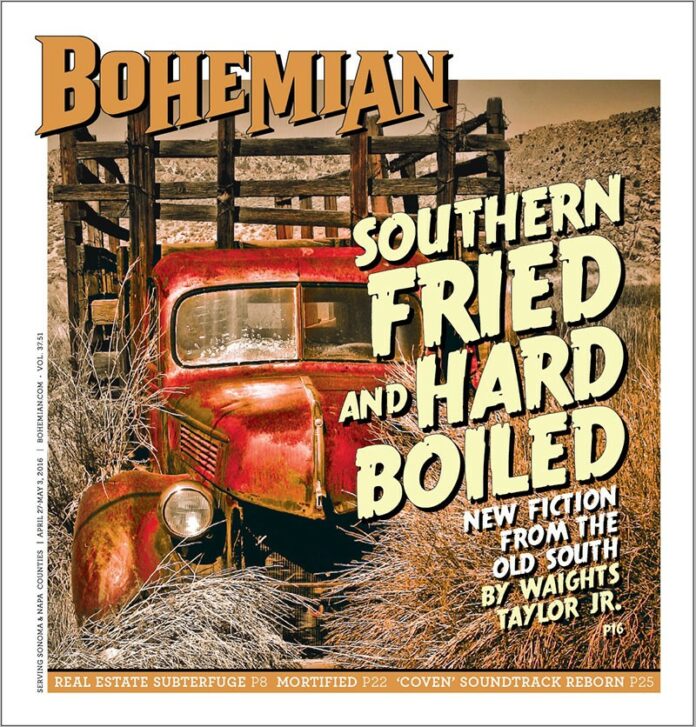 Joe McGrath and Sam Rucker, the crime-fighting, prejudice-battling duo from Alabama, are back in Waights Taylor Jr.’s Touch of Redemption. It’s an entertaining detective novel set in the Jim Crow south of the 1940s written in the deadpan style of James M. Cain.

Taylor was born and raised in Birmingham, Ala., but now lives and writes in Santa Rosa. Before becoming a writer, he worked for 24 years in the aviation industry and then 22 more years as a management consultant.

His first book, Alfons Mucha’s Slav Epic: An Artist’s History of the Slavic People, was published in 2008. His award-winning book, Our Southern Home: Scottsboro to Montgomery to Birmingham—The Transformation of the South in the Twentieth Century, was published in October 2011. Next came more awards with his novel Kiss of Salvation: A Joe McGrath and Sam Rucker Detective Novel, published in 2014.

Enjoy this excerpt from Touch of Redemption.
—Stett Holbrook

Joe drove from Adam’s building back to his mother’s. He wanted to see if he could get in touch with Archie Hamilton. He looked through the local phone directory and found his number.

“Well, I’ll be goddamned. I knows who you are, Joe. Elizabeth and Peter’s son, right?”

“Whatcha doin’ in Montevallo? No more sirs. Call me Archie.”

“I live in Birmingham, Archie, where I worked for years as a homicide detective with the police department. I recently left the department and opened a private detective agency.”

“Good plan. You don’t gotta work for that dimwit Big Bob Watson. What an asshole. You down this way workin’ on a case?”

I’m liking this guy already, Joe thought. “Yeah, and visiting my mother as well,” he said. “I’m trying to learn more about my dad’s murder years ago.”

Archie said nothing. Joe could hear him breathing.

Archie finally said, “Very interesting. Peter was one of my best friends. I was distraught over his death. Anything I can do to help you?”

Joe heard a distinct change in Archie’s speech. He no longer spoke with a pronounced Southern drawl, and his grammar was perfect.

“If you have time today, I’d like to meet and talk,” Joe said.

“After I finish the morning chores, I have to come into town on business. Do you know Julie’s Café on Main Street?”

“How about eleven?” Archie asked.

Joe got to Julie’s Café just before eleven. A few patrons gave him a hard look, as they did most strangers. No one seemed interested in talking to him.

He ordered a cup of coffee and was sipping it when a man you couldn’t ignore walked into the cafe. Probably in his fifties. But it was his height, about six-foot-four, which first caught Joe’s eye. Solid as a rock, he reminded Joe of Sam. He wore clean but well-used blue coveralls over a collarless cotton workman’s shirt, and a pair of scruffy boots. His gray hair fell loose from a sweat-stained straw hat around a sun-creased face, not handsome but pleasing, except for the obvious chaw of tobacco in his jaw.

“Hiya, Joe. Figured that was you. Look like your dad.” He grabbed a chair at the table and swung his leg over the top as if mounting a horse. “Say, do you know Stanford Ramsey? Bigwig in Birmingham. He’s bought several horses from me. Haven’t seen him in a few years. Does he still run the city?”

“Pretty much, and he’s the city’s biggest wig. Yeah, I know him. He doesn’t realize it, but he helped me solve a murder case recently.”

“I reckon Stanford can’t help you down here. So you’ve come to town to nose around concernin’ Peter’s murder? Long time ago.”

“Yep, most folks won’t talk or have little to say.”

Archie turned his head to the left and leaned over a spittoon, and let loose with some tobacco juice. “Not surprised. Probably more skeletons in the closet than we can imagine.”

“What do you remember about it?”

“Mostly how much I miss your father. Like I told you, he was a good friend. Honest and trustworthy to a fault. But he didn’t realize the hatred that swirled around him.”

“Did you attend any of his last days in court?”

“Dad tried to call a hostile witness his last day in court. Were you there?”

“Do you know who the hostile witness was?”

“No. But mighta been Karl Merkel or Wilson Riley. Both are dead. Karl was the Piggly Wiggly store manager. Maybe Klan. Wilson, a service station owner, had a racist chip on his shoulder as big as an oak tree.”

Joe couldn’t help laughing. “Nice metaphor.” His gut told him that Archie was holding back, just throwing him crumbs. He decided it best not to press him. Maybe later. Continuing to make light of the situation, Joe smiled and added, “So the identity of the hostile witness is a big mystery?”

Archie smiled back. “Yep. I guess you got a mystery to solve, private detective,” he said, emphasizing the word private. “Excuse me, I gotta go to my next appointment.”

Archie stood, took a few steps toward the door, and looked back. “Call me if you wanna talk some more.”

Joe sipped his coffee. Hmmm, is that an invitation to talk in private? Maybe too many ears in here.

After lunch in a colored cafe, Sam and Hank walked along Main Street in Montevallo’s six-block white business district. Earlier in the day, they had toured the colored district. As they approached the only movie theater in town, they could read the marquee, The Treasure of the Sierra Madre.

“I want to see that film. I like Humphrey Bogart. Tough guy,” Hank said.

Sam paused, looked at the two-story theater, and said, “I like Bogart too. Colored people sit upstairs, I suppose?”

“That’s the way it is,” Hank said, as a white man walked up to them.

“Who da big darkie with you, Hank? I bet ya boys up to no good,” the white man said.

“This is my friend, Sam, Mr. Dwayne. He’s from Birmingham.”

“I don’t give a shit whar he’s from. Y’all get outta here, now,” Dwayne said as he stepped toward Hank and gestured with his fist.

Sam moved between Hank and Dwayne, who jumped back in fright. Sam glared at Dwayne, when he saw a tall, older white man approaching. He wore coveralls and a soiled, straw farmer’s hat. Sam thought, Goddamn, here comes another redneck.

“Mr. Dwayne just stopped to have a little conversation with us, Mr. Archie,” Hank said.

“Looks like more’n that to me. Whatcha doin’ over here, Dwayne? Can’t find enough coloreds to harass over in Columbiana?”

“I be over here on bidness, and it ain’t none of your bidness,” Dwayne said.

“It’s my business what goes on in my town. You over here workin’ a new still in west county?”

“Ain’t got no new stills, Mr. Hamilton. I jus’ wants these colored boys to get off this here white sidewalk. They knows bettah than to walk along here.”

“Well, how the hell they s’posed to get to the theater or the stores?”

“They oughtta use the alleyway and side entrances what’s for coloreds.”

Archie stared hard at Dwayne and spit a load of tobacco juice near his feet. “Dwayne, take your sorry ass back to Columbiana where you belong. We’ll take care of Montevallo.”

Sam thought there was going to be more trouble when Dwayne glared at the three men as if he was going to say something. Instead he stomped away.

“Good riddance,” Archie mumbled. He turned to Sam and looked him in the eyes, something few men could do. “Don’t believe I’ve seen you in town before. I’m Archie Hamilton,” he said, offering his hand.

Sam shook his hand. “Sam Rucker, Mr. Hamilton. Thanks for the help.”

“You from around here, Sam?”

“No, sir. I live in Birmingham. Down for a few days to see Hank and some friends.”

Just before six o’clock, Joe parked in front of Hank’s home, a two-story Craftsman-style house in a well-kept colored residential neighborhood in Montevallo. Hank and Sam were sitting in a swing on the porch.

As they walked toward his car, Joe asked, “Did Sam behave himself, Hank?”

“He did just fine, ’til we had a run-in with a white moonshine operator and redneck,” Hank said. “He tried to chase us off a downtown sidewalk. He’s a real asshole. He and his brother operate stills and sell white lightning all over the county. They can’t hold down a regular job, but I’m told their hooch is pretty good stuff. Some of their best customers are colored. So they take our money with one hand, then punch us in the face with the other.”

“What was the guy’s name?” Joe asked.

Joe couldn’t believe it. “How old was he?”

“He’s probably not that old,” Sam said. “A lot of racist rednecks look like hell but aren’t as old as they appear.”

“Goddamn, my dad’s colored client in 1923 was accused of killing Darryl. He was Dwayne and Dwight’s older brother. The colored guy testified he saw Dwayne shoot his brother. Christ, if any more ‘D’ names were involved in this, who the shit would know what was going on? So what happened today?” Joe asked.

Hank laughed. “You tell him, Sam.”

“Not much.” Sam grinned. “Just when it looked like it might get nasty, an older white man walked up. Nice guy named Archie Hamilton. He told—”

“You’re kidding? I just talked to him this morning,” Joe said.

“Well, about one o’clock, he told Dwayne to get his ass back to Columbiana,” Sam said.

“Did you talk to Archie?”

“He introduced himself. Asked where I was from. Told him Birmingham.”

“Christ, Joe, this sounds like an interrogation. What gives?”

“Sorry. Trying to figure out if he’s put us together.”

“Doubt it. But it’ll happen soon enough in this small town, especially if we’re seen driving around together.”

“You’re right. But let’s go now. It’s almost dark. Hank, I won’t keep him out late. Us youngsters gotta get our sleep.”

It was less than a mile from Hank’s house to Elizabeth’s, but as in all Southern towns, it was a short leap from one world to another. Joe drove at a modest speed in hopes of avoiding attention. For several blocks, his was the only car on the road until he noticed another car pull out behind them from an intersection and continue to follow them at a discreet distance.

“A car’s been following us for several blocks,” Joe said. “Help me keep an eye on it.”

Sam looked back. “Yeah, I got it. Only one headlight working.”

They were two blocks from Elizabeth’s house when the car turned.

“Okay. Mom’s house is on the next block.”