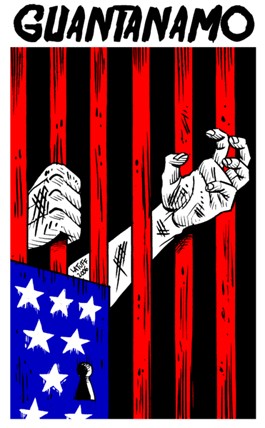 Though located in Cuba, our Guantanamo detention camps are profoundly and entirely American, the fruits of an America that should never have come into being. With one tumbling crash we—once a leading light of justice, freedom and human rights—have flushed humane treatment of others straight down the toilet.

Witness our hysterical fear-jerk following the attacks of 9-11. In an instant, we forgot who we were and what we stood for. Practices for which we sent others to prison and even to the gallows were suddenly deemed legal and necessary interrogation techniques. So-called enemy combatants, many of them entirely innocent civilians sold to our military by profiteering Afghan headhunters, found themselves hooded and shackled on flights half a planet from home. A novel creation fabricated by administration apologists like UC Berkeley’s John Yoo, enemy combatants were stripped of all rights and legal standing. Guilty or not, charged with crimes or no, adult or mere child—hundreds were stripped of the writ of habeas corpus and subjected to “enhanced interrogation techniques,” otherwise known as torture.

But out of darkness there often comes art. Guantanamo: Honor Bound to Defend Freedom, tells the documented stories of five Gitmo detainees using their own words from letters and interviews to create a theatrical interpretation of terrorism. Co-written by Guardian foreign correspondent Victoria Brittan and novelist Gillian Slovos, Honor Bound premiered in London, but has since drawn rave reviews in major cities across America. In part benefiting Sonoma County Veterans for Peace, this local production is directed by Chris Ginesi and depicts our nation’s “war” on terrorism.