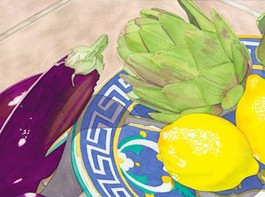 Painters give voice to the creative source

Not many remember that Winston Churchill was a damned good painter. Though he didn’t pick up the brush until he was 41 years old, he completed some 500 paintings over the course of his life. Churchill is known to have said that when he got to heaven, he meant to spend “a considerable portion of my first million years in painting, and so get to the bottom of the subject.”

Getting to the bottom of the subject would indeed take the millennia, but for the one single short life they have here, a surprising number of people have decided to do it like the statesman did, one canvas at a time. Many of those participating in the 14th annual Art at the Source open studio event slated for western Sonoma County May 31&–June 1 and 7&–8, have never held high office, been PM or, indeed, defeated Hitler. Rather, they’ve made their quick swivel on Earth rich by pursuing art as a full-time profession.

Art as an actual profession, one almost as grave as Churchill’s day job, is generally pooh-poohed by the mainstream. But a serious profession it is, and in 2006, the nonpartisan Urban Institute compiled a report on what artists need to survive and why it might be worthwhile to help provide them with such. The report’s abstract calmly states that health coverage, housing and studio space are among a professional artist’s biggest obstacles, adding, “Compounding these material problems is the fact that the public often views the profession of ‘artist’ as not serious. The way artists earn a living may seem frivolous, and artists are often seen as indulging in their own passions and desires which bear no relation to the everyday experiences of most workers.”

Not that this seems to daunt anyone. In response to a poll of Art at the Source artists organized by Graton painter Janet Moore, some 43 percent of the 111 respondents said that being an artist was their only career. Yes, the poll’s guidelines allowed them to have had more humble jobs within the fine arts and to take time off for family, but almost half have never done anything else. Thirty-one percent became professional artists after pursuing other careers, and 26 percent of the respondents have slung the odd plate of hash or pounded many hot days’ worth of nails, taking non-art jobs to pay for the milk.

From those in the middle category who came to the art profession after a different career, their previous jobs are as various as having done groundbreaking work studying the ship-ballast water transport of nonnative fish to formerly being a software entrepreneur to giving up a lucrative magazine publishing gig to being a material-science engineer to teaching 20 years at high school to having the de rigueur desk job in arts administration.

With open studios exploding with color in the summer, we offer a short roundup of voices as Art at the Source painters express the feeling:

[U]nexpectedly, out of the blue, my only brother passed away and . . . my life shattered.

I had been painting for eight years and even opened a successful gallery in Freestone [the Gatehouse Gallery], but after I lost my brother, I knew I had to paint full-time. “If not now, when?” was the mantra. And I have never looked back. Not once. This is it for me, although I joke about going to law school or starting a career in aluminum-siding installation. Painting is my joy. All the experiences I have had contribute to my work. Instead of “climbing the ladder of success”, I prefer to make a wild and colorful tapestry with my life.—Janet Moore

I was a late bloomer to art. I started painting at age 50 after selling my software company. I graduated from Stanford with a masters in statistics and have worked as an expert witness, loan-portfolio analyst, inventor, software entrepreneur . . . and, most recently, philanthropist.—Jim March

I have been an artist since I was six years old when I discovered I loved coloring almost anything. . . . Using abstract expression as my method, I allow the image to come alive and through my energetic and visual responses, it takes form and comes to completion.—Suzanne Jacquot

When I had the opportunity to take art classes as a child I did, but as far as a career, I was going to be a doctor or a lawyer. When I got to college, I took two non-majors art courses to fulfill my general education requirement in my sophomore year. Ceramics unexpectedly became my passion and, much to the dismay of my family, I changed my major to art with an emphasis in ceramics. In order to marry what I love to do with something that would financially support me, I spent an additional year in college and received my teaching credential. . . . My paintings capture and “rescue” moments in time. We all live in such a fast-paced existence that I hope my paintings create an opportunity for viewers to slow down for a moment, spend some time and explore.—Sally Baker

Art in the ‘Open’

While the Marin County Arts Council just concluded its countywide official open studios tour, the independent Pt. Reyes Open Studios is slated for this weekend, Saturday&–Sunday, May 24&–26, from 11am to 5pm. Call or see website for map. For details, call 415.456.2382 or visit www.pointreyesart.com.

Looking north, the Sixth Annual Anderson Valley Open Studios tour also takes place Memorial Day weekend, May 24-26, at various locations along Highway 128 in southern Mendocino County. Studios are open from 11am to 5pm each day. For details, go to www.gomendo.com or call 707.895.3093.

Art at the Source, an open studios event sponsored by the Sebastopol Center for the Arts and focusing on artists based in western Sonoma County and featuring those mentioned in this article, runs May 31&–June 1 and June 7&–8. The preview exhibit runs through June 8 at the center, 6780 Depot St., Sebastopol. For details, go to www.sebarts.org or call 707.829.4797.

The Arts Council of Napa Valley presents its open studios the last two weekends of September, Sept. 20&–21 and 27&–28. For the first time this year, the event is juried, which has brought the number of artists down slightly but brings the level of the work up hugely. A preview exhibition is planned at Mumm Napa Cuvée Aug. 22&–Sept. 6, with a meet-the-artists reception slated for Sept. 5. 8445 Silverado Trail, Rutherford, 707.967.7740. While the jury selection process is over, questions may be directed to Kathy Lund, [email protected] or 707.257.7016.

Sonoma County’s ARTrails celebrates its 23rd year Oct. 11&–12 and 18&–19 with 144 artists participating in a juried show that opens with a reception on Sept. 27 at the Arts Council Gallery, 404 Mendocino Avenue, Suite C, Santa Rosa. On Oct. 5, the Graton Gallery complements the tour with its own opening at 9048 Graton Road, Graton. For details, go to www.artrails.org or call the Arts Council at 707.579.2787.