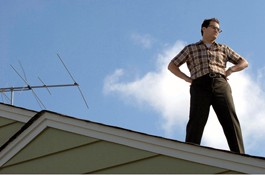 The 'Serious' disadvantages of not being God, one of the Coens' best

It’s a very serious movie, A Serious Man. All the themes in the Coen Brothers’ previous films blend harmoniously. Here they reconcile the warring impulses to create apocalyptic tragedy and screwball comedy. Here, as in Raising Arizona, is the startling cartoon flatness of the United States. And here is the hideo-comic wrath of Americans and the way temper flares up so suddenly out of whimsical, friendly men. Here is the balance, as in Fargo,of what morality costs and what it’s worth. A Serious Man is a vast Jewish joke that follows Kafka’s suggestion that in the struggle between you and the world, back the world.

It’s set in suburban Minneapolis in 1967, close to the place and the time in which the Coens grew up. In high-angle shots, the neighborhood is as remote as Mars: wide empty streets, square houses embedded in crabgrass, seething neighbors. A meek professor, Larry Gopnik (stage actor Michael Stuhlbarg, looking like a dispirited Harold Lloyd), teaches physics at a small college. As was the case for “Lucky Jim” Dixon, Gopnik is tantalized with the possibility of tenure by the head of the math board, a monster of passive aggressiveness.

One afternoon, a Korean exchange student tries to bribe Gopnik into a passing grade. Thus begins the siege against him. Larry’s wife announces that she’s deeply in love with their neighbor Sy Ableman (Fred Melamed), a clammy, polyester-clad swine; Melamed’s unforgettable acting depends heavily on an oleaginous voice, though this touchy-feely homewrecker is appalling on so many other levels. Larry is pushed out to the Jolly Roger Motel. With him comes his unemployable brother, Arthur (Richard Kind), an obese holy fool with weaknesses of the flesh.

For reverse angles, the Coens follow his son Danny (Aaron Wolff) and the boy’s bovine indifference to his father’s woes. The marital struggles are but interferences to Danny’s own routine of watching F Troop, smoking marijuana and trying to cheat his way through his upcoming bar mitzvah. Larry gets the promise of mercy from his next-door neighbor (Amy Landecker), a bronzed, deadpan siren who, like Danny, is tuned in to the San Francisco sound.

The postmodern moments give A Serious Man a vaudeville kick: a prologue about the appearance of a demon in the old-time Jewish ghetto is staged like a lost episode of Mario Bava’s Black Sabbath. In another of this film’s parables, a Hebrew message is carved by God into the teeth of a gentile to teach—what? Some indecipherable lesson, like the physics equations on Larry’s chalkboard, like the Hebrew letters Danny is too dumb to learn. Even the leer of the Red Owl drug store sign, peering out of the screen, seems pregnant with terrible meaning.

What seemed like caricature in the earlier Coens’ films is softer here. A Serious Man suggests very lightly that there might be some hope in the old rituals, something basic and kind. Photographer Roger Eakins and composer Carter Burwell do wonderful work making these episodes coalesce into a powerful fever dream of persecution and encroachment. As in Kafka, every avenue of escape is displayed just so the workers can rush up to nail the “No Exit” sign. And as when reading Kafka, what keeps one from sinking into despair is the rich, heady humor. A Serious Man throbs with age-old mysteries to which one can only succumb, with the hope of being released into pain-free nothingness.