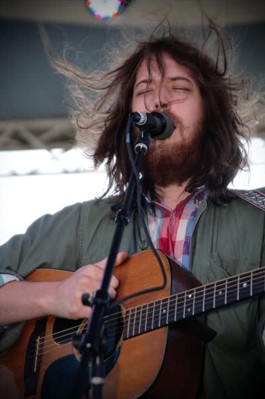 How to run a music festival that works

San Francisco’s Treasure Island Music Festival is a festival for people who hate festivals so much that they recoil at reading the word “festival” so many times in the festively laden festival of this sentence. I’ve been to it every year, and have consistently been amazed by how other music festivals can suck so bad while Treasure Island, slated for Oct. 17&–18, always rules. Here’s why.

It’s Small Most music festivals have multiple overlapping stages, which is terrible for diehard fans whose favorite bands play at the same time. At Treasure Island, there are only two stages, so a quick walk across a 100-yard stretch is all it takes to not miss a note. It’s easy to get close to the front, and you don’t need the “Where the Hell Am I?” iPhone app to find your friends.

Bands Really Do Hang Out with Fans This is a selling point for a lot of festivals, but it rarely delivers. In the last two years at Treasure Island, I’ve seen Jack White and Spiritualized’s Jason Pierce hanging out and talking, I’ve seen the members of CSS in line for the Ferris wheel, I’ve seen Okkervil River’s Will Sheff wandering around drinking a beer, I’ve seen Spoon’s Britt Daniel on the side of the stage watching Built to Spill, and I’ve seen M. Ward waltzing through the crowd. And that’s without a VIP ticket. Which reminds me.

VIP Tickets Aren’t Worth It Yes, this is an asset, because it means you’re not tempted to shuck out the extra money. Oh, sure, if you’re hell-bent on sitting far away from the stage on bleachers, go right ahead, but most will want to save the extra $60 and be part of the action. Treasure Island’s VIP area boasts its own cocktail lounge and bathrooms, but both have lines just as dreadfully long as the “regular” area.

Minimal Corporate Advertising The corporate-rock days of the ’80s and ’90s were utterly depressing, reaching a low point when Elliott Smith went on tour flanked by Miller Genuine Draft banners on either side of the stage. That sort of garbage still exists in weird Live Nation pockets of the world, but not at Treasure Island, where corporate logos are limited to Heineken, and that’s ’cause it’s for sale.

Electro Saturday! Indie Sunday! Any moron putting on a festival could do some simple math and calculate a dramatic surge in ticket sales by commingling genres and spreading the lineup over both days. Thankfully, since its inception, Treasure Island has booked electronic and hip-hop acts on Saturday and indie rock bands on Sunday, making it nice for the Justice fan to not have to suffer through Tegan and Sara.

No Damn Cars All attendees park for free at AT&T Park in the city, and the shuttles that run to and from the island are efficient, free and they’re ultra-fancy inside. I’ve never waited more than 10 minutes for a shuttle, and the shared excitement with fellow fans is something you’d never get by paying $20 to park alone in a dusty field.

The Bands Don’t Suck Festivals are often dumping grounds for washups like the Red Hot Chili Peppers, but Treasure Island consistently finds relevant bands. This year is a well-curated mix of rising stars Grizzly Bear, Passion Pit, MGMT, Beirut and Girl Talk alongside familiar favorites like the Flaming Lips, Yo La Tengo, the Decemberists, DJ Krush and the Walkmen, among many others. Believe it or not, it’s the festival’s weakest lineup in its three-year history, which is saying something.

You Won’t Get Bored Instead of agonizing while Bob Mould lulls nostalgia hounds to sleep, why not hit up the myriad tents full of strange art projects and interactive games? A full-on 1980s video arcade debuted in 2007, and last year, I spent a half-hour winding a piece of yarn around a series of nails with complete strangers. The sun hung low behind the Golden Gate Bridge, and I wasn’t at the godforsaken Shoreline Amphitheatre under a Nike banner while nonstop street-teamers stuffed crappy AFI promo swag into my hands. Life was good.

Now if they could simply supply free tap water and not sell tickets through Ticketmaster, it’d be the best festival in California.