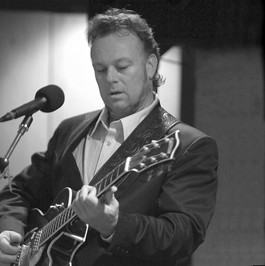 To those who first met David Carter the way I did (he once bummed a cigarette from me at a bar and we slammed Pale Ale while talking about the brilliance of John Prine), the Trailer Park Rangers frontman’s new album, A Strange Kind of Blue, will cause a mild shock. The soft, plainly enhanced cover art is pastel pink and blue, with a four-poster bed floating in a sun-kissed ocean behind the shirtless, serious artist. The songs have female backup singers, tambourines, major seventh chords, egg shakers, synthesizers, piano and flamenco guitar. It is, at first, really weird. And then it works.

For years, the Trailer Park Rangers have brandished ragged-but-right living and smart, roughshod country songs, and Carter’s Australian upbringing brought a unique jackrabbit-and-Jack Daniels bent on Americana music. But with A Strange Kind of Blue, Carter has created a modern cool, channeling a noirish Chris Isaak on “Las Vegas Honeymoon”—all coy whisper falling on bossa nova tom-tom triplets—and the spirit of the first rainfall of the season with the sentimental “Montana, New Orleans,” a hybrid of Jay Farrar and Roy Orbison on a chilly Thanksgiving Day parade float. He’s set down the well-worn acoustic guitar to lean against a lounge piano and wonder in song if he is the life of the party, like an earnest Richard Harris but with less bellowing.

In this, Carter has taken an enormous risk by leaving the tried-and-true twang to the tumbleweeds and wearing his heart on his shoulder, venturing intrepid into cabaret and jazz, and it pays off very well. Variety, especially, is key. A muted trumpet on “Whitey Ray” reminds listeners that the phrase “kind of blue” is hidden in the album title, and flamenco recitations and fast nylon-string runs on “I’m Sewin’ Time” change the pace entirely just before the sweet closer, “California.”

Whether Trailer Park Rangers fans will embrace A Strange Kind of Blue is dependent on how open-minded they will be to listening closely for nuance and heart. A tip: close your eyes, think of your first love, think of apple cider and wind-blown rain and backroads and candles. And then go see David T. Carter and the Trailer Park Rangers on Thursday, Oct. 15, at the Last Day Saloon. 120 Fifth St., Santa Rosa. 8:30pm. $20, includes CD. 707.545.2343.