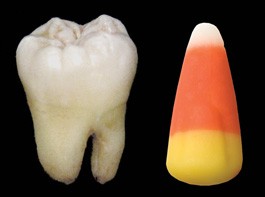 How much candy can one cajole out of little kids after Halloween? “The very first year I got 14 pounds,” says Dr. Stephen Berger. Of course, it’s easy if you’re paying. Every year on Nov. 1, Berger, a pediatric dentist in Santa Rosa, offers a candy buyback program out of the parking lot of his office in Santa Rosa. Paying a dollar for each pound of candy turned in, Berger estimates that he now collects over thirteen hundred pounds of candy every year, paying out of his own pocket.

Berger started the program in 1974 as a response to media coverage of Halloween treats laced with razor blades and other dangers. Inspired to make trick-or-treating safe again, he began the buyback program to eliminate fear of contaminates and, in an issue obviously close to his profession, to help eliminate tooth decay.

Each year his program has a different theme. This Monday, a tooth fairy will be present along with a giant inflatable slide and a free raffle for a chance to win a bicycle. Also on buyback day, brochures and pamphlets will be available. “With all the childhood obesity and increase in diabetes, this goes beyond the teeth factor,” says Berger. “We’re hoping to educate the kids.”

Though other dentists in the North Bay have adopted similar buyback programs, Berger notes his operation is the largest: “Nobody I know does it on the scale I do,” he says. Since his oldest daughter is joining his practice, chances are the next 26 years of buying back candy will be successful. “She’s actually the third-generation Berger practicing pediatric dentistry,” says Berger. “I’m extremely proud.”

The burning question: What happens to that half-ton of candy Berger collects? He throws it all away.

A Recipe for Change