It’s tough to pick one standout memory from the Kendall Jackson 2012 Heirloom Tomato Festival. There were dozens of chefs serving a variety of tomato-themed samples, a copious amount of wine, a great Latin band, the giant centerpiece tent with over a hundred different types of tomatoes cut up for sampling, the lovely weather, the interesting people, the interesting outfits, celebrity sightings, beautiful scenery—it’s almost too much to take in at once. Luckily, this annual event seems to get better each year, but get your $85 general admission tickets early; this one sold out in advance.

Starting with the food, because that’s probably the main draw, it was a mix of local restaurants and a host of others food purveyors, with catering companies and tomato product companies. Upscale plates like savory tomato and bacon bread pudding from John Ash mingled with Everyman food like wood-fired pizza with tomatoes and pork cracklins from Johnny Garlic. Then there was the unique, like the tomato, watermelon and mint gelato from Fiorello’s, which had a long line most of the afternoon.

There were seminars on wine tasting and a competition between two Top Chef contestants, but with so much food and wine to try I didn’t get to see any of them. I did hear the music, as the Carlos Herrera Band played several sets throughout the day, and the Latin flavor could be heard throughout the grounds. Very good sound system, as well. Top notch, all the way around.

The tomatoes were the star of this day. Under the central tent, over 175 different varieties were up for sampling, varying widely in taste and names. Some are named after taste, some after appearance, and some, like God Love, are named by the whim of the grower. Personally, I would name them all after Pokémon. When I ran out of Pokémon, it would transfer over naturally to names of bosses from the Megaman video game series. If there were any left after that, maybe start naming them after the sayings on Frank Rossitano’s hats in the sitcom 30 Rock.

Some dishes that stood out to me were either fantastically original, extremely creative or simply perfect. One such dish was the tomato sushi from JoAnne & Jimmy, a catering company of sorts from San Francisco. They host pop-up dinners from time to time and Jimmy, also known as Culinary Institute of America-trained Master Chef James Corwell, uses his imagination and skills to create interesting menus. He’s been perfecting this sushi for years and hopes this 4-month-old company will help create a buzz for this and other specialties.

He starts with great sushi rice, forms it for nigiri and dabs a bit of wasabi on top. Then he carefully fillets tomato, removing the skin and seeds, placing each piece atop a bed of rice before wrapping it with a thin seaweed seatbelt. The result is an incomprehensibly accurate visual representation of maguro tuna, but it’s completely vegan. It tastes great, as well, with the familiar taste of sushi rice and the unexpected flavor of tomato combining into a new sensation that wouldn’t leave my mind. 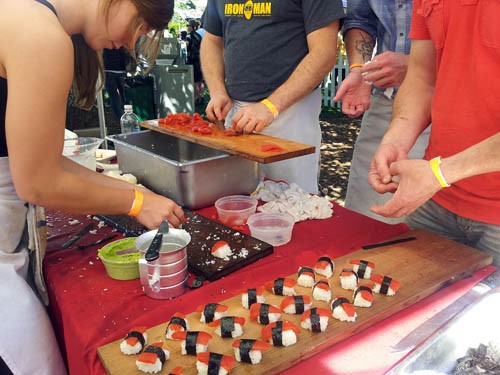 Another dish that captured my imagination was the scallop on toasted tomato bread with clear tomato gazpacho from Bistro Boudin in San Francisco. Yes, it’s the same company that makes the sourdough bread. But the bistro is upscale, and chef Misael Reyes wanted to create something special for the festival that would really highlight tomato without forcing it to be the focal point of the dish. His scallops were delicious, and the bread for the toast points he made from scratch, folding tomato puree into the dough. The highlight was the gazpacho, which he says was clarified for four hours through strainers and cheese cloths to finish as a semi-opaque, very flavorful shooter of tomato soup in a totally un-traditional way. If the voting boxes hadn’t been collected before I went to cast my vote, this would have been my choice. 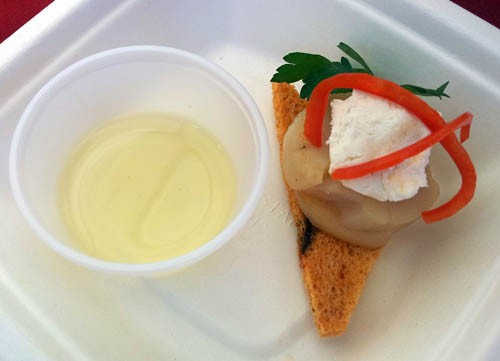 Reyes said he had never made tomato bread or tomato gazpacho before this attempt, and seemed happy with how it turned out. He says he might have had a different opinion, however, if it were he and not his sous chef that did most of the strenuous straining of the soup. 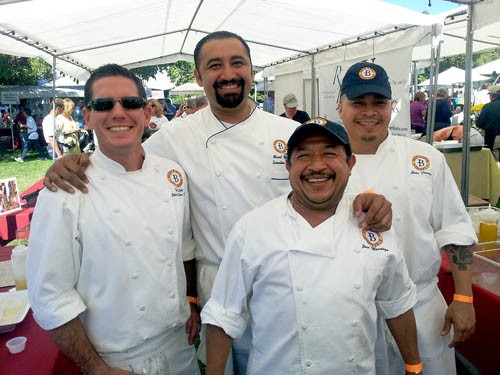 Right next to Reyes and his crew was a sweet tomato dish that stood out to me, the heirloom tomato and apricot spice jam bars with oatmeal streusel by chef Reneé Pisan at Chloe’s French Café in Santa Rosa. These little gems were perfect in consistency, not too sweet and packed with tomato flavor, with just the right amount of oats on top for texture. 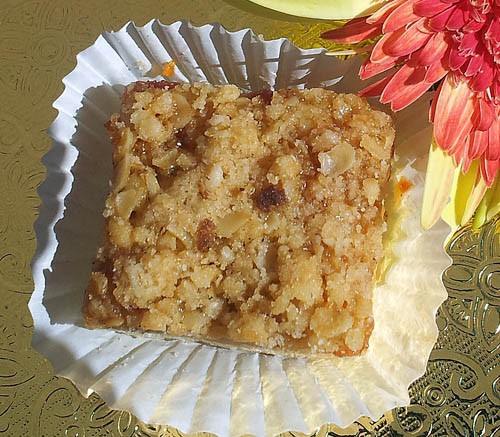 It was so balanced, and the combination of apricot and tomato made a great jam. I could spread that on toast, make a sweet pizza, dollop it in yogurt or just spoon it into my mouth like a slob. I don’t care, I just want more of it. 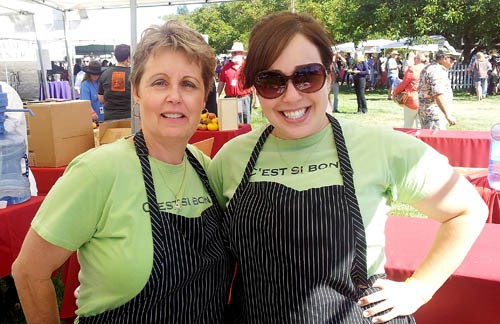 The weather was perfect, the grounds are beautiful, outfits ranged from shlubby to stunning and even traffic and parking weren’t that bad. This was the 16th KJ tomato fest, and already I’m planning on how to get in next year. The cadre of volunteers seems able to handle every task, from chopping tomatoes to delivering water to pouring wine, and I suspect the abundance of eager free labor has something to do with free admission to the festival. Either way, hats off to them; these tomato enthuiasts made everything run smoothly.

Guy Fieri was there, and he was cool and pretty down-to-earth. We talked for about 10 minutes about how much he really thinks the North Bay is the best place on Earth. As much as I tried to find something to find fault with about the guy, because we all know controversy sells more than praise, I couldn’t disagree with him on that one. But really, bro, outta my league? Let’s let her decide that one. 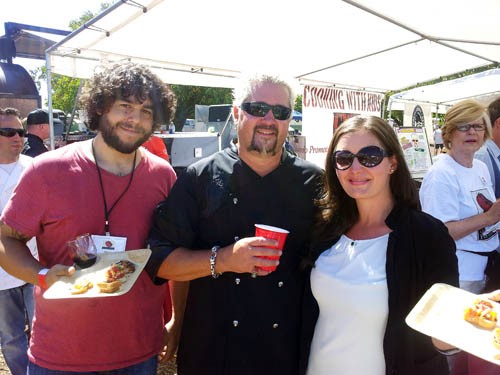