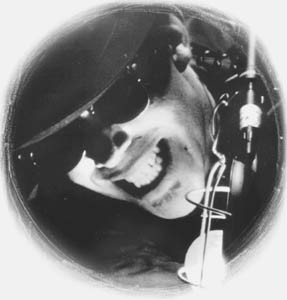 It’s a double whammy. Almost four years after the release of his Grammy-winning Mule Variations CD–arguably his most accessible material–singer-songwriter Tom Waits is following in the footsteps of Bruce Springsteen and Guns N’ Roses, who both famously released two albums on the same day.

Waits–an Occidental resident whose boozy beat poetry and eccentric song forms have made him the quintessential Bohemian–is set to release two new CDs on May 7. Waits and his wife Kathleen Brennan reportedly have wrapped up production on a pair of theatrical concept albums, Alice and Blood Money. The British rock magazine Uncut calls the two albums “startlingly different in landscape, sound, emotion, and composition.”

Of the two, the most is known about Alice, which Uncut goes on to accurately describe as “filled with unforgettable, haunting, opiate-dark tunes from an adult fairy tale.” Indeed, a bootleg of demos from Alice, recorded in 1992, has been making the rounds for years. And it’s fantastic. The songs comprise the score to Robert Schmidt’s stage production of the same name, a dark retelling of Lewis Carroll’s Alice in Wonderland, for the Thalia Theater in Hamburg, Germany. It wasn’t the first time that Waits worked with the experimental theater company: Two years earlier, he collaborated with playwright Robert Wilson and author William S. Burroughs on The Black Rider, which spawned the album of the same name.

But while that score is marked by edgy dissonance, the stripped-down, acoustic-based songs on Alice include some of Waits’ most beautiful melodies (or beautiful maladies, as Waits might say). Among the instruments used on the recording are bowed double bass, theremin (the proto-electronic device popularized by the Beach Boys on “Good Vibrations”), stroh violin, waterphones, and an odd string instrument called the bug. “Table Top Joe,” kind of a metallic, gamelan-influenced number about lost dreams (and sung to Alice by the Caterpillar in the play) is one of Waits’ catchiest tunes.

Ultimately, Alice is a mini passion play about love, lust, betrayal, and murder–a sort of Cabaret-on-laudanum that ranks with Waits’ best work.

Less is known about Blood Money (originally titled Red Drum), except that the album’s songs were inspired by the plight of the fictional Woyzeck, a poor soldier driven mad by medical experiments and an unfaithful wife. The album has been described as Tin Pan Alley meets the Weimar Republic, a dense, textured, rhythmic work replete with tarantellas, lullabies, and waltzes. Who could ask for more?

Life stinks–E (aka Mark Oliver Everett) wants you to know that. The main man behind the ironic rock-meets-trip-hop band the Eels, he and his bandmates rock hard on their newly released two-CD Souljacker (Dreamworks), the follow-up to 2000’s wry, witty Daisies of the Galaxy (and a pair of contributions to the Shrek and How the Grinch Stole Christmas soundtracks). On Souljacker, the Eels team up with British rock guitarist and multi-instrumentalist John Parish (Sparklehorse, Giant Sand) for a conceptual look at moral bankruptcy. Of course, the Eels are no strangers to songs that tackle life’s heavier themes–their 1996 college-radio breakthrough hit “Susan’s House” alone focused on homelessness, mental illness, and drive-by shootings. And just in case you miss the subtle messages, E has included the Rotten World Blues EP for good measure. Life should stink so good.