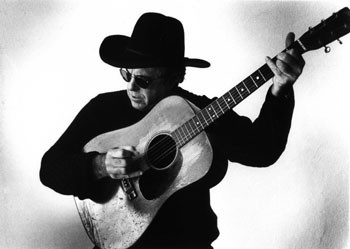 Song of Myself: Tom Russell is drawn to individuals and their stories.

He’s been described by All Music Guide as “perhaps the finest American folk-roots artist that most Americans never heard of.” Born and raised in Los Angeles, singer-songwriter Tom Russell grew up immersed in the lore of the American West and has shown a real knack for penning insightful songs that evoke the broken dreams heard in the best cowboy music. It’s a talent that hasn’t escaped music critics and other recording artists. Johnny Cash has recorded Russell’s songs, as have k.d. lang, Ramblin’ Jack Elliott, and a host of others.

His affinity for exorcising the ghosts of the American spirit can be heard on Modern Art, his newly released collection of original songs and cover tunes.

“Yeah, we’re on the record trail,” Russell says dryly during a cell-phone call from his car “somewhere outside of Boston” and on his way to New York City for a show with Dave Alvin and Nanci Griffith, both of whom have recorded his songs and collaborated with him in the past. Russell’s latest tour brings him to the Powerhouse Brewing Company next week.

On the new album, the sense of loss–of a way of life or of long-cherished values–is delivered in tightly realized tales with world-weary vocals and a reporter’s eye for detail.

It’s a recurring theme that colors many of his highly reflective songs, songs that often probe the dissolution of the social contract or shine a light on the sad soul of working-class Americans for whom the dream soured long ago. For instance, “Gallo de Cielo,” one of Russell’s earliest compositions, describes the efforts of a young man trying to buy back the family farm.

The ghostly “U.S. Steel,” one of his best songs, was inspired by a 1987 newspaper article in the New York Times in which the reporter interviewed mill workers sharing a last meal of sauerkraut and kielbasa at a bar in Homestead, Pa., while reflecting on the impending closure of the mammoth U.S. steel plant there. The wistful song serves, not only as a snapshot for the repercussions of Reaganomics and the 1980s recession, but also the betrayal that severed bonds which held American society together for two centuries.

In recent years, Russell has vaulted past other so-called Americana artists by crafting a pair of critically acclaimed concept albums. The 1999 album The Man from God Knows Where is a song cycle about the rigors of mid-19th-century settlers in the Midwest. The album marked the fruition of an eight-year project in which Russell wove together traditional American songs and evocative originals, inspired by his own ancestors, to look into the heart of the American heartland.

In 2001 he returned with yet another ambitious concept album. The highly autobiographical Borderland used the tensions in the El Paso-Juarez area as a metaphor for the often turbulent emotional landscape that lies between a man and a woman.

But Russell insists that Modern Art should not be viewed as a concept album. “It may seem like an American-themed record, but I really was just trying to step away from the last theme of the border and the end of a 20-year relationship with somebody,” he explains. “I tried to get away from the rotten-relationship songs and instead covered some of my favorite songs by some of my favorite songwriters.”

Still, he returned to the theme of loss on the new album, which includes three songs that consider the regrets of American icons in the twilight of their lives. “The Kid from Spavinaw,” the best of the three, has been hailed as the greatest song ever written about Mickey Mantle. “Muhammad Ali” ponders the inner life of the once agile boxer crippled by debilitating disease. And Russell includes a cover of longtime collaborator Carl Brouse’s excellent “American Hotel,” which recalls 19th-century songwriter Stephen Foster’s passing as a penniless alcoholic. Brouse died just weeks before the recording session.

“I guess that I am interested in the changing nature of America,” Russell concedes. “I mean, I grew up right after World War II, and America went through a tremendous period of change at that time. Also, I was trained a bit as a sociologist, and of course as a fiction writer I am interested in telling people’s stories. And loss is a very dramatic theme. But I don’t want to bullshit you; I don’t think in terms of the big picture. I really am simply drawn to the story of individuals and what they’ve gone through in their life.”

Expect more of the same in the future: Russell is working on a new concept album that will chronicle the history of his sister-in-law and her family’s upbringing on a Spanish land-grant ranch in California. “It will be an aural history–a book and a record,” he says. “Hopefully it will be out in a couple of years.”