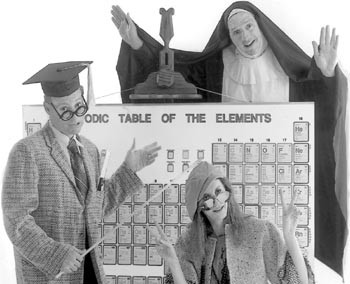 GOOD CLEAN FUN. Unless he was being facetious, those are surely three words Harvard-bred mathematician (qua satirical songwriter) Tom Lehrer never associated with his black-humored ditties “Poisoning Pigeons in the Park” and “The Masochism Tango.” Yet that’s what they have become.

Penned during Lehrer’s brief sojourns from academia in the mid-’50s and again in the early ’60s, the University of Santa Cruz professor’s oeuvre has undergone the test of time. The diagnosis? What was once thought malignant and anti-establishment has become benign, adolescent, and silly. And that might be precisely what the doctor ordered.

The Cinnabar Theater’s Quicksilver II Theater Company administers a healthy dose of the unabashedly puerile material in the form of Tom Foolery–The Words and Music of Tom Lehrer, brought to the stage by director Michael Fontaine and musical director Jason Sherbundy.

Framed as a quasi-seminar of the prof’s work, the production features Cinnabar triumvirate Michael Fontaine, Elly Lichenstein, and Dwayne Stincelli traipsing through nearly 30 tunes, alighting on canned segues replete with ye olde quips, and one-liners between numbers. The shtick is thick, the patter patent, but the quaint revue works splendidly, though Lehrer’s gallows humor does leave some ring around the collar.

At their best, Lehrer’s songs recall Mad Magazine’s studied riffs on popular culture, sporadically crackling with Monty Python-like surrealism. However, clammy humor of the Weird Al variety abounds, and some attempts to put schisms in one’s isms fall short, owing to the relaxed social mores of the ’90s. Somewhat antiquated, many songs are little more that the lyrical equivalent of a Bronx cheer, but others are buoyed by Fontaine’s efforts to update them. “Smut” (an ode to all things prurient), for example, gets a face-lift with an apt reference to the Starr Report.

Fontaine shows off his splendid, croon-to-loon vocals in his rendition of the Mr. Rogers-like “My Home Town,” a ballad of neighborly decay that recalls author Sherwood Anderson’s grotesques. Fontaine’s deadpan delivery sells the campy tune.

Lichenstein’s performance of “The Irish Ballad,” a protracted narrative relaying the exploits of a Gaelic Lizzie Borden, is well executed, as is her torch-song solo “Wienerschnitzel Waltz,” which she performs with an appropriate nod to Marlene Dietrich.

Likewise, Stincelli stops the show with his solo, “The Masochism Tango,” replete with riding crop and copious acts of self-flagellation.

The three performers complement one another well, and their onstage enjoyment occasionally rises to infectious heights. Ultimately, Tomfoolery, it seems, is a preservationist effort–required viewing for students of counterculture, past and present.

From the January 7-13, 1999 issue of the Sonoma County Independent.