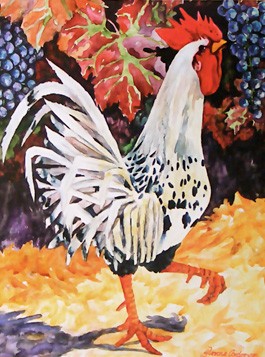 It’s a fine April Sunday, there’s no need for disagreement. Joyride to the coast or winetasting? We can do both in the Sonoma Coast, a sprawling, 40-mile viticultural area that resembles the dough left over after the cookies have been cut out. Those with a dog in the hunt prefer to speak of the “true Sonoma Coast,” where, if vineyards do not exactly sweep down to the very edge of the cliffs, the cool Pacific breeze is felt every day.

The source of much hush-toned Pinot, this forested hinterland might as well be some moon of Endor, as far as the casual winetaster is concerned. Enter the Sonoma Coast Wine Tasting Room, installed inside the landmark Timber Cove Inn during a remodel. The rotating lineup includes local notables like Hirsch, Flowers and Peay. MacMurray Ranch’s bright 2009 Sonoma Coast Pinot Gris ($27) is crisp and sweet with lychee and pear cocktail—might pair well with seafood and vegetables from the kitchen, where new executive chef Riley Huddleston is mixing it up with contemporary innovations like liquid-nitrogen-blanched asparagus. Just the way the vintner likes it, remote Wild Hog Vineyard’s 2007 Pinot Noir ($28), with aromas of redwood bough and wild raspberry, is deliciously sweet, soft and jammy all the way through.

Thirty minutes north, family-owned Annapolis Winery commands views from above the fog line and is a favorite wedding spot. Where Russian immigrants planted apple trees 150 years ago, Basil and Barbara Scalabrini started their vineyard in 1978, watering by hand. “We weren’t hampered by any knowledge of farming,” says Barbara. But at least one of the “water bucket crew” ventured back; after studying at UC Davis, Aron Scalabrini took over as winemaker and vineyard manager. Their Gewurztraminer is the clear favorite, and sold-out for now; with pretty plum aromas, the 2006 Sonoma Coast Cabernet Sauvignon ($34) has a long, agreeable finish. Yes, you heard “Sonoma Coast Cab.” The fog has lifted.