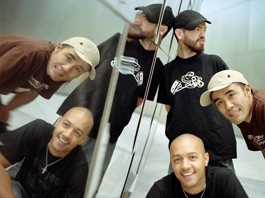 Three for the Treble

Hip-hop is full of shoulda-beens. Currently filed in Los Angeles’ urban dead letter office is an expertly crafted recording representing the multiracial makeup of that city. Made by a black and Asian rapper with a white DJ, it’s hard to say why the 2005 album Fly School Reunion, by Giant Panda (above), never took off. Throughout, MCs Maanumental and Chikaramanga wrestle the polyrhythmic beats of Newman in pure Angeleno style: smooth, hot and confident, even interpolating A Tribe Called Quest’s “Midnight” (you know the transaction) to pay tribute to the golden era in the “’90s.”

Sebastopol’s own Smoov-E has occupied a similar spot of obscurity in Bay Area hip-hop, with the usual reason offered (“He’s white”) that unfairly simplifies his unique aesthetic as the Ron Jeremy of hip-hop. Not hard enough for the gangsta contingent, yet too persona-driven for the backpackers, Smoov-E may be the tightest dude ever to actually rock a player piano and a bullhorn.

Sex plays heavily in Smoov-E’s raps, but within that approach his methods are as tricky as a pick-up artist; he’s international spy Long Duck Dong one second, ’70s disco king Larry Dallas the next. His latest incarnation, Rusty Squeezebox, “the Fornicating Cowboy,” debuts on Saturday, May 24, at the Raven Theater, 115 North St., Healdsburg. 8pm. $20. 707.433.6335.

Finally, to fully spin heads into a tizzy, the affable and laid-back Devin the Dude comes to town this weekend in a rather underpromoted but no less exciting North Bay debut. The Dude pops up in the zaniest places—on Carson Daly, in Treal TV and on Dr. Dre’s Chronic 2001 album, wedged, for one brilliant verse, between Snoop and Dre—and this weekend, he’s at the Flamingo Hotel, of all places. Pool party afterwards, by chance?

With one of the most conversational styles in hip-hop, the Texas prattler eschews an aggressive flow for a more ruminative, distracted result; his awkward pauses are as much a part of his success as an MC as his humorous outlook. Devin’s the only rapper ballsy enough to name his album To the X-Treme after Vanilla Ice’s best forgotten crapolafest, and “Doobie Ashtray” is a comical, in-the-know description of herb gettin’ ganked by roommates. He appears with guest DJs and comedians on Friday, May 23, at the Flamingo Hotel, 2777 Fourth St., Santa Rosa. 7pm. $30&–$35. 707.545.8530.